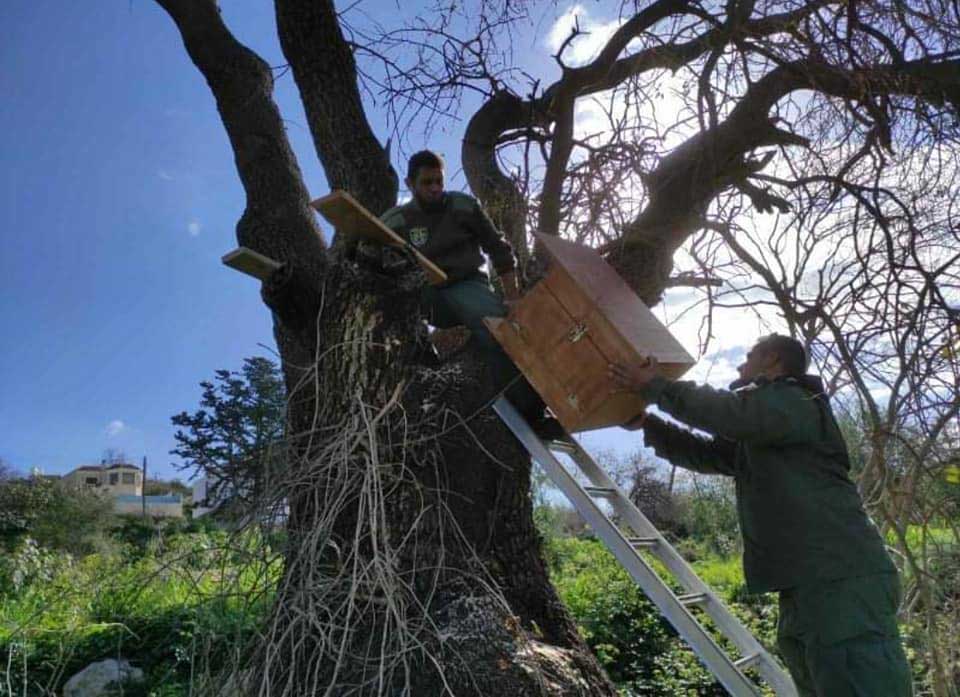 Six artificial bird nests suitable for barn owls have been installed in Chlorakas in a move welcomed by the local community leader.

The installation of the man-made nesting boxes is part of a pan-Cypriot installation programme which aims to increase the population of owls and the biological control of rodents to help eliminate the need to use chemicals..

“The department of agriculture and the game and fauna service in cooperation with Chlorakas community council have placed six artificial nests suitable for Tyto Alba, (barn owls) in the area. It is hoped that it will increase the population, which are also a good and natural way to fight the rodent population,” community leader Nikolas Liasidis said in a statement

Pilot efforts to install artificial nests have been made in various areas of Cyprus, which were hailed as a great success, according to the ministry of agriculture.

Many areas, which in the past suffered from rodents, now use only the installation of artificial nests, an action that is environmentally friendly and respectful of human health, the ministry noted. More than 400 nests have been installed so far and another 100 are in the works.

“Artificial nests serve two purposes. First of all they help birds find safe and satisfying nesting areas and therefore contribute to their population recovery. Also, they help promote the biological fight against rodents, a method that is more economical and, more importantly, safer for human health since it is free from chemical poisons and preparations that serve this purpose,” Liasidis said.

According to BirdLife Cyprus, which started the pilot project in 2015 to use barn owls as pest control agents in farming as an alternative to using rodenticides/ The project was implemented together with SPNI (BirdLife in Israel) with funding from the Tassos Leventis Conservation Foundation.

Rodenticides are used very extensively in Cyprus. Some 300 tonnes of bromadiolone 0.25 per cent, a potent second generation anti-coagulant rodenticide, is used annually in the countryside. These are distributed at a subsidised price to local communities who then distribute them to farmers to control rodents that damage trees and crops.

The barn owl (Tyto Alba) is a nocturnal bird of prey who with its excellent night vision, incredible hearing and silent flight, hunts and eats up to 1,000 rodents per year.
”In Cyprus, thanks to the project, nest boxes for barn owls and for kestrels are being installed in specific areas in collaboration with farmers. Relevant workshops also take place to provide information to farmers as well as relevant authorities,” BirdLife said.
Barn owls mainly hunt within a short 1km radius around their nest, sometimes ranging up to 4.5km away, so it is imperative to make sure that there is no poison use within this radius, otherwise barn owls will risk dying from secondary poisoning.

“The crucial period is when people stop using rodenticides up until the point when barn owls occupy the nest and start ‘working’ the area. During that time, it is important for farmers to be patient and accept that the rodents may increase temporarily.”
An increase in the population of owls aims to cover the main areas affected by rats, which have mushroomed into large numbers in various areas of Cyprus in recent years, noted Liasidis.

Their diet includes rodents, reptiles, amphibians, birds and small mammals. From scientific studies that have been carried out in various areas in Cyprus and elsewhere, over 90 per cent of the birds’ diet consists of rodents, said the ministry. Each adult bird can consume 4-6 rodents each night and this number increases if there are young to be fed.

A pair of barn owls feed on thousands of rodents a year, Liasidis concluded.

Our View: The curious resurrection of the co-op demise