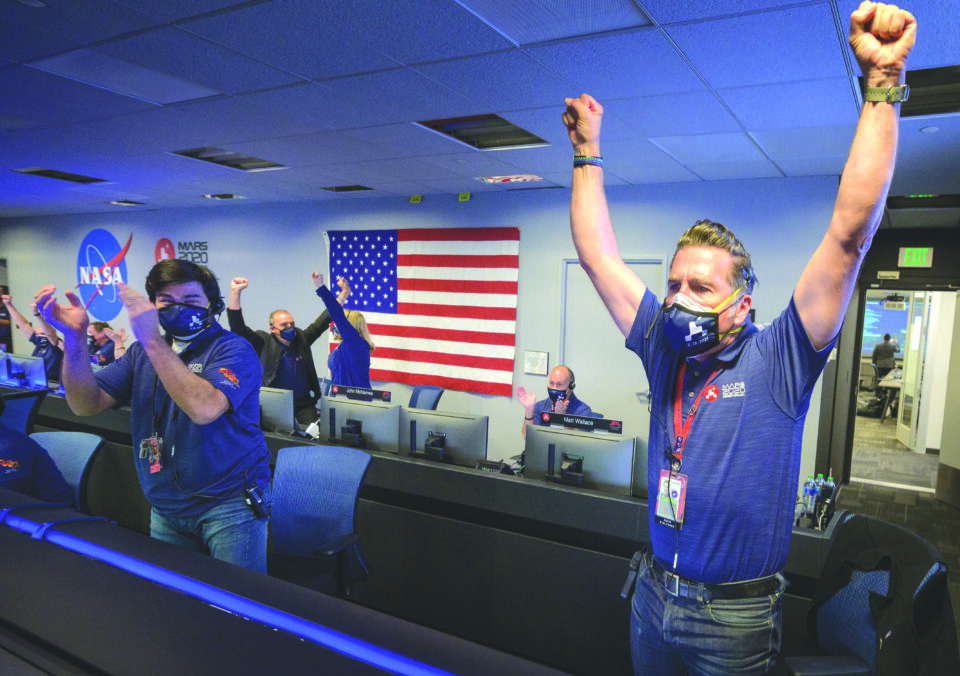 When Nasa’s Perseverance rover touched down on Mars Thursday night, this astonishing success rightly grabbed attention across the globe.

Yet, it is also worth remembering that the six-wheeled, astrobiology lab is only one of three Martian expeditions currently exploring the Red Planet.

Indeed, while once upon a time, outer space was the domain of superpower rivalry and comic book fantasy, these days, the Great Beyond is home to a much wider range of interplanetary interlopers.

A huge number of nations now have space agencies, with countries from Portugal to Venezuela now in orbit.

These ‘non-traditional’ players – together with private companies like SpaceX and Virgin Galactic – make up a global space industry that is now one of the world’s most lucrative sectors.

Last year was a banner year for these interplanetary folk, too, with Covid-19 apparently having zero impact on a packed programme of launches and new missions.

According to US space advocate the Space Foundation, some 1,200 spacecraft were deployed in 2020 – triple the total for 2019.

Meanwhile, communications satellite deployments were up 477 per cent, year-on-year.

In this context, Turkey’s announcement on February 9 that it will have a lander on the Moon by 2023 should have come as no surprise.

Indeed, if anything, Turkey will be somewhat late to the party, as this year alone, landers and rovers from nine different countries will be on the Moon, searching for ice, scooping up Moon dust and measuring solar radiation.

China, meanwhile, expects an Earth-Moon economic zone worth around $10tn to be fully operational by 2050.

The PR department of the Turkish Space Agency (TUA) was therefore faced with a major challenge getting its message heard through all the interstellar chatter.

Their answer, it seems, was a 2001: A Space Odyssey-type obelisk, which appeared suddenly in the heart of Anatolia, similar to those that appeared a few months back around the US.

The obelisk was inscribed in the old, Turkic Gokturk alphabet with a message that said: “Look at the sky, you will see the Moon” – a phrase then repeated by President Recep Tayyip Erdogan at the February 9 launch of Turkey’s lunar programme.

“Our feet will be on earth,” Erdogan added, “but our eyes will be in space.”

This announcement – which was widely lampooned on Turkish social media – also came a few days after another major milestone in the new space age.

That was the news that another ‘non-traditional’ space nation, Turkey’s wealthy regional rival the UAE, had successfully deployed its Hope spacecraft into orbit around Mars.

Miss my landing? Catch the highlights below.

Send us your own highlights too. Share your pictures and video using #CountdownToMars. pic.twitter.com/OL2wSAi36e

Indeed – as ever – space is about far more than science.

As with the great US-USSR rivalry during the Cold War, today’s smaller space nations are engaged in more than just improving weather forecasting when they launch.

Turkey, for example, uses its network of military satellites to relay information to and from its highly effective combat drones.

Indeed, nowadays, a coming together of new and cheaper technologies, private sector competition and multi-polar geo-political rivalries is making the vast vistas of outer space both more dangerous ­– and more overcrowded – than ever.

While shooting a massive lump of solar panels and circuitry beyond the ionosphere used to cost millions of dollars and involve major rocket power, recent times have seen all that transformed.

The first orbiting active telecoms satellite was Telstar I, built by AT&T and Nasa and launched back in 1962. Costing some $500m at 1962 prices, it was cutting edge at the time – even reputedly inspiring the design of new World Cup footballs.

It also weighed 171kg and could transmit one TV broadcast or 400 phone calls across the Atlantic – badly – during a 20 minute daily window.

In contrast, the most recent new generation ‘CubeSat’ built by students at Khalifa University in Abu Dhabi, MySat-1, weighed less than a kilo and cost only a few thousand dollars.

Nowadays, too, a private company such as Spaceflight will launch such a device for you on a ride‑share rocket for as little as $295,000.

Miniaturisation and digitisation account for much of this change, along with the development of new, lightweight materials.

At the same time, there have been major changes on the demand side of the space market, as GPS and smart phone usage has grown exponentially.

Space Foundation figures show that in 2018, for example, governments and companies spent a total of $415bn on satellite-based entertainment, weather forecasting and other services.

“Space has become much more pervasive and cheaper,” says Dr Scatteia. “Combine these two factors and you have the how and why more countries are making an effort in space and launching space agencies.”

This proliferation is also now coinciding with a major surge in launches by private space agencies and companies.

Leading the charge with this is Elon Musk’s SpaceX. This has plans to launch some 12,000 StarLink broadband internet mini-satellites by the mid-2020s.

While astronomers fear these giant satellite clusters will block out areas of the night’s sky, they will also likely eventually add to the growing problem of space junk, when they break down or fragment in deteriorating orbit.

The latest European Space Agency data on this says that as of 8 January, 2021 there were some 128 million objects of human origin in orbit round the earth.

Most of these are tiny – fragments of satellites, rocket boosters and other equipment – but some 28,210 are large enough to be regularly tracked, while 34,000 objects are larger than 10cm.

Even a tiny object can rip a large hole in a passing space ship, too, given the speeds involved – the International Space Station, for example, tears along at some 28,160 km/h.

“It’s one of the biggest challenges,” says Dr Scatteia, “but also a great opportunity, as cleaning up this material can also be a task for satellites.”

Indeed, robotic junk collectors armed with nets, lasers and harpoon guns are also now on the cards for Earth orbit.

Amongst the objects they might find too, is Telstar 1.

While this pioneer ceased operating back in 1963, it still passes daily, across Cyprus’ northern skies, some 58 years later.

Our View: Authorities need to tolerate a little civil disobedience