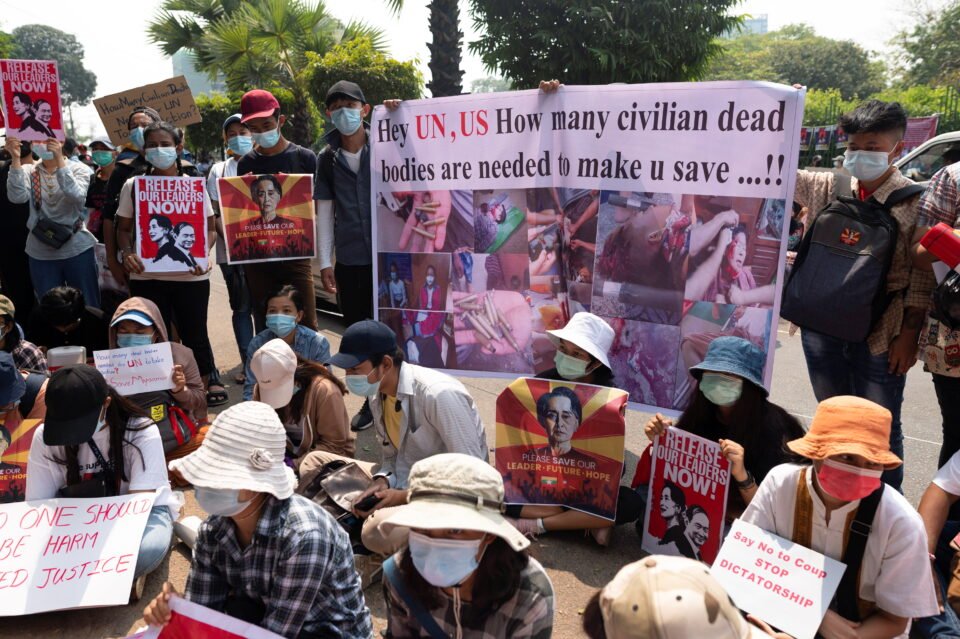 Demonstrators protest against the military coup in Yangon, Myanmar

Many thousands of opponents of Myanmar‘s Feb. 1 military coup marched on Sunday in towns from north to south, undeterred by the bloodiest episode of their campaign the previous day when security forces opened fire on protesters, killing two.

Early on Sunday, police arrested a famous actor wanted for supporting opposition to the coup, his wife said, while Facebook deleted the military’s main page under its standards prohibiting the incitement of violence.

The military has been unable to quell the demonstrations and a civil disobedience campaign of strikes against the coup and the detention of elected leader Aung San Suu Kyi and others, even with a promise of a new election and warnings against dissent.

In the main city of Yangon, thousands gathered at two sites to chant slogans, while tens of thousands massed peacefully in the second city of Mandalay, where Saturday’s killings took place, witnesses said.

In Myitkyina in the north, which has seen confrontations in recent days, people laid flowers for the dead protesters.

Big crowds marched in the central towns of Monywa and Bagan, in Dawei and Myeik in the south and Myawaddy in the east, pictures showed.

“They aimed at the heads of unarmed civilians. They aimed at our future,” a young protester in Mandalay told the crowd.

Military spokesman Zaw Min Tun, who is also the spokesman for the new military council, has not responded to attempts by Reuters to contact him by telephone for comment.

He told a news conference on Tuesday the army’s actions were within the constitution and supported by most people, and he blamed protesters for instigating violence.

The more than two weeks of protests had been largely peaceful, unlike previous episodes of opposition during nearly half a century of direct military rule to 2011.

But if the numbers on Sunday are anything to go by, the violence looks unlikely to silence opposition.

“The number of people will increase … We won’t stop,” said protester Yin Nyein Hmway in Yangon.

The trouble in Mandalay began with confrontations between the security forces and striking shipyard workers.

Video clips on social media showed members of the security forces firing at protesters and witnesses said they found the spent cartridges of live rounds and rubber bullets.

U.N. Special Rapporteur for Myanmar Tom Andrews said he was horrified by the deaths of the two in Mandalay, one of them a teenaged boy.

“From water cannons to rubber bullets to tear gas and now hardened troops firing point blank at peaceful protesters. This madness must end, now,” he said on Twitter.

The state-run Global New Light of Myanmar newspaper said the strikers sabotaged vessels and attacked police with sticks, knives and catapults. Eight policemen and several soldiers were injured, it said.

The newspaper did not mention the deaths but said: “Some of the aggressive protesters were also injured due to the security measures conducted by the security force in accordance with the law.”

Suu Kyi’s National League for Democracy (NLD) condemned the violence as a crime against humanity.

A young woman protester, Mya Thwate Thwate Khaing, became the first death among anti-coup demonstrators on Friday. She was shot in the head on Feb. 9 in the capital, Naypyitaw.

Hundreds of people attended her funeral on Sunday.

Military media said the bullet that killed her did not come from any gun used by police and so must have been fired by an “external weapon”.

The army says one policeman has died of injuries sustained in a protest.

The army seized power after alleging fraud in Nov. 8 elections that the NLD swept, detaining Suu Kyi and others. The electoral commission dismissed the fraud complaints.

Facebook said it deleted the military’s main page, known as True News, for repeated violations of its standards “prohibiting incitement of violence and coordinating harm”.

Lu Min has been prominent in demonstrations and is one of six celebrities wanted under an anti-incitement law for encouraging civil servants to join in.

The Assistance Association for Political Prisoners group said 569 people have been detained in connection with the coup.

Western countries that condemned the coup decried the latest violence.

The United States, Britain, Canada and New Zealand have announced sanctions with a focus on military leaders but the generals have long shrugged off foreign pressure.

Suu Kyi faces a charge of violating a Natural Disaster Management Law as well as illegally importing six walkie-talkie radios. Her next court appearance is on March 1.

Easy to draw parallels between Denktash and Tatar