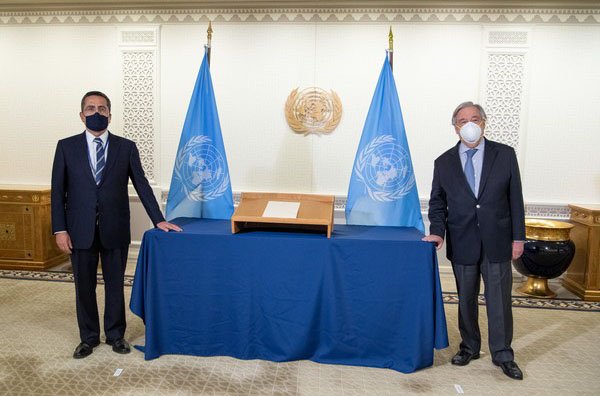 UN Secretary-General Antonio Guterres has told the new permanent representative of Cyprus to the UN that the international organisation and he personally are “committed” to Cyprus and its people and has repeated his intention to convene an informal meeting 5+1 on Cyprus soon so that a serious negotiating process can begin.

Guterres was speaking at an official ceremony during which Cyprus’ new permanent representative to the UN Andreas Hadjichrysanthou presented his credentials.

Cyprus, the UN Secretary General said, is an important part of the UN, adding that both the organisation and himself personally remain committed for Cyprus.

Guterres recalled his own engagement and commitment both in the past when Portugal held the EU Council presidency and now as UN Secretary General, especially during the negotiations at the Conference on Cyprus in Crans – Montana.

We are creating now the conditions to convene soon the informal 5+1 meeting so that we can begin serious talks and a negotiating procedure, he noted.

I would like you to know how committed we are to Cyprus and its people, Guterres said.

On his part, Hadjichrysanthou conveyed to the UN Secretary-General President Nicos Anastasiades’ warm regards and reiterated his full commitment and support for the informal 5+1 meeting to be convened aiming for the urgent resumption of substantial and result oriented negotiations to reach a comprehensive, viable and lasting settlement based on a bicommunal, bizonal federation with political equality as is set out by the relevant Security Council resolutions and EU principles and values.

Meanwhile, the discussion on the arguments of the Greek Cypriot side on key issues through a “fermentation of ideas”, took place on Monday night during a meeting of a group of lawyers and constitutionalists in Nicosia.

CNA reported that the main object of the meeting was the preparation of specific issues, topics and questions on which opinions have been submitted in writing.

Pending the announcement of the date of the five-party conference, the discussion concerns “all issues raised on the Cyprus issue, both legal and political”, while it also touches on key constitutional aspects.

According to a source familiar with the discussions, “we cannot know what, how and when it will happen so “it is good to prepare for everything.”

Some of the main issues that concern the group were the positions expressed by the Turkish and Turkish sides on the Cyprus issue on a two-state solution and “sovereign equality”.

The first meeting of the group took place in December, followed by other meetings, in the presence of four academics and members of the negotiating team, including chief negotiator Andreas Mavroyiannis, the former foreign  minister Ioannis Kasoulides, the director of the office of the president and former MEP Panayiotis Demetriou, former director general of the ministry of foreign affairs Tasos Tzionis and AG Giorgos Savvides.