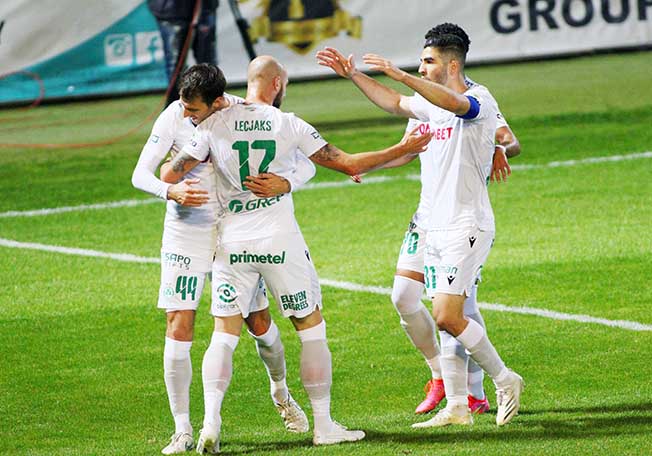 The first weekend of the playoffs in the Cyprus football championship sees Salamina and Enosis kicking-off the action in what is a must-win game for the Famagusta club.

Enosis are currently 11th with 24 points, five points away from Salamina in 10th place, and will want to cut the gap between themselves and safety down to two points.

Conversely, a win for Salamina, combined with a potential loss for Ermis against Doxa, can create an eight-point cushion for the club.

On Sunday, Olympiakos will face Omonia in a game with far more importance for the visitors than the home side.

Despite that, Olympiakos chairman Christoforos Tornaritis said that his team did not make the top six to just go through the motions and has stated that Olympiakos will go into every game wanting to win.

“I do not consider it a surprise that we made the top six. It was justice being served. Olympiakos proved on the pitch that it has been one of the best three sides of the season. Our position in the table being lower than that is down to well-known reasons, the Covid outbreak and more,” Tornaritis told Cypriot outlet Kerkida.

“I was chairman of Olympiakos in the past, from 2001 to 2005, and in all of those instances I managed to get Olympiakos into the top six. So no, I do not consider it a surprise, more of a relief considering all the things we went through,” added Tornaritis.

“The last phase of the season. We keep pushing for honours,” wrote the Nigerian on his Twitter profile.

Omonia have had a little back-and-forth with Apoel over an incident in their recent cup game involving a foul given against Apoel forward Ben Sahar and Omonia defender Michael Luftner.

“Luftner has possession of the ball while the opponent steps on his heel and brings him down”, wrote Omonia next to a clip of the incident.

“We are sad that we had to post this but we had to do it to protect our player and prevent Apoel from adding pressure on the match officials for the return leg”, added Omonia.

Apoel returned with a post of their own showing a different incident from the game involving Jan Lecjaks and Apoel forward Joe Garner.

“Let’s compare the Luftner incident with an incident from a few minutes earlier in the game,” wrote Apoel in their post.

“Unfortunately, the defender stepped on more than just our player’s heel,” the post concluded.

Meanwhile, Apoel board member Giorgos Georgiou spoke to local radio station Super Sport and provided an update on the state of the club.

“Due to the club’s financial condition we have decided that financial advisors to the club need to create a three to five year plan so that we know how we can maneuver in the future,” Georgiou said.

Finally, the government has provided an update on the potential for the return of fans to stadiums.

“We have to be very careful with any relaxations”, said Health Minister Constantinos Ioannou.

“Any events which bring a lot of people together sharply increase the risk of infections. Over the next two to three months we will continue to be deprived of certain things,” Ioannou added.

“Some measures will continue to exist until there is enough vaccine coverage and the estimate for this is June. We ask for everyone’s cooperation so that measures are adhered to,” Ioannou concluded.