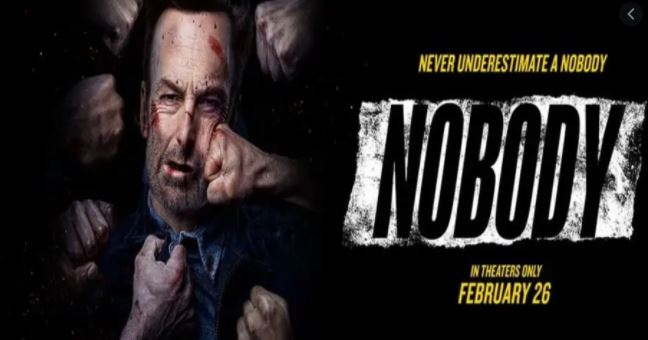 Poster for the film "Nobody," to be released on March 5.

A film called Nobody is to be released on Friday – it tells the story of an innocent person who inadvertently becomes the target of a vengeful drug lord.

Know who’s going to see it? Nobody. Attendance at cinemas is down more than 90 per cent in the US. In the UK, cinema attendance is at its lowest on record, with £1 billion wiped off box office sales last year, according to researcher Omdia. Fewer people will go to the movies in the UK this year than did when cinemas first appeared in 1928.

There have been fundamental changes in people’s attitudes towards moviegoing, trends that will probably continue after the global pandemic passes, according to Walt Disney  Chief Executive Officer Bob Chapek.

‘Consumers are probably more impatient than they’ve ever been before, particularly since now they’ve had the luxury of an entire year of getting titles at home pretty much when they want them,’ Chapek said Monday at a Morgan Stanley media and technology conference. ‘I’m not sure there’s going back.’

The company will ultimately let consumer behaviours guide its decisions on the theatrical windowing front. ‘We certainly don’t want to do anything like cut the legs off a theatrical exhibition run,’ commented Chapek. He acknowledged inevitable changes to the traditional screening method, where a movie could be out of theatres for months and still not available for home viewing. ‘This isn’t viable anymore.’

While the wave of restrictions designed to slow the spread of the coronavirus have undoubtedly devastated cinemas worldwide, movie theatre attendance has been on the decline for some years now. Variety magazine reported that despite box office titans like ‘Avengers: Endgame’ and ‘The Lion King’, 2019 saw a 4.6 per cent plunge in US box office admissions.

Movie theatres reopened in August across the US Here is how box office receipts have clocked in every single month after that when compared with the same period a year before.

In fact, statistics show that theatre attendance peaked in 2002, so while streaming sites like Netflix (available from 2007) have no doubt exacerbated the problem, the start of the trend cannot be attributed to this. In fact, the cinema as an institution has been on the decline for a long time. Before broadcast TV was invented, an estimated 60 per cent of people went to the cinema at least once per week. In recent years, the average person has visited a cinema once every 3 months.

Compounding matters for cinema owners, film rental has increased dramatically over the last few decades. In 1970, just 27 per cent of the ticket price was paid through to the film producers by the cinema, whereas today, primarily driven by studios’ increasingly hegemonic power, the figure stands at an average of 57 per cent. This may provide an inkling as to why prices for snacks and drinks at Cinema’s are notoriously high.

Already squeezed by studios, it is easy to see why cinema chains worldwide were enraged by HBO’s pandemic-driven decision to upload new movies to their streaming site, HBO max, at the same time as the films were available in cinemas. If this trend materialises over a larger portion of the market, depriving cinemas of their modern-day raison d’être – priority screening, it’ll beg the question: Why visit the cinema anymore?

Thomas Castillo, a film professor at the BGS University in Ohio says that the cinema’s place as something of a social institution will not fade quickly. ‘The nature of the human being is a gathering body, not a be-alone body. At the movies, they can live with the people on the screen, enjoying it amongst other people, laughing together, crying together.’

Additionally, while big TVs are getting cheaper, the cinema still offers an unparalleled viewing experience. Wall-to-wall picture, a controlled absence of light pollution and thunderous surround sound continue to draw customers, as evidenced by the increasing box office market share for the ‘Action’ movies over films from other genres over the last half-decade. While a light-hearted romcom may hit the spot watched on a 10-inch iPad, it’s hard to imagine ‘Godzilla’ packing the same punch without the seat-shaking bass to accompany the beast’s signature roars.

While the pandemic has caused the cinema industry significant hardship, moving forward it also provides the opportunity for the business models of a time-honoured tradition to loosen up and better meet the challenges of the digital world. Cinemas may opt to move away from the traditional priority-screening business model, and look towards showing blockbusters and classics form over the years for the film aficionados who don’t want to see Covid-19 put an end to the century-old experience of cinema.

Some industry observers claim that no change is necessary, however. ““By 2022, we are going to be firing on all cylinders again as an industry,” Thomas Richards, CEO of the exhibition chain Vue, told The Guardian in an interview. “And by 2023 we are going to be setting records again, particularly given the film slate. Once the Covid lid is lifted you are going to see record-breaking numbers come out because we know there is a pent-up demand.”