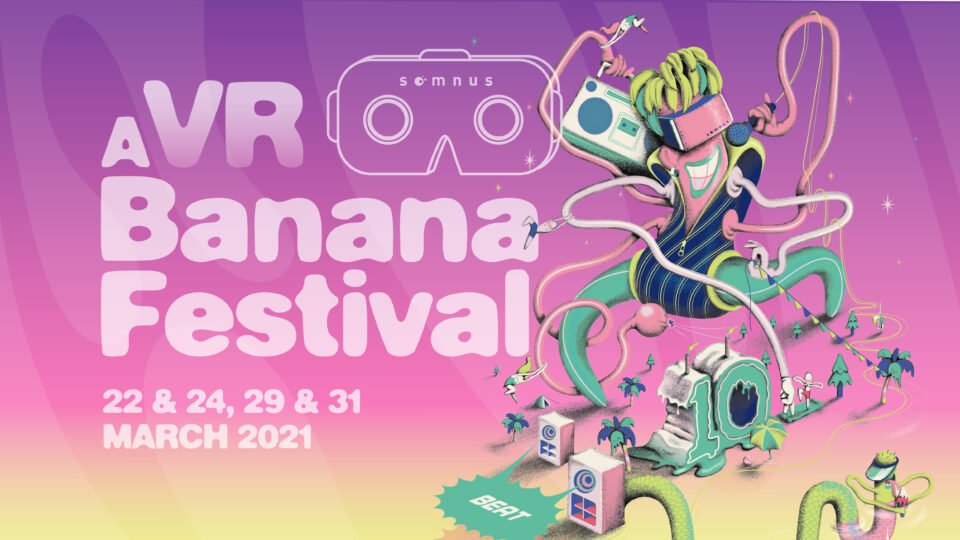 Determined not to let another year go by without immersive cultural experiences and community engagement, the team behind the popular AfroBanana Festival are inviting the public to the island’s first-ever Virtual Reality music festival. Taking place over four days this March, the aVR Banana Festival is set to be the revelation of 2021, pushing the boundaries of what can be done in VR.

The event will be hosted on a new VR app called somnus. Created in 2020 as a collaboration between ABR Alternative Brains Rule and Silversky 3D, the app is designed to reinvent cultural experiences by defying the restrictions and limitations of the physical world.

And what better way to launch the app than by hosting a unique music festival. Featuring nine acclaimed local and international acts over two weekends, aVR Banana Festival will take place in two alternate digital dreamscapes, created exclusively by two Visual Artists – and designed to represent the specific music genre theme of the week.

aVR Banana Festival has already captured the attention of the global music scene, with some huge names signed-up for what promises to be one of the most exciting line-ups the island has ever seen.

Week One (on March 22 and 24) will unfold in the Organic Universe, with an impressive line-up of World and Funky Jazz music featuring international artists The Gaslamp Killer; The Dude; as well as local talents Chunky Funky, Fuzz Bus and DJ Koulla P Katsikoronou.

Week Two (on March 29 and 31) will take place in the Electronic Universe, with a rocking line-up of Techno Disco artists including Inland and Local Suicide from Berlin; and renowned local names Afrofox and DJ 616.

Participants at the free event will be sent a pair of special VR goggles in the post, which they will use to enter the somnus app via their mobile phones. As the app is still in the beta stage, capacity is limited, so for those open to new experiences and interested in being a part of this cultural milestone in Cyprus, sign up for the waiting list and follow Afrobanana on social media to find out more. Those who don’t make the list will be invited to watch the live 3D Video link.

“After months of starvation,” says the ABR team, “this is your chance for a meaningful cultural experience and an opportunity to re-engage with your fellow music and art lovers. So, shake off the dust and join us for a revolutionary event, unlike anything you’ve ever experienced before.”

The first VR music festival of Cyprus. Organised by the ABR team on the new VR app called somnus. March 22, 24, 29, 31. Free. Sign up is required: https://bit.ly/aVRsignup