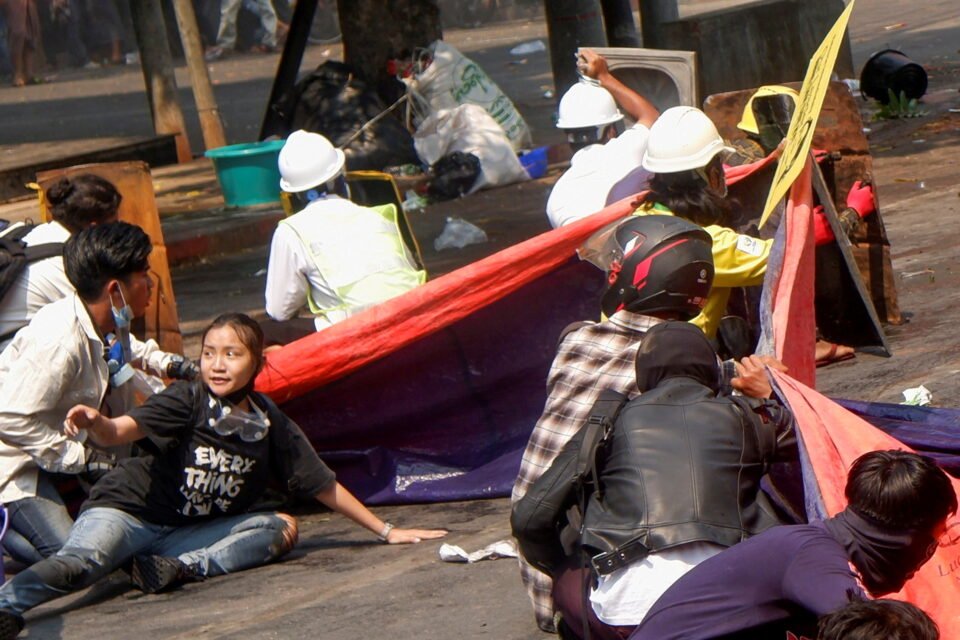 Protesters lie on the ground after police opened fire to disperse an anti-coup protest in Mandalay, Myanmar, March 3, 2021. Among them, Angel, 19, bottom-left, also known as Kyal Sin, took cover before she was shot in the head. REUTERS/Stringer TPX IMAGES OF THE DAY

Myanmar pro-democracy activists were back out on the streets on Thursday to demonstrate against military rule a day after the United Nations said 38 people had been killed in the most violent day of unrest since last month’s coup.

Police opened fire to break up a protest in the town of Pathein, to the west of Yangon, early on Thursday, media reported, but there were no immediate reports of casualties.

On Wednesday, police and soldiers opened fire with live rounds with little warning in several cities and towns, witnesses said, a day after neighbouring countries had called on the junta to show restraint.

Regardless of the danger, activists said they refused to live under military rule and were determined to press for the release of elected government leader Aung San Suu Kyi and recognition of her victory in the election in November.

“We know that we can always get shot and killed with live bullets but there is no meaning to staying alive under the junta,” activist Maung Saungkha told Reuters.

In some parts of Yangon, protesters hung sheets and sarongs on lines across the street to spoil the view of police aiming their guns. They also uncoiled barbed wire to reinforce barricades.

Five fighter jets made several low passes in formation over the second city of Mandalay early on Thursday, residents said, in what appeared to be a show of military might.

U.N. special envoy on Myanmar, Christine Schraner Burgener, said in New York that Wednesday was the bloodiest day since the Feb. 1 coup with 38 deaths, bringing the total toll to more than 50 as the military tries to cement its power.

A rights group and some media have given different numbers of wounded and killed in Wednesday’s violence. The dead included four children, an aid agency said. Media reported that hundreds of protesters were arrested.

A spokesman for the ruling military council did not answer telephone calls seeking comment.

Suu Kyi’s National League for Democracy party said in a statement that flags would fly at half mast at its offices to commemorate the dead.

Schraner Burgener said she warned Myanmar deputy military chief Soe Win that the military was likely to face strong measures from some countries and isolation in retaliation for the coup.

The U.N. Security Council is due to discuss the situation on Friday in a closed meeting, diplomats said.

U.N. Special Rapporteur Tom Andrews said the “systematic brutality” of the military was again on display.

“I urge members of the U.N. Security Council to view the photos/videos of the shocking violence,” he said on Twitter.

U.S. State Department spokesman Ned Price said the United States was “appalled” by the violence and was evaluating how to respond.

The United States has told China it expects it to play a constructive role, he said. China has declined to condemn the coup, with Chinese state media calling it a “major cabinet reshuffle”.

The European Union said the shootings of unarmed civilians and medical workers were clear breaches of international law. It also said the military was stepping up repression of the media, with a growing number of journalists arrested.

‘EVERYTHING WILL BE OK’

In Yangon, witnesses said at least eight people were killed on Wednesday, while media reported six were killed in the central town of Monywa.

Save the Children said four children were killed including a 14-year-old boy who Radio Free Asia reported was shot dead by a soldier on a passing convoy of military trucks. The soldiers loaded his body onto a truck and left, according to the report.

Images of a 19-year-old woman, one of two shot dead in Mandalay, showed her wearing a T-shirt that read “Everything will be OK”.

Police in Yangon ordered three medics out of an ambulance and beat them with gun butts and batons, video broadcast by U.S.-funded Radio Free Asia showed. Reuters was unable to verify the video independently.

The military justified the coup by saying its complaints of voter fraud in the Nov. 8 vote were ignored. Suu Kyi’s party won by a landslide, earning a second term.

The election commission said the vote was fair.

Suu Kyi, 75, has been held incommunicado since the coup but appeared at a court hearing via video conferencing this week and looked in good health, a lawyer said.

Hottest cars that are cool for the environment (and one other)