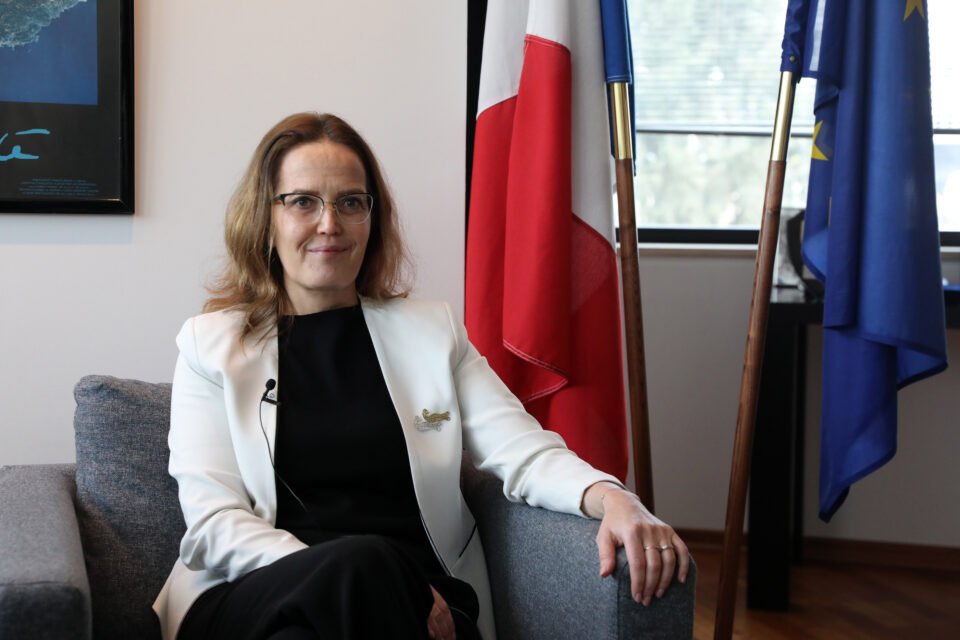 A two-state solution in Cyprus is not a real solution, the new French Ambassador in Cyprus, Salina Grenet-Catalano, has told the Cyprus News Agency (CNA), noting that Paris is very much attached to the UN resolutions providing for a bizonal, bicommunal federation, with political equality.

Grenet-Catalano described ideas about a decentralised federation as very interesting, stressing that “we would like to have a reunited Cyprus within the European Union, and we think that the federation is probably the best way, if not the only way, to do so.” Moreover, she encouraged the parties to show flexibility in order to allow the resumption of negotiations.

Asked how Paris sees prospects for the informal 5+1 meeting on Cyprus that will take place at the end of April, in Geneva, and how France can help efforts for a Cyprus settlement, as a UN Security Council permanent member and an EU member state, Grenet-Catalano said that as a friend of the Cypriot people, on both sides of the divide, as a UN permanent Security Council member and as a European country, “France has always been looking forward to a fair and lasting settlement of the Cyprus issue.”

“We are willing to help and that is what President Macron reaffirmed to President Anastasiades recently, during a phone call. We are willing to help, but it will be easier for us to help if there is a real negotiating process going on. So that is why we hope that soon the informal meeting which will take place in Geneva, at the end of April, will lead to the resumption of the negotiating process,” she added.

She went on to say that “we encourage the parties to show flexibility, in order to allow the resumption of negotiations. On the substance, we are very much attached to the principles set by the UN resolutions that is to say to the principle of a bizonal, bicommunal federation, with political equality.”

The French Ambassador stressed that “we need to find a lasting solution. And a lasting solution cannot be partition. Partition is not an option. So, we would like to have a reunited Cyprus within the European Union, and on the substance, we think that the federation is probably the best way, if not the only way, to do so.”

Grenet-Catalano said that “we have heard of ideas about a decentralised federation, a loose federation. Those ideas are very much interesting. We consider also that political equality is a guarantee of utmost importance in this issue. It is not up to us of course to say which form this efficient state based on those principles could take. We are talking about a Cypriot owned process, it is therefore up to the negotiators, it is up to the Cypriot people in the end to say what they want, but we consider that if we work on this basis maybe we could reach a fair and lasting solution.”

Asked about the EU’s involvement in the Cyprus problem, Grenet-Catalano recalled that “at the last European Council, the European Union members decided that they would appoint a representative to the UN Good Offices Mission as long as the negotiating process would have started again.”

Invited to comment on the position of Turkish side and Turkish Cypriot leadership about a two-state solution, the French Ambassador said that “we stick to the UN principles. That means the bizonal, bicommunal federation with political equality. The two-state solution is not a real solution because partition is not a solution for us. It could not be a lasting solution to the Cyprus problem. We really want a reunited Cyprus within the EU,” she added.

Grenet-Catalano stressed that “we don’t want a solution, a formula that could haunt the EU for a long period of time. Reunification is the only way out.”

Asked about activities that Turkey illegally carried out on several occasions in Cyprus’ Exclusive Economic Zone (EEZ) and Turkish moves as regards the fenced off city of Varosha, Grenet-Catalano said “at the moment there is no Turkish vessel in the Cypriot EEZ. Maybe it is a tactical move, but I hope that this demonstrates a more constructive approach by Turkey as regards the respect of international law and respect of international principles,” she added.

Furthermore, she noted, “that the French position on Varosha is the position of the UN. The last resolution adopted in January repeated those principles, and so we stick to those principles. And of course, this resolution is very clear about the rights of the former inhabitants of Varosha. I know that the former inhabitants of Varosha are very much attached to the city. That is natural, that is normal,” she added.

Asked about the stance that the EU should hold vis-à-vis Turkey at the European Council meeting of March 25-26, Grenet-Catalano reiterated that “for the time being there is no longer any Turkish vessel in the EEZ and we hope that Turkey will confirm this new stance and new position which respects the international law.”

She went on to say that “France and the other EU members are watching very closely ahead of the next European Council meeting which will discuss the relationship between the EU and Turkey. I cannot say what the outcome of the European Council will be. A report by the High Representative Josep Borrell is due very soon and will be the basis for discussion,” she added.

Asked about the bilateral relations between Cyprus and France and how these can be further enhanced, Grenet-Catalano said that “our bilateral relationship is excellent.” She noted that she is looking forward to bringing this excellence a step further. “In the political sector maybe we could work more on the European issues, because France will be the President of the European Union Council at the beginning of next year,” she added.

Grenet-Catalano said that “we have high expectations, we have ambitious goals for this Presidency and we hope that Cyprus will stand by our side and will be active at our side on those issues.”

She said that in the defence sector, Cyprus and France have a really wonderful relationship. “We are very thankful to Cyprus for all the facilities we are provided within the ports and the airports for our vessels and aircrafts. Of course, there will be new training activities because Cyprus is a close partner, it’s a friend and we are used to exercise in order to improve the inter-operability between our forces. That means how our forces can better operate together. So, we continue with these exercises bilaterally, but also in other more enlarged formats,” she added.

She added that “in the economic field there is a potential to develop, to further our relationship as far as trade is concerned, but also to foster investments. And we count very much in the innovative sector such as the digital sector, but also renewable energy. France has considerable expertise in that field and Cyprus has a great potential in that field.”

Moreover, she stressed the importance of enhancing relations in the education sector and improve the Francophonie in Cyprus.

She said that she is very much in favour of more and more Cypriot students going to France to study, noting that “what is not very much known is that you can study in English in France also. We have more than 1500 programmes taught in English and tuition fees are affordable.”

The problem-solving skills of a hungry racoon