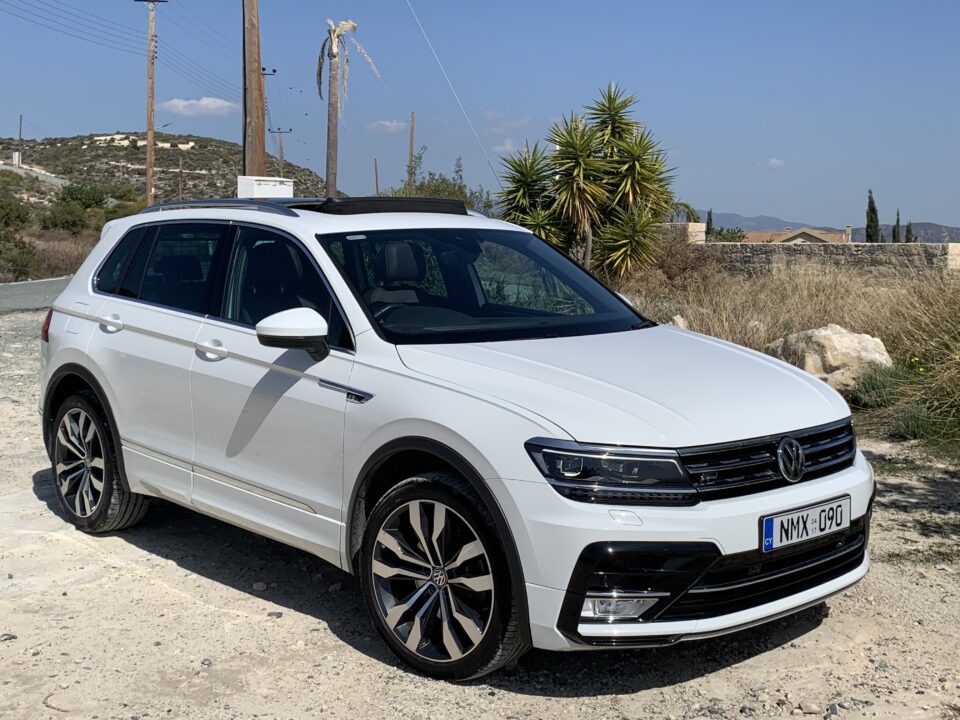 On paper, the Volkswagen Tiguan seems an appealing compilation of compromises. It’s an SUV, but a ‘midsize’ one, so it doesn’t bear the weight, proportions and operating costs of something like a Mercedes GLE. Likewise, it seems to sit somewhere in the middle of the midsize SUV market, costing more than the Skoda Kodiaq and Nissan Quashqai while offering savings over cars like the Audi Q5 and pricey Porsche Macan.

So, the Tiguan is a diesel powered, midmarket, midsize SUV. Doesn’t sound too exciting eh? Well, that’s until you actually take a look at it. The previous generation Tiguan looked like a car you bought instead of a BMW X3 to save some cash. This one looks like a car you’d buy because, well, it looks pretty darn cool! Admittedly, a good portion of its prowess must be attributed to the ‘R-line package’, which adds muscular looking bonnet ridges, sharp daytime running lights, 20” alloys and wider wheel arches. It’s an extra €3.300, but there is no denying that it completely transforms the appearance of the car, so I definitely think that it is a box worth ticking.

Inside, it’s much of what you’d expect from a Volkswagen: high quality, all very functional and well put together. There is an elegant touch of ambient lighting and the buttons on the steering wheel are chunky and solid to the touch – much better than the facelifted version’s haptic buttons, which I am told are terrible. The heated seats are a welcome luxury in the winter and storage space is stellar – you can fit multiple 1.5l water bottles in the door pockets, a feature that might sound unimportant but proves to be really useful in real life.

While the general feeling of the interior is not overtly premium, the overall impression is somewhat saved in this car by two swanky-looking screens. The central screen isn’t remarkable, but it benefits from an info-tainment system that is simple and intuitive. Rather more interestingly, in front of the driver there is space age screen instead of a regular analogue speedometer. The screen can display a map for the satnav as well as regular speedo dials, media information and much more. It’s pretty much the same screen and system you’d get on an Audi R8, and that’s the car Iron Man drives. Very cool. Still, it’s not quite as cosy as a Mercedes GLC in here, and you do get the sense that it’s a bit function over form. Hence, if luxury is your priority, I still think this car falls short of the same-size offerings from Mercedes and BMW. Then again, they’re pricier.

Engine-wise, this car is equipped with a twin-turbo 2 litre diesel offering that you can’t buy in Cyprus. It’s a UK import, and given the Brexit-born changes to VAT regulations for importing second-hand cars, there isn’t much point talking about it. In Cyprus, you can have any one of 2 engine choices, a 1.5 litre, 150hp petrol, and a 2 litre diesel with the same power. The petrol will be a little more refined, but given the Tiguan weighs 1.8 tonnes, I think you’d benefit more day-to-day from the extra torque offered by the diesel. The petrol starts at €28.500, with the diesel coming in at €2.000 more.

The 7-speed dual clutch gearbox is standard across the range, and is an absolute marvel at speed. I find it entertaining to watch how quickly the digital rev counter dives down each time the car upshifts – genuinely impressive engineering. Unfortunately, it’s not quite as useful at low speed. If you’re parking in a garage and allowing the car to idle in gear (move without throttle), it doesn’t seem to stick to the same speed, which can be quite frustrating. I suppose low speed shortcomings could be expected though, given this type of gearbox was originally pioneered by F1 cars.

All in all, it is not difficult to see why the Tiguan has sold so well. It exists as something of a compromise, and yet VW have managed to make it feel and look quite really desirable in and of itself. It’s also interesting, because I think this car showed me just how difficult reviewing any given model is these days. Ordering a car in the old days, you chose the colour you wanted and maybe the type of transmission. That was it. Nowadays, there are such a dizzying array of options available that you can easily add 30% to the price of most models, and in many cases you really are getting 30% more car too. From the way this car looks, handles, drives and feels – I am aware that almost everything I am impressed by is a pricey option. Hence, if you are already spending the extra money over a Kia Sportage or Nissan Quashqai, I think the Tiguan is worth optioning up. Optioned with 4WD, the adaptive cruise control and aforementioned screens, I really do think the Tiguan can hold its own at €36,000, and that is before you consider how slow this car is to depreciate. 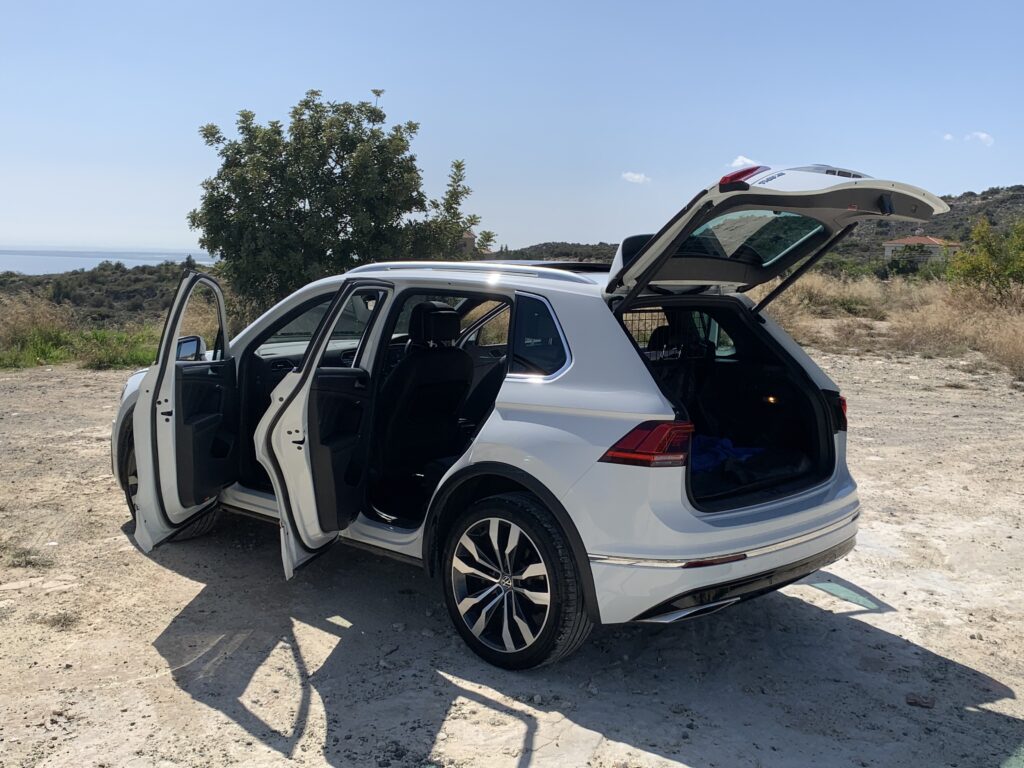