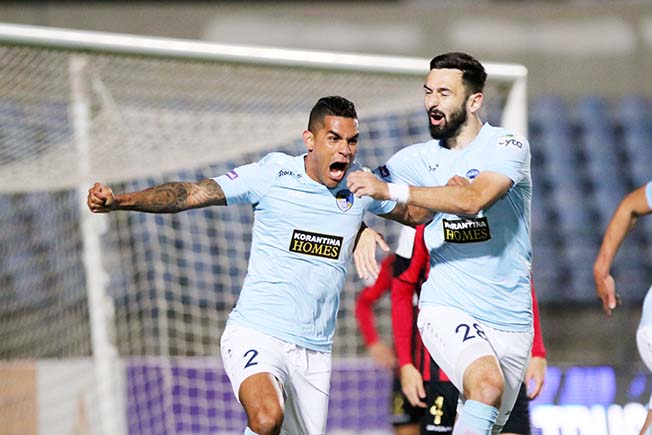 Identifying the most crucial games of any round becomes a somewhat moot activity once the Cyprus First Division enters the playoff phase as practically every game is of paramount importance to those involved.

On Saturday, title-chasing leaders Omonia face Anorthosis at home. Omonia not only need a win to stay first but will also want to take advantage of an AEL slip-up against bitter rivals Apollon to extend their one-point lead.

Speaking to Omonia’s in-house channel, manager Henning Berg said that it would be a difficult game.

“I think the two matches will be similar in terms of performances because there is always the rivalry and it’s a derby and if you play them in the play-offs or play them in the regular season they are still big games,” Berg said.

“We need to be close to our best level. Every time we play against Anorthosis they are close games so we have to be ready,” the Norwegian manager explained.

“Kousoulos is playing many matches now and he is an important player for the team and does a good job and needs to continue to work hard and focus on his game,” Berg added.

Anorthosis and their manager Temur Ketsbaia meanwhile have been fined and reproached by the Cyprus Football Association for incidents related to their game against Doxa.

Assistant coach Soso Tchedia was deemed guilty of not using the appropriate identifying sign during the game and also for not including two home-grown players in their matchday squad, the latter being a rather common occurrence in Cyprus.

Ketsbaia has been reproached for his ‘unsporting behaviour’ during the game, particularly an outburst during the 67th minute.

Pafos president Roman Dubov recently gave a long interview to local outlet Kerkida, touching on a number of issues related to the club. Interestingly, Dubov highlighted the need for club chairmen to give at least one or two interviews a year with the rest of the club news being provided by their press officers.

“Our evaluation of the season is mixed but mostly negative. We are not too worried about missing out on the top six because in football there is just one place, coming first. What we are more worried about is that we haven’t registered a lot of progress. Of course, we are certain that we are moving in the right direction but everyone here, every coach, player and staff member needs to do more and show their full potential.

“Obviously, we need to finish the season with confidence and show that we do not belong in the bottom half of the league and that we are ready for more. We need to cultivate a winning mentality,” said Dubov.

“It’s disappointing that Cyprus football has not taken a step forward. Cypriot clubs did not show a high level in European competitions and we saw mistakes at the executive level, we saw wrong calculations. Everything has stayed as it is, nothing has changed for the better,” the Pafos chairman explained, in yet another sign that Pafos’ objectives as a club are closely tied with the improvement of Cyprus football in general.

On the issue of refereeing, Dubov gave a very detailed answer, but in essence noted two things. Firstly, that Pafos’ performances are not a reflection of the refereeing and that they took full responsibility for where they are. Secondly, that Cypriot referees are indeed not up to the desired level.

“I will say it again. We lost on the pitch. You have to be able to accept defeat and we did it to ourselves. Bad tactics, low confidence, inadequate self-motivation, poor management, low discipline. These are the factors which have contributed to our position. Not the referees,” Dubov said to make his initial point.

“As far as the refereeing goes, I have expressed my opinion many times before. I personally believe that the level of Cypriot referees is holding back Cyprus football from progressing. Call it any way you want. Corruption, nepotism, lack of professionalism, not enough experience, poor training. Whatever you choose to attribute it to, it all leads to the same result. Scandals in every season. All of our attention goes to these scandals instead of football and what positive changes we can make,” he added.

Meanwhile, the president of the refereeing committee Milorad Mazic has held a meeting with all Cypriot referees in light of recent events.

Reports suggest that VAR has imposed a major restriction on Mazic in terms of appointing referees.

The small pool of available referees stemming from the increased requirements in terms of personnel due to the use of additional officials employed for the purposes of VAR, results in Mazic being unable to punish poor refereeing performances because he needs practically every official he has at his disposal.

Mazic is reported to be exploring the promotion of more referees from the second division so that he can have the ability to punish referees through their non-involvement in any games after a poor performance.