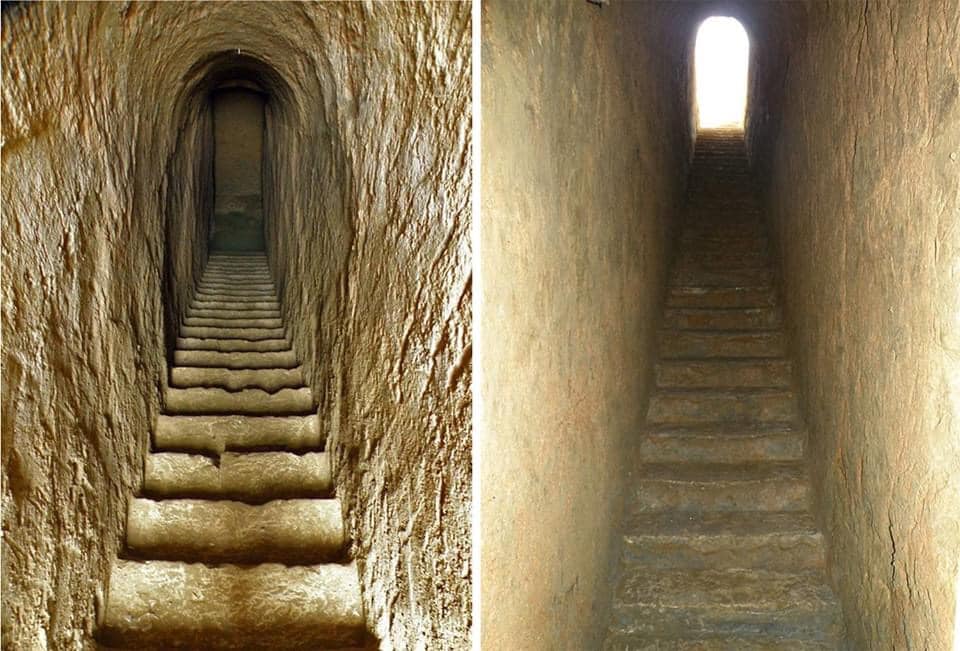 Some of the steps that have been uncovered

A series of steps that currently lead to nowhere have excited the imagination of people living nearby although treasure of legend has not been found there. But what has been uncovered is an ancient water management system

In the summer of 1949 a farmer was watering his artichoke plants on the outskirts of Tseri when he noticed that something odd happening. As he was watering, the water kept disappearing into the ground, sucked up by the earth.

An old legend spoke of a treasure so great it would allow all Cypriots to live without working for seven years hidden somewhere in the centre of Cyprus by King Ptolemy at the end of his reign in 58BC.

The farmer started digging to see where the water was going and discovered some steps. The fabled treasure was imagined to be in several areas of the island and claimed by many, but Tseri, located right in the middle, was a good match.

The tradition of telling this story was kept alive for many years and the legend was popular in the village. The farmer kept digging, certain that the steps would lead him to Ptolemy’s golden chariot.

He soon recruited more people from the village to help with his project, but as Cyprus was a British colony at the time they had to be sworn to secrecy to keep the English, or anyone else for that matter, from finding out what was going on and claiming the treasure – if there was any to be found.

The illegal dig drew more people, working day and night in the hope of unearthing a great discovery at the bottom of the steps. Someone was enlisted to ring the church bell to warn those in the fields digging if they saw someone coming.

The first two months of the operation unearthed 18 steps covered by an arched roof. As they continued, the process became much harder because the earth was muddy and they started finding water. One day, the bell rang; someone had betrayed them and the English were coming. They made a run for it.

Eventually archaeologists from the Cyprus Museum, led by director Porphyrios Dikaios, arrived at the site to assess the find and decided to continue the dig. They ended up finding a total of 40 steps which led to a spring, but no treasure.

With the passing of time, the structure filled up with soil and again fell out of sight and mind, but it was not forgotten by all locals. Mary Makri Chamberlain, a Tseri native, grew up with the above story, which she shared with the Sunday Mail.

She is passionate about the history of the area and started a Facebook group called Tseri of a different era, where members share photos, historical facts and anecdotes related to the village.

But it was not until 2006 that the Department of Antiquities relocated the structure, recording it as a Roman cistern. After the land was expropriated in 2008, the structure was listed as a Monument of the A Schedule, a title given to monuments located on state-owned land.

It is located in Agkali, an area about two kilometres away from the modern village of Tseri and close to the Almyros river. In 2003, plans to build a bypass in the southern perimeter of Nicosia threatened not only the cistern site, but another site consisting of a 20th century irrigation project. Made up of an underground tunnel spanning one kilometre and 65 wells at intervals leading down to it so people could bring up water, it incorporates a stone dam to supply water from the Alikos river north of the village to nearby fields for watering.

The Tseri community council strongly opposed the plans as building a road would have destroyed both sites, and the plan was eventually called off amid other objections from the communities of Latsia and Deftera.

Archaeological officer at the Department of Antiquities Efthymia Alphas, the dig’s director, told the Sunday Mail that it is difficult to determine when the structure is dated to as investigations in the area are still ongoing. Research and excavations on the site have been active since 2006.

The department of antiquities’ initial excavations aimed to remove the soil that filled the structure to determine what it was used for, how it was designed, and when it was built. Investigations revealed the 40 limestone steps going underground, covered by an arched roof. The walls’ interior surfaces, the roof and parts of the steps were covered with hydraulic cement, a water-resistant mortar which, according to Alphas, reveals the structure’s use as a cistern.

Even though it is possible that the previous excavations in 1949 have made archaeologists’ jobs more difficult, Alphas said, they were able to form an estimate on when the cistern could have been built based on some pottery found in the excavated material.

The pottery, “two terracotta heads (of a horse and a man) belonging to Archaic figurines,” according to a 2010 report, dated from the Archaic period to the Early Christian period (7th c. BC – 7th c. AD). It also matched pottery collected from plots in the surrounding area that belongs to the same time.

The dig has reached about nine metres from the surface but the structure is thought to extend even further, Alphas said. When the structure is completely excavated, revealing the rest of the steps and the underground space to which they lead, the department of antiquities will be able analyse the findings to better determine its dating.

The structure is believed to be associated with the exploitation and management of water, perhaps linked to an underground aquifer. Further investigation is needed to determine whether it is connected to other similar structures and whether it is directly connected to a natural aquifer.

“Various other finds in the area, like a cemetery, have pointed towards the previous existence of an ancient settlement at this location,” Alphas said.

Asked if the department of antiquities has found any similar structures, she responded that the specific one seems to have played an important role in the area. “It has a monumental nature, and has obviously been built painstakingly, with attention and care,” she said.

Tseri is located in the Mesaoria plain and experiences extremely dry weather conditions, which is why the excavations have been deemed important into providing insight on the history of water management in Cyprus. According to the department of antiquities, “the inhabitants of these areas had to often deal with the unpleasant consequences of drought and applied various methods of locating, storing and transferring precious water to cover their drinking and irrigation needs and to improve their living conditions in general”.

Alphas said that when the dig is completed and the appropriate health and safety evaluations have taken place, the department of antiquities will consider the possibility of opening the site to the public.

Until then, it will continue to live on in legend and in the memories of the people of Tseri.

Perugia: the medieval and cosmopolitan heart of Umbria