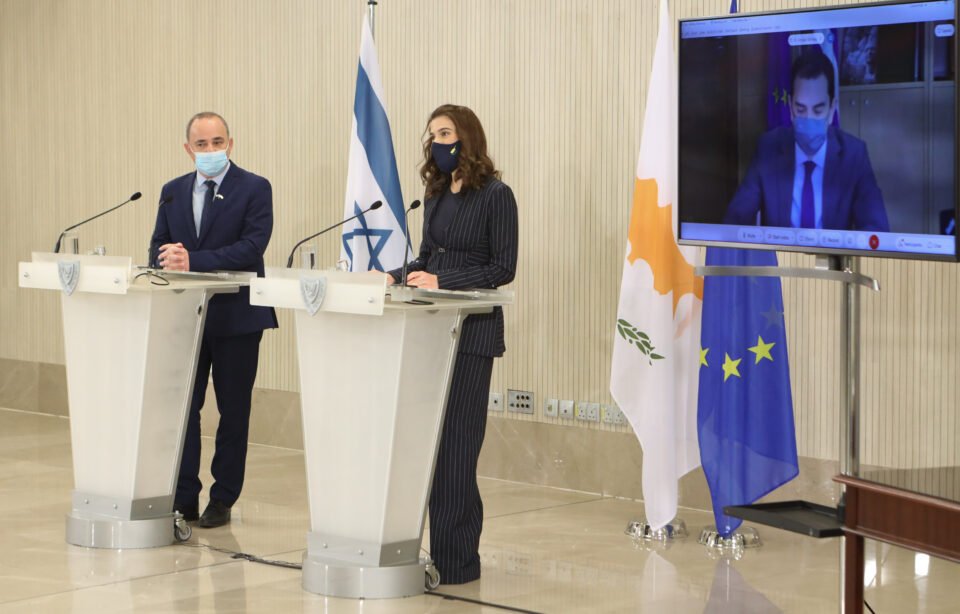 Cyprus, Israel and Greece on Monday signed a memorandum of understanding (MoU) on cooperation in relation to the EuroAsia Interconnector, taking another step towards the implementation of an ambitious project to link the electricity grids of the three countries.

The EuroAsia Interconnector, which aims at ending the energy isolation of Cyprus, is a leading European Project of Common Interest (PCI), an EU “electricity highway” connecting the national electricity grids of Israel, Cyprus and Greece through a 1,208km subsea HVDC cable.

The MoU was signed at the presidential palace in Nicosia by the energy ministers of Cyprus and Israel Natasa Pilides and Yuval Steinitz, while their Greek counterpart Costas Skrekas signed it online in Athens.

In a joint statement, the three ministers hailed the Euroasia Interconnector as an extremely important step in achieving the necessary synergies that will facilitate the inclusion of more renewable sources of energy, enhancing the three states’ capability to fulfil commitments in line with the Paris Agreement on climate change.

“The three ministries, in recognisng the high level of trilateral cooperation in the field of energy between Cyprus, Israel and Greece, view the EuroAsia Interconnector, an EU Project of Common Interest, as a major step forward for providing the necessary synergies that will facilitate the integration of additional renewable energy sources in their respective electricity and primary energy supply mixes, thereby enhancing the ability of the three countries to meet their commitments under the Paris Agreement on Climate Change,” they said.

In this context, the ministers agreed to promote cooperation to examine the possibility of planning, as well as the potential development and implementation of the Project.

Such cooperation will involve facilitating the timely granting of necessary permits and approvals, discussions and coordination between electricity regulatory authorities and Electricity Transmission System Operators, the harmonisation of the three countries’ respective technical standards and examining ways and means of ensuring the safety, security, sustainability, resilience and reliability of the electricity interconnector cable.

To review and monitor the implementation of the MoU, periodic meetings will be held by the ministers or their representatives.

Addressing the signing, Pilides, spoke of another important milestone in the joint efforts of the three countries to promote regional cooperation in the field of energy.

The Project is a cornerstone of efforts to transition to a green economy and to fully align economic growth with environmental protection, she said.

And she added: “For Cyprus in particular, the EuroAsia Interconnector will constitute a decisive step towards ending the island’s energy isolation and, consequently, our dependence on heavy fuels.” This in turn will help efforts to make the economy more competitive.

The first phase of the 2.000 MW electricity highway is expected to be operational within 2025, connecting Cyprus with the energy grids of Asia and Europe and contributing to the completion of the European Internal Market, she added.