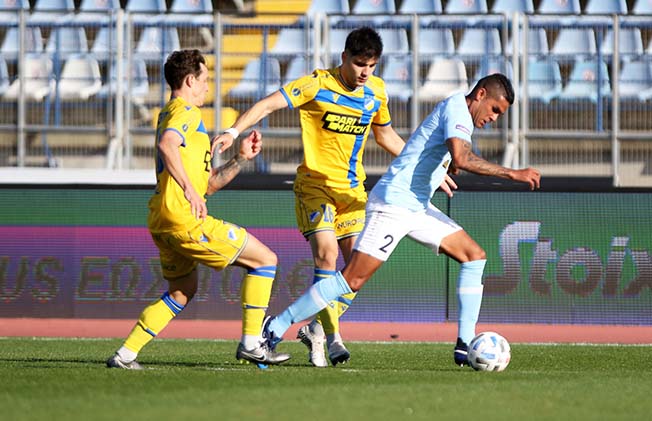 Seventh-placed Pafos top the relegation group with 36 points, two ahead of Apoel

The situation at the top of the Cyprus First Division’s relegation playoff group remained unchanged after the weekend, following the 1-1 draw between Pafos FC and Apoel Nicosia on Saturday.

Seventh-placed Pafos top the relegation group with 36 points, followed by Apoel in eighth place with 34 points and ninth-placed Salamina with 32 points.

Apoel took the lead with a swerving Tomas De Vincenti free-kick in the 51st minute, while Pafos found an equaliser in the 84th minute after some good work on the right channel to release Joao Aurelio, who squared it to Kevin Berigaud for a seemingly easy finish from nine yards.

Speaking after the game, Pafos manager Stephen Constantine said that the result was an accurate reflection of the two sides’ performances.

“We managed to take a point. I believe that the result is fair. We had some chances and gave it our all. We showed character,” Constantine said.

“When you are losing 1-0 against Apoel it’s a tough ask to come back but we did not stop trying. I am happy with my players’ attitude and I would like to wish Apoel good luck for the rest of the season,” he added.

The Pafos manager also explained his decision to bring on Va and Kevin Berigaud as substitutions rather than start them, with Constantine explaining that this was due to their fitness status ahead of the game.

The game was not bereft of any officiating-related controversy. Apoel had a goal ruled out by VAR in the 65th minute which resulted in a mix-up between the referee and the VAR officials.

As it has been reported, the referee initially told Ben Sahar that he chalked off the goal because he had committed a foul in the build-up, then he told the VAR officials that he had chalked it off because of a Sahar handball, and then the VAR officials said that the footage was inconclusive and that they could not find a reason to rule the goal out.

Sahar appeared to be use a high elbow to win the header which would assist Andreas Katsantonis if the goal stood, but I can see a case for the decision going either way.

The game was not a particularly interesting affair, with most attempts at goal falling under the speculative or low-probability category.

Still, Omonia managed to hit the post in the 49th minute after a free-kick from Thiago dos Santos was accidentally flicked on by Anorthossis player Branko Vrgoc towards his own goal, with the ball hitting the post and bouncing off Omonia’s Tomas Hubocan to go out of play.

At the other end, Anorthosis had to wait until the 92nd minute for their biggest chance of the game. Demetris Christofi delivered a medium-height cross from the right-hand side to find an unmarked Josef Husbauer whose first-time shot went straight to goalkeeper Fabiano.

Speaking after the game, Omonia manager Henning Berg denied that the Greens have any issues in regards to scoring goals, instead choosing to praise Omonia’s opponents for their resilience.

“I don’t think there’s a problem. We have had some good results. We wanted to score more goals but we are facing good teams who are trying to prevent us from scoring,” Berg said.

“I am satisfied with our quality and until today we scored enough goals and did not concede a lot so I believe we are doing well,” he added.

Women make up 66% of health workers in Cyprus