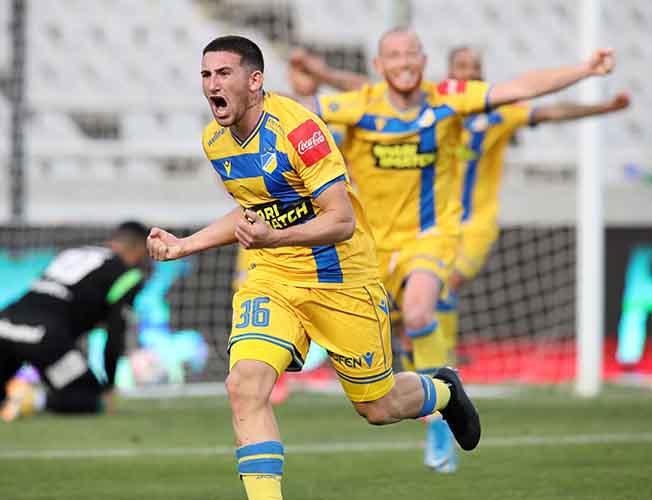 Apoel scored a dramatic late winner to beat Omonia 1-0 in the second leg of their Cyprus Cup quarter-final on Wednesday, sealing a 2-1 aggregate win.

After failing to make the top six in the league, Apoel’s last chance to qualify for a European competition for next season is through winning the Cup.

Omonia found a chance to open the score in the 24th minute when a free-kick from the left-hand side found Vitor Gomes inside Apoel’s penalty area but his first-time near-post flick went just wide.

From that point on, Apoel grew into the game, keeping more of the ball and winning second or third balls, registering a possession percentage between 60 and 70 per cent towards the latter stages of the half.

They nearly grabbed a precious away goal in the 26th minute. A corner taken by Ghayas Zahid was met by an Emilio Nsue header which was cleared off the line by Marinos Tzionis.

Omonia were feeling the pressure as Viktor Klonaridis then won the ball again and unleashed a strong shot from the edge of the area but goalkeeper Fabiano was well-placed to save it.

Apoel came close to a goal again in the 33rd minute when a De Vincenti corner floated right into the heart of Omonia’s penalty area where the ball was headed towards goal by Apoel defender Rafael Santos. While the header was good enough to beat Fabiano, the ball was yet again cleared off the line by Tzionis, who proved to be a key player for the Greens but not at the end of the pitch where we would usually expect him to make an impact.

Nsue had another chance to score with a header in the 43rd minute after a cross from Viktor Klonaridis. While Fabiano’s attempt to punch the ball away was unsuccessful and rendered the Brazilian goalkeeper out of position, Nsue couldn’t keep the ball low enough to send it into the net.

Omonia started the second half with more urgency and attacking intent, managing to fashion a high-quality opportunity for themselves in the first ten minutes. Shooting chances and dangerous situations were created, but nothing clear-cut.

Fifteen minutes from time, Omonia went so close to a breakthrough when Tzionis received the ball on the inside left channel before taking a clever shot from a narrow angle which hit the far post and was subsequently cleared.

Apoel tried to catch Omonia on the counter straight away, finding themselves in a three against two situation. However, when Dieumerci Ndongala had one final pass to make for Joe Garner to finish from close range, he delivered a low pass that was mistimed and tame, allowing an Omonia defender to block it and send it out for a corner.

Apoel finally broke the deadlock in the 80th minute through Argentine left-back Facundo Zabala. Zahid crossed from the right, the ball was flicked twice, once by an Apoel player and then by an Omonia player, finding its way towards the left-hand side of the box where a lurking Zabala unleashed a strong diagonal shot to send the ball past Fabiano and into the net.

With not much time remaining, Apoel held on to seal a memorable and morale-boosting win towards the end of what has been a difficult season.

Croatian short films to be screened at ARTos