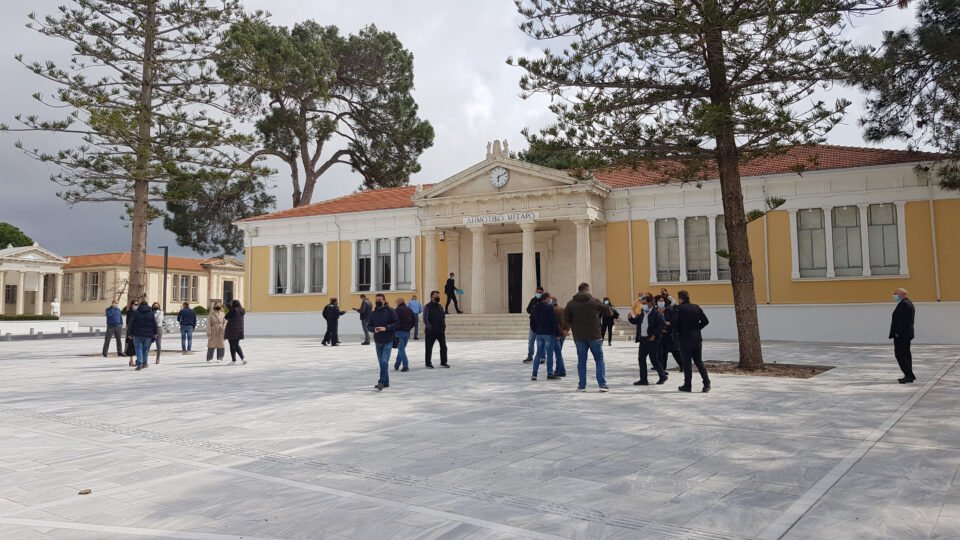 Staff outside the municipality on Thursday (Photo: CNA)

Staff at the Paphos municipality went on an impromptu work stoppage on Thursday accusing mayor Phedonas Phedonos of bullying.

The protest was prompted by an alleged verbal attack by Phedonos against one of their colleagues with employees citing the right to work with dignity.

Senior municipality official Anastasia Routi Eleftheriadou said Phedonos barged into her office shouting and accusing her of being unable to properly execute her duties. She said the incident took place on Tuesday. Phedonos had demanded she execute a task within two minutes despite the fact that this was not possible, she said.

She said she also filed a police complaint over the offensive and aggressive way the mayor barged into her office.

Eleftheriadou said that for years, staff have been subjected daily to insults, psychological violence, shouting and tension.

“We have our dignity,” she said.

Representatives of trade unions Sek, Sidikek-Peo and Deok joined the municipal staff and, in a statement, condemned such behaviour.

Phedonos however, denied the claims.

The mayor said the employee in question performed her duties poorly as she did not know how to operate a system through which details of court cases could be easily located.

He said that he had proposed to the senior official to receive training on the system but she had a dismissive attitude. In fact, he said, in order not to make her feel offended, he had told her the municipal secretary and he himself would learn how to use the system.

He said he had argued that it was inconceivable for a local authority aspiring to become a “smart-city municipality” to have senior officials unable to carry out a specific task.

Phedonos said that promotions were due to be discussed shortly and that this was an attempt by some to exert “pre-emptive politics.” He also criticised the unions of being used to co-run the municipality before he was elected and vowed to fight against this “establishment”.

Female experiences of belonging and identity