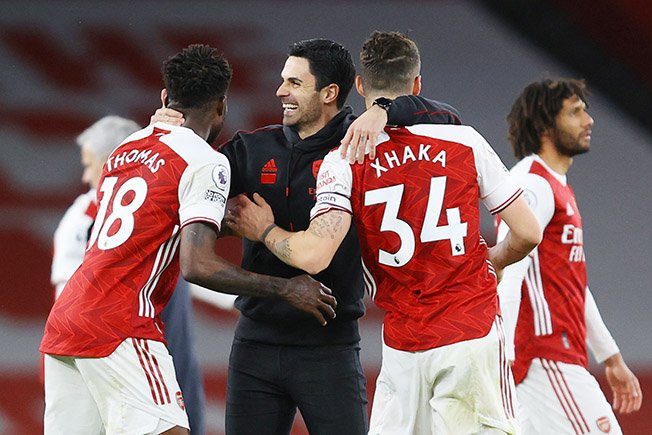 Arsenal came from behind to win the north London derby

Arsenal recovered from the shock of conceding a stunning Erik Lamela goal to claim a deserved 2-1 victory over Tottenham Hotspur in the Premier League’s north London derby on Sunday.

It was a mixed afternoon for Lamela who produced an audacious ‘Rabona’ shot to put Tottenham in front against the run of play after 33 minutes at The Emirates — one of the most remarkable goals ever seen in the long-running rivalry.

But the Argentine, who came on for the injured Son Heung-min early on, went from hero to zero when he was sent off in the 76th for catching Kieran Tierney with his flailing forearm.

While Lamela’s goal was unforgettable it could not disguise a largely disappointing display by Tottenham who squandered a great chance to boost their hopes of a top-four finish.

After Lamela’s sending off the visitors’ 10 men finally applied some pressure and they had a Harry Kane goal ruled out late on for offside before he hit the post with a free kick.

Tottenham are now without a league win at Arsenal since 2010 and the defeat left them in seventh spot on 45 points, six behind fourth-placed Chelsea with a game in hand. Arsenal stayed in 10th place with 41 points, four off Spurs.

“It was incredible. Going 1-0 down the way we were playing was disappointing and the worst-case scenario against a team like Spurs. But we kept playing and deserved the win,” said Arsenal manager Mikel Arteta.

Arsenal were far sharper than Tottenham in the early stages and were unlucky not to go ahead when Emile Smith-Rowe rattled the crossbar with a curling effort from distance.

Shortly afterwards South Korean Son went down holding his leg and was replaced by Lamela who was soon to make an impact.

Lucas Moura did well to take down Sergio Reguilon’s long pass and fed the ball to Lamela who, from the left edge of the penalty area, wrapped his left leg around his right standing leg to ping a low shot past the bamboozled Bernd Leno.

It was the second time in his Spurs career that Lamela had scored with the so-called ‘Rabona’, a difficult trick that originates from his native Argentina, having also scored with one in the Europa League in 2014.

Arsenal’s response was strong, however, and they were unlucky again when Cedric Soares hit the post with a piledriver.

The hosts got their reward though when Tierney’s cut back was met by Norwegian youngster Odegaard whose shot deflected off defender Toby Alderweireld before beating keeper Hugo Lloris.

Arsenal, who had left skipper Pierre-Emerick Aubameyang on the bench Leicester City manager Brendan Rodgers was full of praise for striker Kelechi Iheanacho, who scored his first Premier League hat-trick in the 5-0 hammering of bottom placed Sheffield United on Sunday.

“Kelechi Iheanacho is a great guy and when he has been asked to come in, he has performed. Absolutely delighted for him to have got a hat-trick in the Premier League. It’s a great achievement and all were very good team goals,” Leicester boss Rodgers told the BBC.

Vardy, who has struggled in front of goal lately, teed up two of Iheanacho’s strikes before seeing his shot turned into his own net by Ethan Ampadu to complete the rout.

“He allows the players to get up with him, he got in the right positions … he keeps going for the team. He maybe could have scored, we always appreciate everything he brings for the team,” Rodgers told Sky Sports.

Heckingbottom, who will be at the helm until the end of the season, was disappointed with his side’s performance.

“We know the circumstances behind it. It’s been a tough week in losing Chris (Wilder) … the players and the staff have lost their leader. It’s taken its toll, it’s an emotional dressing room,” he told the BBC.

“You can’t get rid of the feelings. The focus was solely on this game. But it’s more of an emotional thing, I think. You can see it and feel it and sense it, which is to be expected.

“It’s a sad time but we have to look forward. There is still a lot of football to play.” for “disciplinary reasons”, went ahead when Tottenha defender Davinson Sanchez made a clumsy tackle in the penalty area on Lacazette who had just scuffed an attempted volley.

Lacazette got up to beat Lloris from the spot.

Lamela was shown a second yellow card for catching Tierney but Spurs then produced their best spell with Kane’s header ruled out for offside and the England skipper thudding a free kick against the post with Sanchez’s follow-up cleared off the line by Gabriel.