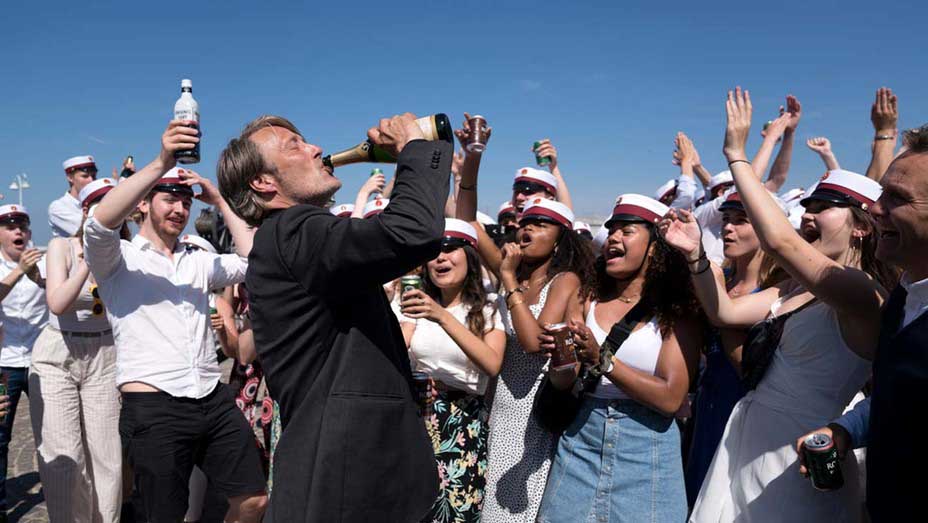 The film starts with a fun, juvenile activity. Carrying a case of beer bottles around a lake and having to drink them. Fun reduced to chore. The heavy case burdening its carriers. Young people cheer. A party ensues. Another Round, available on Amazon Prime Video, wastes no time in getting to the crux of the matter. Its original Danish title being an even blunter act of foreshadowing. Druk, binge drinking in English, and a few letters short of druknede, meaning drowned.

Cut to the next day. Teachers, students, a discussion around the curtailing of drinking. A physical education teacher watching his presumably hungover students run laps around an indoor court before getting down to the floor to do some pushups. You wonder if the middle-aged adults in attendance are envious of the young people’s ability to metabolise alcohol at that speed.

Music class follows, then psychology, and then history, which becomes our focus. Mads Mikkelsen’s history teacher, Martin, is all over the place, rambling about technology during a class on Winston Churchill, confusing historical events, meekly watching as a student has enough of this and walks out of his classroom. His students are dissatisfied with both his teaching approach as well as his harsh grading system. Parents are worried. He remains aloof but makes a weak attempt to reassure his students and their families that this will be dealt with.

We see Martin having dinner with his family, before enquiring whether he has become boring. His wife politely acknowledges that he has indeed changed since their original acquaintance. This appears to feed into his general passivity and absent-mindedness. A visit to a friend precedes a 40-year-old colleague’s birthday party and includes the sad sight of an old dog having to be carried outside so that it can sprinkle the grass with a faint amount of urine.

The party, if one can call it that, involves dinner at a restaurant, champagne, beer, but not for Martin who opts for water. Instead, he strains to pay attention to a discussion about a Norwegian philosopher who claims that humans are boring with an alcohol deficiency which they need to constantly replenish so that they can remain ‘musical, open and courageous’.

The discussion is ultimately aimed back at Martin, with alcohol being offered as a solution to his overly demure nature and how it negatively affects his teaching. A waiter offers caviar paired with vodka. The vodka, he says, is so special that it elevates the little water it will be mixed with. Alcohol presented as an enhancer. Martin is convinced to have some. Seconds later, the din of the restaurant’s patrons and their chatter seamlessly subsides and singing come to the sonic foreground.

The vodka is at first sipped, then knocked back, and chased by swiftly-swallowed glasses of red wine. Friends become concerned and enquiries are met with a much looser tongue than earlier. Martin is isolated, lonely, feels distanced from his night shift-working wife. Friends talk of his potential as a young researcher. We assume that it has been wasted. The drinking continues and shenanigans between middle-aged manchildren unfold. The essence is that Martin has discovered a magic elixir to his innate aversion to being outgoing, confident and assertive.

The daily sipping becomes a collective endeavour, as Martin and his friends decide to do it as a group to test the Norwegian philosopher’s assertion. An academic paper will be produced because of this activity which means that there’s legitimate merit in doing it. We learn that marital issues aren’t confined to Martin’s household.

A montage of politicians and global leaders either drinking or presumably drunk in public propels us forward. Angela Merkel, Nicolas Sarkozy, Boris Yeltsin, Bill Clinton, Jean-Claude Juncker. We see Martin waking up. The base alcohol level restriction initially agreed has been raised. His car has been permanently put to the side and replaced with car-sharing rides to work. His companions are buoyed by his increased popularity in the classroom and push the limit past ‘the point of ignition’, as they call it, seeking a sort of purification through complete stupefaction. Embarrassment, degradation, wretchedness and despair follow, yet weirdly, unexpectedly, perversely, their objective is achieved.

In a third act scene, a young student references Soren Kierkegaard’s ‘The Concept of Anxiety’ during an oral exam, yet it is a different quote from the Danish philosopher that applies here. “Love is a change, the most remarkable of all, but the most desirable; in fact, we say in a very good sense that someone who is gripped by love is changed or becomes changed.”

Animal crime on the island brought into focus