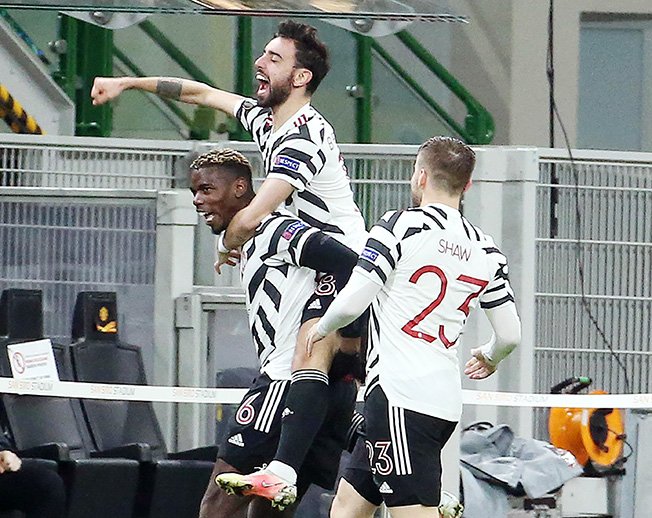 Manchester United will meet Spanish side Granada in the quarter-finals of the Europa League, with Arsenal up against the side who knocked Scottish champions Rangers out in the last 16, Slavia Prague, in their last eight clash.

Should United get past the Europa League debutants, they could be handed a reunion with the team they beat in the 2017 final – Ajax Amsterdam – in the last four.

But the Dutch champions first must negotiate their way past the only Italian left in the competition – AS Roma – in their last eight tie.

There could be a reunion on the cards for Arsenal, should they progress to the last four, as they could take on the winner of the quarter-final between former Gunners coach Unai Emery’s Villarreal and Tottenham Hotspur conquerors Dinamo Zagreb.

United, whose last trophy success was their 2017 Europa League win, when coached by Jose Mourinho, disposed of AC Milan in the last 16 thanks to a Paul Pogba winner in the San Siro.

Manager Ole Gunnar Solskjaer has said it is league position that gives a true indication of progress, with United second in the Premier League standings. However, a large portion of fans will want to see silverware return to Old Trafford.

Under Emery’s tutelage, Arsenal finished outside the top four in 2018-19, with the Spanish coach sacked in November 2019 having overseen a poor start to the following campaign.

Overcoming Dinamo Zagreb could therefore bring an additional bonus for Emery and the chance to enact revenge on Arsenal.

But Dinamo will be no pushovers, as Tottenham found out to their peril as they let a two-goal first-leg advantage slip in Zagreb on Thursday, losing the return clash 3-0 after extra time to spark wild celebrations in the Croatian capital.

First legs to be played on April 8 and second legs on April 15.

First legs to be played on April 29 and second legs on May 6.

The final will be held in Gdansk on May 26.

EU to back vaccine export checks when leaders meet next week

2021: a window of opportunity for the future of Greece