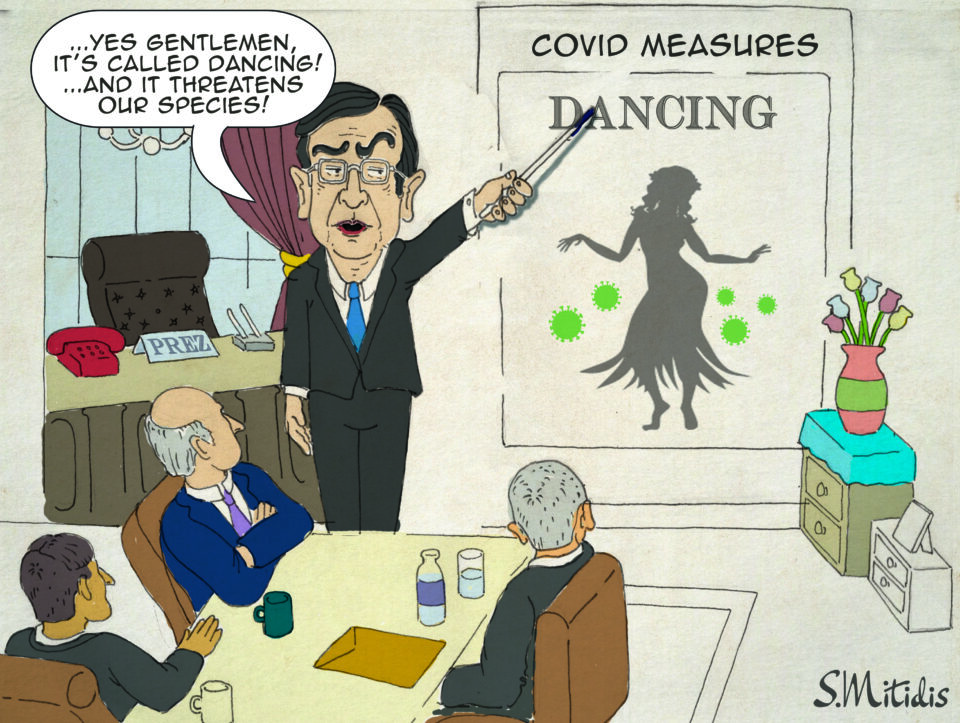 IF THERE was anyone who thought that Prez Nik’s impassioned declarations of support for the bizonal, bicommunal federation, even without political equality, and for the resumption of talks at the point he walked out at Crans Montana, were sincere – a genuine abandonment of the two-state solution he prefers – they should take a reality pill.

His newly-found commitment to BBF, which he would have secured at Crans-Montana together with the withdrawal of the occupation troop and the abolition of the guarantees if he wasn’t in such a hurry to leave and concentrate on his re-election campaign, is political theatre that he is a master practitioner of. If there was Nobel prize for it, we would have a Nobel-laureate Prez.

The reality is that he feels safe being fanatical about BBF now, because the Turks are refusing to discuss it and insist they would discuss nothing apart from the two-state solution and what they call sovereignty equality. This is a new Cyprob term to add to the residue of power, the implementation mechanism, informal conference, non-paper and my all-time favourite – the virgin birth.

He therefore has absolutely nothing to lose by banging on about BBF, which is kind of ironic when you consider that he was zealously advocating the two-state solution to friends and associates since 2017 and proposed it to the Turks as well. If he remained true to his beliefs, the five-party conference would be a guaranteed success.

NOT THAT he is taking any chances by supporting BBF. He has taken precautions against the outside chance (bookmakers are giving 1000 to 1) of the Turks going to Geneva and calling his bluff.

He has recruited the top peace-plan demolition man, retired ambassador Tasos Tzionis, who was the protégé of the late Ethnarch Tassos, under whose guidance he became a world expert in leading negotiations to deadlock or collapse. During the Tassos golden era for the Cyprob, Tzionis had more than 100 meetings with Perdev (sorry can’t remember his first name), Mehmet Ali Talat’s representative and they agreed nothing.

With such a specialist in progress prevention on his negotiating team, Nik has ensured that even if the Turks call his BBF bluff it will come to nothing. Tzionis, with his diplomatic wrecking ball, would be able to provide him with dozens of legalistic objections and pretexts for leading the talks to failure because of Turkish intransigence and the risk of the Republic being downgraded.

Phil, many of whose hacks revere Tzionis as the great brain of the Cyprob, carried an interview with the man last Sunday which was a dazzling demonstration of his uncompromising negativity. His concern, given great prominence by the paper, was that the Cyprus Republic had not been invited to the five-party conference, for legal reasons too boring to repeat.

AMBASSADOR Tzionis’ Cyprob philosophy has been imposed on the foreign ministry, which he inherited from his late father-in-law, Andreas Mavrommatis, two of whose children are also ambassadors. He also tried to make his Siamese cat an ambassador, but she failed the interview.

Our current foreign minister Nikos Christodoulides and his wife Philippa Karsera are also disciples of Tzionis who had helped them early in their career and instilled in them his anti-settlement poison as he had done to many other foreign ministry recruits. Philippa was by far the better disciple, Nikos often betraying his hard-line philosophy for the sake of his career advancement.

It goes without saying that Nikos is now, like his boss, a fully committed supporter of BBF, secure in the knowledge that if the Turks pull a fast one in Geneva, his mentor Tzionis, like the Batman of diplomacy, will come to the rescue of all those that do not want the Republic’s ambassadorial postings to be share with the Turkish Cypriots.

GOOD NEWS for halloumi came from Brussels last week. The European Commission after seven years of objections by our government has finally set a date to vote on the PDO (Protected Designation of Origin) of the national cheese that has acquired world-wide fame and is being produced clandestinely by many other countries.

Of course the approval of the PDO will create other problems with several producers determined to challenge it legally on the grounds that the specifications drafted by the agriculture ministry cannot be satisfied by anyone including Cypriot halloumi makers. That, however, is another matter.

This being a serious establishment we are more interested in political ramifications of the halloumi PDO, which will lead to a downgrading of the Cyprus Republic as it will not be allowed to certify the hellim produced by Turkish Cypriots.

IN SUMMER 2015, the then President of the European Commission Jean Claude Juncker came to Kyproulla and brokered a deal between Nik and Mustafa for the registration of the cheese you can fry, as a PDO. This deal was strongly opposed by the Tzionis disciples at the foreign ministry, headed by Mrs Karsera, and our government has been raising objection against the registration for the last seven years.

The government had obviously lifted all its objections for the registration to proceed now. The funny things is that nothing has changed in the Juncker deal of 2015 – an independent company from abroad, not the Republic’s services, will certify the hellim’s specs and another independent company will carry out phytosanitary inspections in the north.

Why has it taken so long for our government to lift its objections to a deal agreed by Nik seven years ago? Is it no longer afraid that our halloumi sovereignty will be downgraded? I suspect Nik called off the halloumi hounds, because he wanted to advertise his goodwill to the dumb Europeans before the five-party conference.

THE EUROPEANS have not been very nice to us recently. The sanctions against executives of the Turkish petroleum company TPAO that they have been putting off from one European Council to the next have now been frozen indefinitely, because Turkey managed not to violate our EEZ for two months in succession.

This was a slap in the face for our government, but especially our foreign minister who had been going on about the sanctions that would be imposed on Turkey all last year. He has found a new cause to counter this failure of his multi-faceted, multi-dimensional, multi-layered, multi-flavoured foreign policy.

He has turned the presence of the EU at the five-party conference into a national cause. It helps that the poor man’s Denktator in the north, Ersin Tatar has been insisting he does not want the EU at the conference because it would be biased. The uppity Paphite, for once, is banging on from a position of strength. He even wrote a fiery article for Euractiv website, passionately arguing that the EU must be present at the conference.

He already knows that an EU representative will be in Geneva – Mevlut Cavusoglu had said Turkey did not object to EU presence several weeks ago – but there is no doubt this will be presented as a big triumph of the government and of the tenacious foreign minister in particular.

THE MIGHTY Odysseas finally released his eagerly-awaited report about the PEP (politically exposed persons) loans from the Co-op Bank that ended up with Kedipes, the company that was given all the bad loans. Odysseas identified PEP cases involving €4.2 million in write-offs as part of restructuring arrangements. He did not give any names, leading many to speculate that there must have been Diko PEPs involved. Dikheads are never exposed by Odysseas because he was one himself, before he decided to become the saviour of Kyproulla.

STAYING on party issues, did you know that Edek, in a pioneering move, has set up a scientific section specialising in Covid vaccines? This fledgling scientific section, made up of socialist scientists, on Thursday issued its medical advice to people that had qualms about vaccination.

“We want to repeat that Edek, from the first moment, identified the dangers looming for public health from vaccines of the AstraZeneca type, but unfortunately our concerns were not taken into account.” Had Edek written to the European Medicines Agency (EMA) to inform it about these dangers in order to save lives? Obviously not, because on the same day the EMA said the AstraZeneca vaccine was “safe and effective.”

Our View: Rational thought has been another casualty of the pandemic