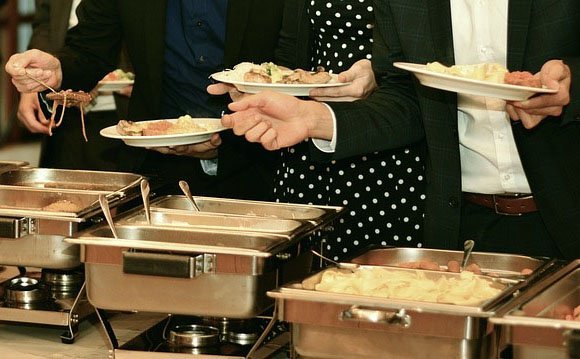 70 per cent of the fish people put on their plates is not eaten. Even 37 per cent of meat is wasted

Absurd amounts of food people pile on their plates at buffets in restaurants end up in rubbish bins, newly published research by the Cyprus Employers and Industrialists Federation (OEV) shows.

The researchers asked restauranteurs about the percentage of food left on the plates when they collect them from their customers after a meal is over.

“People who heap a large amount of food on their plates from buffets usually don’t eat it all and it ends up as waste,” head of the energy and environment department at OEV Anthi Charalambous explained.

People eat most of the meat they get, but still leave 37 per cent of it, 33 per cent of dairy products which are part of a dish are not eaten, and 25 per cent of nuts are not consumed, the study noted.

The research also addressed the utilisation of organic waste and composting, and results show most companies understand the concepts.

“When they were asked which food is biodegradable and what is organic waste, most knew what it meant,” Charalambous commented. “The only thing which about 75 per cent got wrong is they believe cooking oil can be composted.”

The companies which participated in the research believe that food waste can be reduced, by storing items properly and by ordering the right quantities.

The study was conducted as part of a wider research under the Life – FOODPrint programme which aims to reduce food waste and aims to bridge the gap between the awareness and behaviour of stakeholders.

The research was carried out between December 2020 and January 2021 via an online questionnaire addressed to catering establishments.

It is a campaign funded by the EU Life programme and coincides with the implementation of the Cyprus strategy to achieve the broader environmental goals for sustainable management and a drastic reduction of municipal waste by 2030.