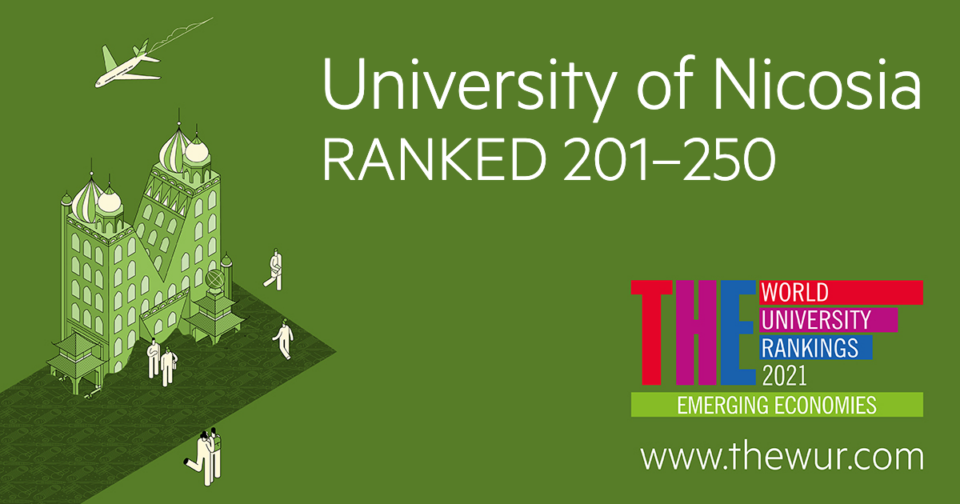 The 2021 results of the Times Higher Education (THE) Emerging Economies Rankings have ranked the University of Nicosia (UNic) among the Top 201-250 universities in the countries or regions classified by the London Stock Exchange’s FTSE Group as “advanced emerging”, “secondary emerging”, or “frontier”.

The Emerging Economies rankings use the same (though slightly recalibrated) performance indicators as the flagship THE World University Rankings (WUR), possibly the best-known university rankings in the world, to judge institutions on their teaching, research, knowledge transfer, and international outlook. A record 606 research-intensive universities ranked this year, from across 48 countries, demonstrating the growing strength of the region in the higher education field.

The University of Nicosia now joins the University of Cyprus and the Cyprus University of Technology in this particular ranking, in what is yet another testament to the tremendous development of the university sector in Cyprus, which boasts three of the top 1000 universities in the world, according to Times Higher Education.

Along with its inclusion in the Top 1000 THE WUR table, UNic has also been recognised by the QS World University Rankings (number 126 in emerging Europe and Central Asia region) and by the THE Impact Rankings (number 42 in the world in the core area of quality education). UNic was also notably awarded a 5-Star institutional rating as part of the 2020 QS Stars University Ratings System audit, joining an exclusive group of only 50 other universities globally.

Overall, universities from emerging economies are improving at a much faster rate than those around the rest of the world who are ranked in the THE World University Rankings. UNic is a prime example of this dynamic growth, having developed into the largest university in Southern Europe that teaches primarily in English, serving over 14,000 students from across the globe.

Moreover, internationalisation is a cornerstone of the university’s strategy, resulting in notable initiatives such as the establishment of the first and largest medical school in Cyprus, in partnership with St George’s, University of London, as well as offering globally unique programmes of study in collaboration with other reputable universities. The university is also regularly recognised as a global leader in Blockchain education, being the first university in the world to offer a course and Master programme in the field, among other global university firsts.

Microsoft in talks to acquire Discord for more than $10 billion