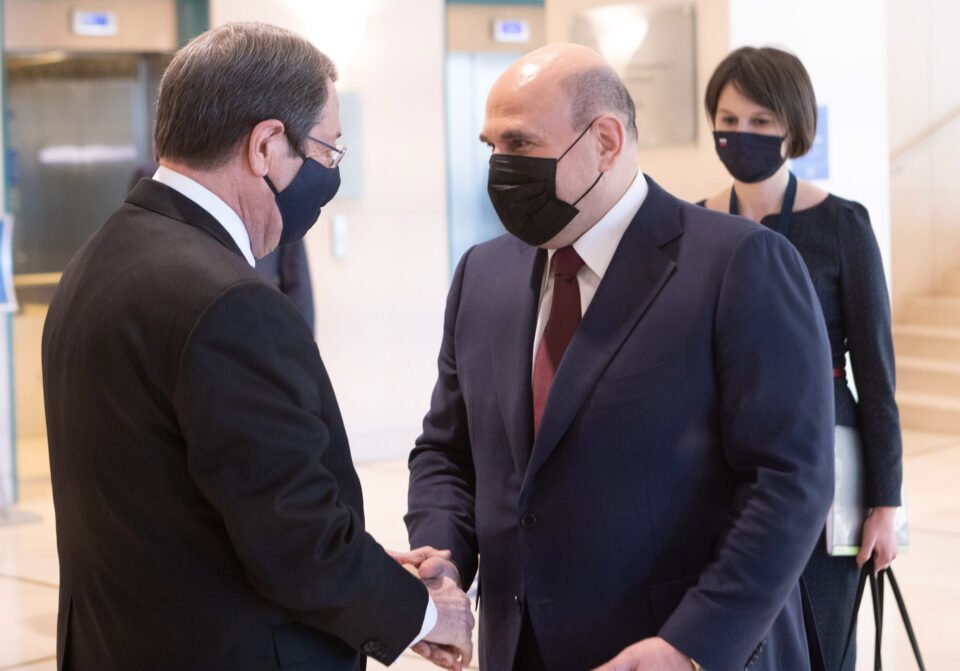 Anastasiades referred to the importance of Russia’s contribution to the efforts for a viable and functional solution to the Cyprus problem.

Both Anastasiades and Mishustin are currently in Athens to participate in the celebrations marking 200 years since the beginning of the Greek revolution against Turkey that led to the liberation of the country and the establishment of the Greek state.

During the meeting, Anastasiades thanked the Russian government for its positions of principle on the Cyprus issue in support of a solution based on the UN Resolutions and aiming at preventing the two-state solution the Turkish side is pursuing.

He said that Russia’s excellent relations with Turkey could play a productive role in the efforts for a viable solution to the Cyprus issue. “We are looking forward to that during the forthcoming informal five-party conference to be held in Geneva on 27-29 April in order for Turkey to understand that the best solution for the Turkish Cypriots as well, must be based on the UN Resolutions providing for evolving the Republic of Cyprus into a bizonal bicommunal federation,” Anastasiades said.

Anastasiades expressed the Greek-Cypriot sides determination to attend the five-party conference in a constructive way, by showing sincere political will “to create the necessary conditions for the resumption of negotiations from the point where they stopped at Crans-Montana”.

He also expressed the wish that Turkey would show a productive stance during the conference, by “avoiding positions that are distanced from UN parameters and abstaining from provocations concerning both the status of Varosha and Cyprus’ Exclusive Economic Zone”.

The Russian Prime Minister expressed Moscow’s full support to the efforts for the resumption of the negotiation process, stressing that the solution must be in line with the UN Security Council’s resolutions and the decisions taken by the UN General Assembly. He also agreed that actions that negatively affect these efforts should be avoided, both at sea and especially concerning the status of Varosha.

The two men also discussed bilateral issues, expressing their will to further deepen cooperation at all levels.