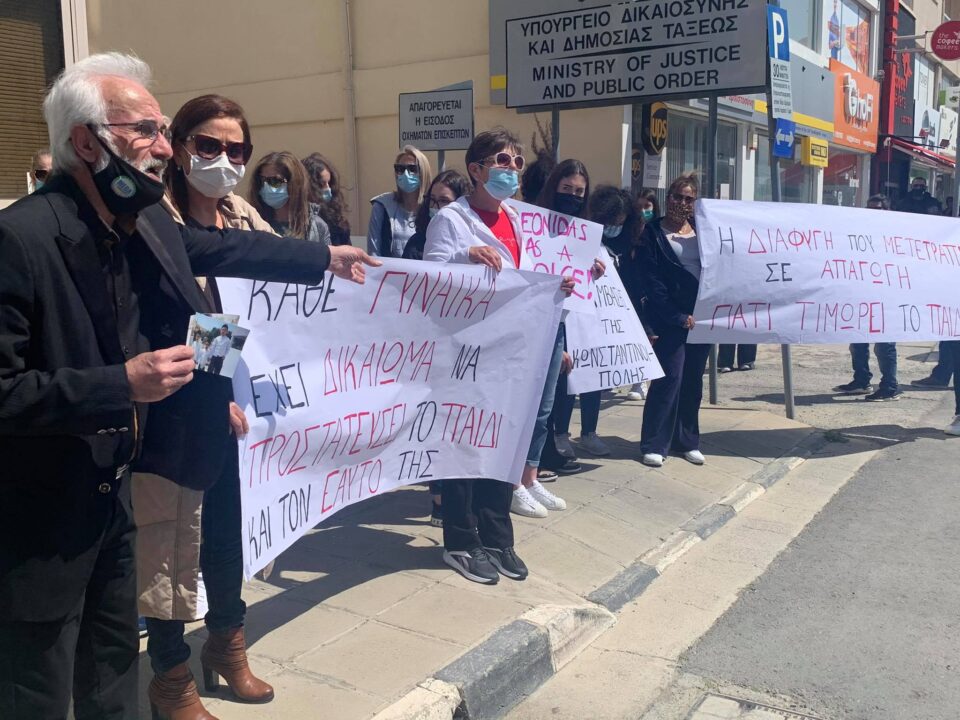 Justice Minister Emily Yiolitis on Saturday pledged the state’s support to a woman ordered by courts to hand her young son over on Monday, so he can be returned to his father in the US.

The mother of five-year-old Leonidas, along with family members and supporters, gathered outside the justice ministry on Saturday calling for help from authorities to ensure the boy’s best interest, after the father won his court case accusing the mother of abducting their son from New York and bringing him to Cyprus in 2017.

The mother told reporters during the protest that she wanted the father in her son’s life but would have preferred for a gradual reunification, proposing visits initially by the father and later by the boy to the US so that they can form a bond.

She added, however, that she fears handing over her son on Monday, without knowing what will happen to him.

“At this stage, it is an outrage, I am being deprived of the right to know where my son will be, travel with my son, being with him in the US,” she said, bursting into tears.

She said she would not mind paying for her son’s tickets to travel to the US to visit his father. That way, she said, the boy would feel safe knowing he will be able to return to his mother. She added that the father can also come visit and spend some time with the boy in Cyprus to get to know each other.

“This is violent what is going on,” she said, asking how it could be right for someone so young to “go, all alone without your mother?”

Yiolitis, who met with the group outside her ministry, said the state would help ensure that the child has a smooth transition in the US and in anything else that could be done.

She also pledged her support to the mother and Leonidas. Yiolitis said, adding that as a divorced mother herself she knows how difficult it is for a mother to be separated from her child.

She said, however, judicial decisions must be respected and that the mother did not follow the appropriate legal procedures in the US to ensure her rights and those of her child. “However, we will not judge her, nor will we ‘punish’ her for not following the right procedures in the US, believing that this was the best way to protect her child.”

She said the state would stand by her, while respecting the court decision which ruled that the child’s country of usual residence is the US, and he must return there.

She noted that the custody of the child has yet to be decided in the US and that this is the beginning and not the end of the process.

“It is a painful path for the mother, in which we will be companions,” she said. The minister said all competent authorities in the US, including the National Child Centre, will assist in the smooth transition and integration of the boy for the duration of the custody trial.

Legal advice will also be forthcoming, she said.

But her comments did little to assuage family members who called on authorities to ask the boy what he wanted.

“It is unfair, inhumane, they ought to ask him, he has a voice, he has an opinion, knows what is going on, he is five years old,” a woman said.

Last February, a Paphos family court ruled that the woman ought to immediately return her underage son to his father in the US. The father, a US national, had reported the woman for abducting the child from New York where they lived when he was 12 months old and bringing him to Cyprus in 2017.

The woman, who said she was forced to flee, citing psychological and physical violence by her partner, had filed a motion to suspend the decision arguing among others that he risked going through a physical and mental ordeal if he was to return.

The father’s lawyer, Panayiotis Tsangaris, told the Cyprus News Agency that the supreme court had rejected the appeal and that the delivery of the child was suspended until March 29.

A support group said in a statement that the Cypriot state needed to immediately intervene to ensure that the mother will travel with her child.

According to the group, the mother is called to hand over the five-year-old on Monday at noon “without any knowledge of where the child will be, how and when he will travel, in what conditions he will live, who and how will take care of the child while the father will work, who will ensure the daily communication of the mother with her child, who will ensure the health and safety of the child in this transition.”

Traffic jams on roads to Troodos