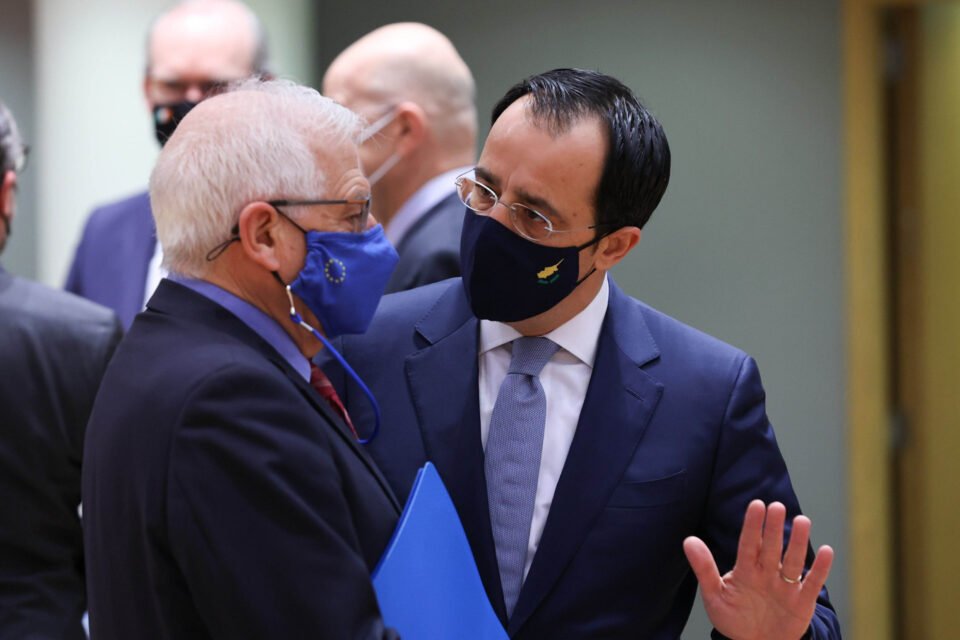 Christodoulides in Brussels with Borrell on Monday

In the late seventies, eighties and nineties one of the main objectives of Cyprus’ foreign policy was to secure the ‘right’ wording in UN Security Council resolutions or reports by the UN secretary-general. Every time a draft was released, the foreign ministry would identify a big danger for Cyprus, newspapers would be up in arms over the allegedly pro-Turkish bias of the UN and permanent members of the Security Council (invariably the Soviet Union) were lobbied to help change the wording which had such dangerous implications.

Sometimes the danger was posed by a subordinate clause or phrase with potential for misinterpretation. These changes, more often than not, were secured and there was public gloating by the government for allegedly saving the country from a possible disaster for the national problem. Many such victories were recorded at the UN over the years, allowing the foreign ministry to have a role in the eyes of the public as the defender against Turkish scheming. That we have seen zero practical benefit from these diplomatic victories – the Turkish occupation is still there – is a topic never discussed.

These battles for the correct wording continue to this day. Only a couple of months ago, it was reported that the government was not satisfied with the UN secretary-general’s draft report for the renewal of the Unficyp mandate and had mobilised the diplomatic machinery to make the necessary changes. Its effort, as always, was successful. Since we joined the EU, the battles at the UN are of lesser importance because at the EU, Cyprus can take positions with practical import, which it has often done in order to punish Turkey for its provocations and intransigence. When Turkey was involved in accession negotiations with the EU, Cyprus blocked the opening of some chapters because Ankara did not recognise the Republic, the objective being to “put Turkey in the dock”.

Since Turkey began violating the Cypriot EEZ and sending in its ships for exploratory drilling, this has once again become the Republic’s policy objective at the EU. In February 2020, the European Council imposed restrictions on two executives of Turkey’s state-owned petroleum company TPAO, and last December it asked the High Representative Josep Borrell to submit a report on the extension of the scope of the restrictions at the March 2021 summit. This had followed the fiasco in which Cyprus had tried to force the EU to impose more restrictions on Turkey, by blocking the imposition of sanctions against Belarus, for its government’s repressive measures against pro-democracy protesters.

Sanctions against Turkey were off the table of last week’s European Council, Borrell focusing instead on the EU-Turkey positive agenda, something that did not go down well in Nicosia. According to a press report on Saturday, Nicosia had rejected three draft reports on the conclusions of the Council as they were judged “negative and with omission”. The third text was approved after incorporating the references President Anastasiades had sought. It was a victory for Nicosia of the type secured at the UN. Turkey now had to meet milestones for the positive agenda, one of which would be developments on the Cyprus problem. The Council also called on Turkey “to abstain from renewed provocations or unilateral actions in breach of international law”. It also reaffirmed “the determination of the European Union, in case of such action, to use the instruments and options at its disposal to defend its interests and those of its member states”.

The punishment of Turkey did not happen, so the government had to be satisfied with the warning, as the council continued its practice of pushing back any decision on sanctions, which would involve blacklisting a few more TPAO executives and would not have any noticeable impact on Turkey. But these would be good for public consumption in Cyprus, which seems to be the overriding concern of Anastasiades and his foreign minister, neither of whom is capable of seeing the bigger picture and utilising a situation for the long-term benefit of the country. They pursue ephemeral victories, of no practical value, which they sell to the public as ground-breaking achievements. If anything, these chip away at any remaining, small prospects for a settlement. This is probably their objective.

Anastasiades, however, might be in for a big surprise at the five-party conference, at which he insisted on the presence of the EU. The EU would be applying the pressure for a deal, given Borrell’s assertion that a Cyprus settlement was key to the normalisation of EU-Turkey relations. Our government should perhaps ask itself, for how much longer will Brussels tolerate a country that represents 0.2 per cent of the union’s population prevent the normalisation of EU-Turkey relations?