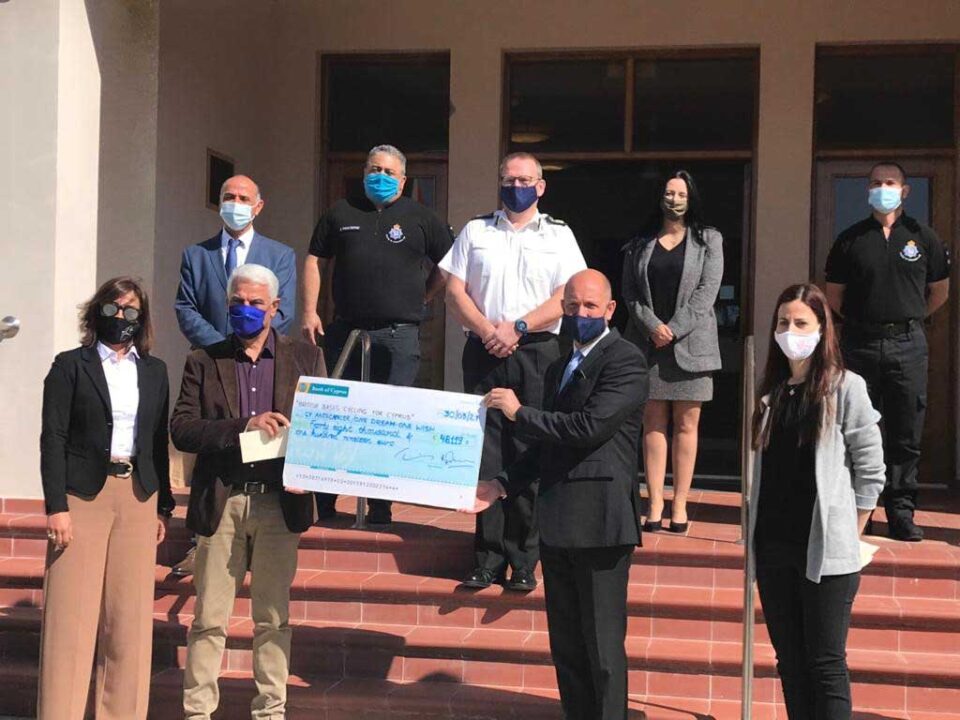 Two cheques totalling €48,119 were on Tuesday presented to the Cyprus Anti-Cancer Association and the One Dream, One Wish charity organisation, by Bases Administrator Major General Rob Thomson.

The money, which will help cancer patients, was raised at the annual Sovereign Base Areas Police Cycle Challenge in October last year.

Covering 153 kilometres from one side of the island to the other, the challenge supported by Republic of Cyprus First Lady Andri Anastasiades, saw police officers cycle alongside military personnel to raise money for the charities.

“It was an incredible day in support of two such worthy causes. I am delighted that I am now finally able to present this much needed money which will help so many people who are suffering from this terrible illness.

Police Chief Constable, Chris Eyre, who himself is a keen cyclist and started the challenge in 2019, added: ‘’The SBA Police is overwhelmed with the response we had and the money raised. We take pride on the close bond forged between the force and the local community and this fund-raising effort was another great example of that. We shall continue the good work and support those in need’’.

Betty Antoniadou, from the Cyprus Anti-Cancer Society, thanked all those involved in raising such a large amount of money. She said: “I am once again overwhelmed that people have shown their sensitivity and offered to help fellow humans. On behalf of the Cyprus anti-cancer association, I would like to thank the British Bases, the Bases Administrator, Major General Rob Thomson, the Police Chief Constable, Chris Eyre, cyclists, local communities, and private companies that supported the organisation and contributed in the financial support of the Association’s relief services’’.

Those words were echoed by George Penintaex, from One Dream, One Wish, who added:

“I would like to express my sincere gratitude on behalf of One Dream, One Wish to British Bases, the Bases Administrator, Major General Rob Thomson, the Police Chief Constable, Chris Eyre, all the cyclists, contributors and sponsors. It takes great effort to make children suffering with different types of cancer, wish come true. All our children and their families express their gratitude for the financial support’’.

The next Sovereign Base Areas Police Cycle Challenge is due to take place in October this year.

How to tell if your dog has arthritis