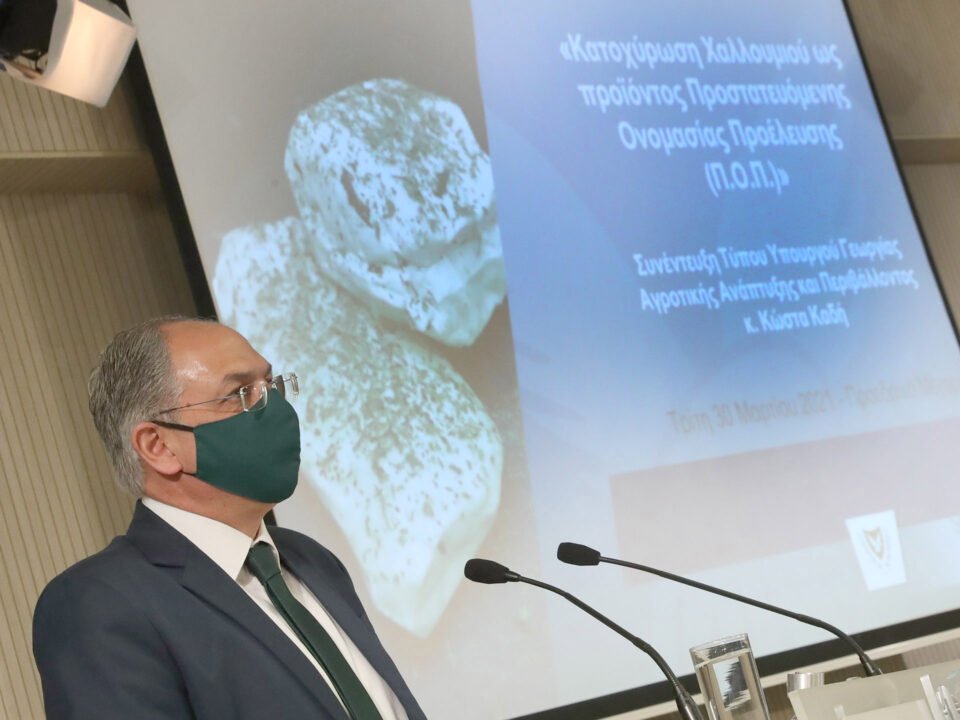 President Nicos Anastasiades hailed the registration of halloumi cheese as a Protected Designation of Origin (PDO) product as historic, which also sent a strong message to Turkish Cypriots on the advantages of operating as a state inside the European Union.

“I think yesterday (Monday) was a truly historic day for Cyprus, especially for the economy, farming, cheesemaking, and in general the efforts that the Republic of Cyprus made for years to register one of the most important GDP contributors,” Anastasiades said after a visit to a Halloumi producer in Athienou.

The president said he hoped the PDO would multiply the financial benefits from halloumi exports, which reached €225m in 2019.

“These benefit a primary sector that will not only benefit Greek Cypriots but also our Turkish Cypriot compatriots,” he said. “And it is a strong message regarding the advantages we could have when we operate as a state.”

Turkish Cypriot producers will be able to sell their product as Hellim.

Cyprus officially filed to the European Commission its application for the registration of the names Halloumi/Hellim as a PDO for cheese made predominantly from sheep and/or goat milk in July 2014. The application covers producers from the whole island and foresees the protection of the name in the two languages, Greek and Turkish – halloumi/hellim.

Kadis said it was an historic positive development for the country and an exceptional investment for future generations.

It is expected, he said, that this success and exclusivity would bring significant investment across the halloumi production chain but also the country’s economy and society.

In a written announcement, goat and sheep farmer unions welcomed the move, saying it will turn a new leaf for all those involved.

They said the expected results of the PDO status will be positive for Cypriot interests and producers.

Kadis said cheese from the north would be traded under strict conditions, rejecting suggestions animals and milk would be imported from Turkey without checks.

Turkish Cypriot halloumi producers will start trading their cheese in one year, after ensuring the area is clear of animal illnesses.

Kadis said the decision also conveyed the message to Turkish Cypriots that through a reunified country they would reap more benefits.

The minister said the path towards registering the national cheese was filled with obstacles, complications, and setbacks.

“It was certainly not an accident since the rising value of our national product has increased pressures and made it vulnerable to imitations with all the apparent dangers it entails.”

It was expected, he said, that the cheese’s huge success would attract foreign companies that started producing similar products and marketed them as halloumi at attractive prices.

At present, such products show a rapid increase with Cyprus being engaged in more than 80 ongoing legal procedures seeking sanctions against companies using the halloumi brand.

The registration as a PDO product would force imitators to drop the name and shield halloumi, “safeguarding the interests of all involved in the production chain,” Kadis said.

“Following the positive votes of Member States, the adoption procedure of the legal text can be launched. The adoption and publication are expected mid-April,” she added.