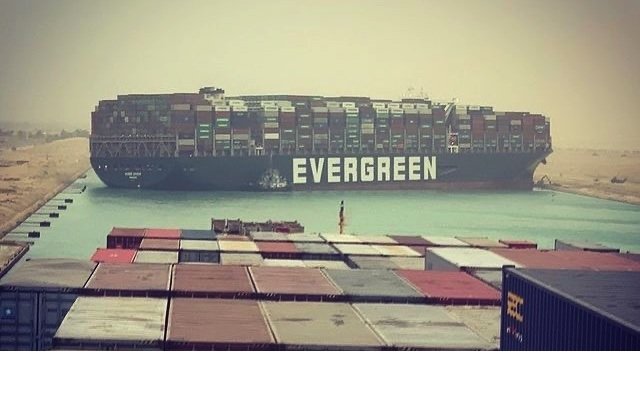 The ship that blocked the Suez Canal

There have been global repercussions from the  recent block of the Suez Canal for six days by a stranded container vessel. The Suez Canal Authority is claiming $1 billion in damages, although that claim will no doubt be in discussion for some time. But the effect on the world’s trade, with deliveries delayed to businesses all over the world, is also heavily damaging.

To understand the importance of the Suez Canal block, and its fall out, we are publishing a report from the Bank of Cyprus Shipping Centre, Global Corporate Banking and Markets.

The Suez Canal connects the Mediterranean Sea to the Red Sea.  It is the shortest maritime route from Europe to Asia, the alternative requiring an additional c.5,000 nautical mile trip (taking 10-14 days) around the Cape of Good Hope.

The Suez Canal is 120 miles long and at its narrowest it is 200 meters wide.

It is estimated that 10-12 per cent of all global commercial maritime traffic transits the canal. 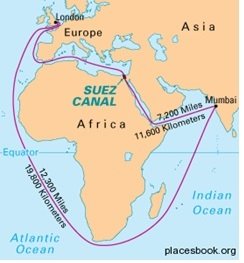 Motor vessel “Ever Given” is one of the largest containerships ever built.  She was constructed in 2018 by the Imabari shipbuilding group in Japan and is capable of carrying over 20,000 TEU1 container boxes.  The vessel is 400m long, nearly 60m wide and has a draft of 16m.  Fully laden, she weighs c.200,000 tonnes. The market value of the vessel is about US$170 million.

According to reports, the vessel is owned by Shoei Kisen, linked to the Japanese Imabari Group. She is chartered to, and commercially managed by Taiwanese container line Evergreen Marine and she is technically managed by German company Bernhard Schulte Shipmanagement.

On Tuesday 23rd of March, m.v. “Ever Given” veered off course whilst navigating the Suez Canal with two maritime pilots2 on board, and ended up diagonally across the canal with bow and stern aground.

The cause of the incident is being investigated but initial reports suggest that strong winds and bank effect3 may have been contributing factors. 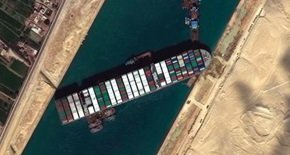 Salvage teams worked on land and water, excavating the eastern embankment where the vessel bow was stuck and dredging sand from underneath the hull.  Several large tugboats were employed and, with the assistance of high spring tides, the “Ever Given”  was finally freed on Monday 29th of March.

It is estimated that the blockage held up nearly US$10bn worth of trade every day.  It is reported that over 300 ships were held in waiting to transit the Suez canal, whilst others had already re-routed around Africa.  A wide range of cargoes will face delays of many days and weeks.

Such incidents are generally positive for market freight rates, as the combination of traffic congestion and vessels having to take longer routes, takes vessels out of the market for longer and reduces vessel supply. FFA4 rates for dry bulk vessels initially increased and certain other types such as LR25 tankers also benefitted.  The longer term impact will depend on how quickly the congestion can be cleared.

The total cost of salvage and claims by a number of affected parties, is unknown at this stage. Vessels like the “Ever Given” are generaly insured for various perils. Damage to the vessel itself from the grounding would be covered by Hull and Machinery (H&M) insurance. Salvage and towing operations may be covered under ‘general average’ provisions by a combination of H&M and cargo insurance. Third party claims such as cargo claims (for perishable goods or delays in delivery), damage caused to Canal infrastructure or claims for obstruction/ loss of income, would be covered by Protection and Indemnity (P&I) insurance. P&I cover is provided by mutual ‘clubs’ of shipping companies. The top thirteen P&I clubs are part of the International Group of P&I Clubs, with a reinsurance tower which covers losses up to an available limit of  US$3.1 billion.

Some preliminary thoughts on insurance claims for the specific incident:

Similar incidents are unusual, and although known to the shipping industry and its financiers, their overall impact is difficult to assess beforehand.  For that reason, it is necessary for appropriate marine insurance cover to be in place.

Under the usual terms of ship-financings, vessel insurances are assigned to the bank and are checked & monitored regularly. In addition to this, the bank normally requires that Mortgagees Interest Insurance (MII) and Mortgagees Additional Perils (MAP) policies are also taken out. These provide cover to the bank for the outstanding loan & interest, in case of non-payment under the vessel insurances due to breach of warranties and conditions, and/or when there is insufficient insurance liability cover for a claim.

Future Impact from the incident?

Previous maritime accidents such as the “Exxon Valdez”6 have resulted in changes to ship design and navigation procedures, to improve safety.  Incidents that cause blockage of the Suez Canal are indeed rare but there have been concerns that the ever increasing size of ships, particularly containerships, is outpacing the industry’s ability to deal with the growing risk of such large assets. There will be a full enquiry into what caused the incident and what action should be taken to prevent a recurrence.  The shipping industry is closely following the developments.

1 Twenty-foot equivalent unit, based on the volume of a 20-foot long intermodal container, also known as a ‘box’, which can be easily transferred between ships, trains and lorries.

² Maritime Pilots are licenced navigatoral experts, guiding vessels for safe navigation when entering ports, during berthing, anchoring or transitioning narrow channels. The pilot plays a crucial role and has good navigational knowledge of the specific waterways.

³ Bank effect occurs when a vessel navigates an enclosed waterway and pressure waves from the hull interact with the bank, causing pressure differentials.  This can result in the stern of the vessel swinging towards the bank, causing deviation from the intended course.

Iheanacho emerges as key man for Leicester in run-in