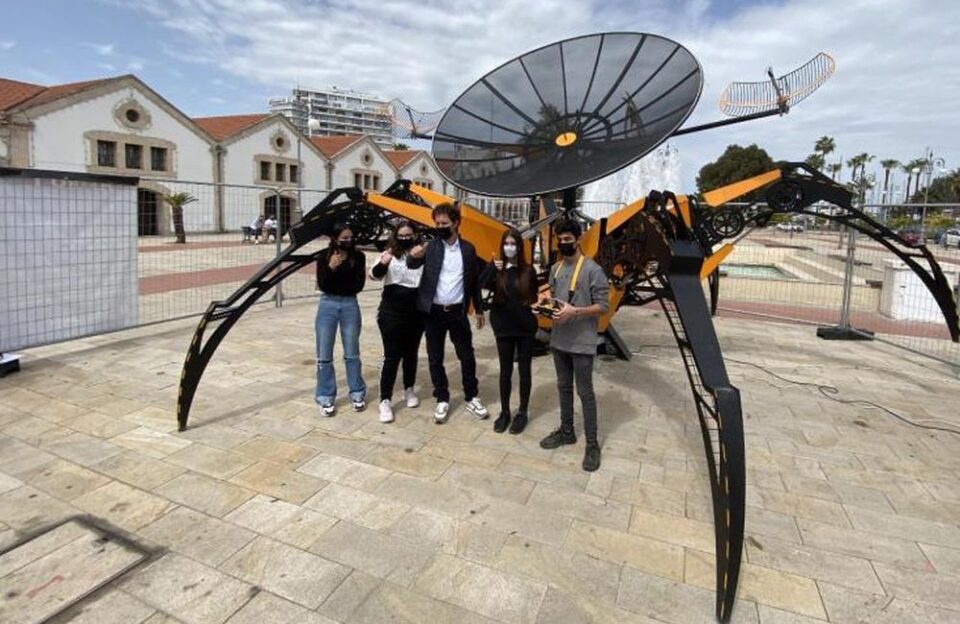 With the image of its impressive spider-like machine being seen around the island, Pascal’s Astro 1 project has received a lot of attention over the last few days.

The student-built robot is one of the biggest of its kind in the world, weighing close to 1,400kg, boasting a circumference of 10 metres and standing 3 metres tall.

The Astro 1 can function as a mobile satellite station from which students can receive a live video feed sent by micro-satellites launched into the stratosphere.

A total of 1,700 students from 27 different schools around Cyprus have participated in activities with the robot at their core, with the Astro 1 facilitating a wide range of student-led experiments.

Despite the project catching the wider public somewhat unaware, with people expressing their surprise at such an interesting undertaking coming out of Cyprus, there was a lot of work and forethought put into it.

“We started three years ago with just four students. It was a school project done through one of the programmes here at the school. We called it the engineering club,” said Pascal Space Centre Project Leader Elpidoforos Anastasiou.

“We wanted to keep outdoing ourselves and keep setting new challenges. Every year we started with some rough ideas, even ideas which seemed difficult to do,” the ICT teacher explained.

“My role as supervisor is to help them understand what can be achieved and how we can go about it and implement the idea. After three years we found support from various centres and organisations, including the Cyprus University of Technology (Tepak). This robot is another educational platform based on that initiative that started three years ago,” Anastasiou explained.

“The first project was a micro satellite which sent meteorological data back to the ground, while the second one was capable of sending live video. We actually broke a record at the time for the longest distance video sent back to the surface, which was around 60 kilometres,” he explained.

“The third year included the first space centre designed specifically for educational purposes in Cyprus, while this year, the fourth year overall, finds the project you see before you, the Astro 1 robot, a mobile space station receiving data sent from students,” Anastasiou added.

On March 26, the team launched a weather balloon 90,000 feet into the air with a micro satellite sending back information to the Astro 1 robot, travelling for a total of three hours and tolerating temperatures of minus 50 degrees Celsius.

Despite the focus on the robotic technology being used here, as well as the space science applied, the project’s scope goes beyond those two fields. It encompasses all the STEAM elements of science, technology, engineering, arts and mathematics.

“This project is not just about science and engineering. Some students want to become journalists, others want to work in marketing, others in videography and video editing. All of these students became involved with different aspects of this project which allowed them to showcase their own talents and utilise their interests,” Anastasiou said.

“Our students also did an amazing marketing campaign on Facebook and TikTok to promote it around the world. They created dedicated social media accounts, used the relevant hashtags, everything. It’s an amazing project. They did an awesome job.”