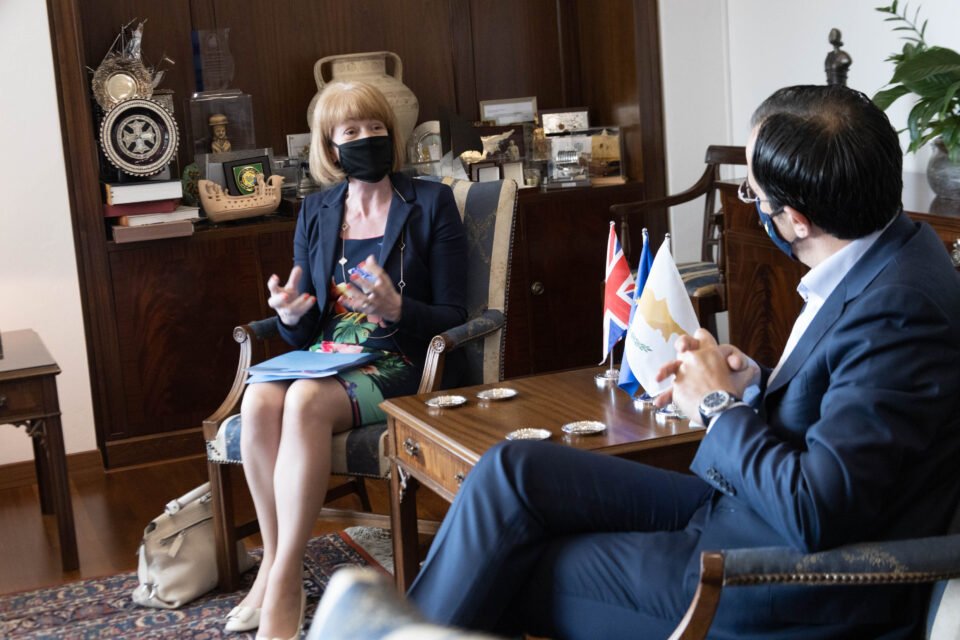 Britain said on Wednesday it was important for all parties involved in Cyprus to seize the opportunity presented by the upcoming conference taking place in Geneva from April 27-29.

The UK’s Foreign Minister for the European Neighbourhood Wendy Morton after a meeting with President Nicos Anastasiades on Wednesday at the presidential palace reiterated Britain’s support for the UN-backed talks.

In posts on Twitter she said: “It is important that all parties seize the opportunity presented by the UN Secretary-General’s 5+1 talks to push for a settlement which will benefit all Cypriots and enhance regional stability.”

Morton added that the UK and Cyprus “have an historic partnership built on shared history, common values & legal systems & joint membership of the Commonwealth”.

According to an announcement from the presidential palace after the meeting, Anastasiades had made clear his “readiness and determination to be creatively involved in the talks” but the basis must remain UN resolutions and EU principles.

Earlier in the day, during a visit to the Health Insurance Organisation (HIO) head office, Anastasiades said the positions of the Greek Cypriot side were clear and stood as they were presented to the EU Council.

Commenting on reports that UN envoy Jane Holl Lute, who is due in Cyprus on April 11, had low expectations for the Geneva talks, Anastasiades said all expectations or lack thereof, were down to the positions of the Turkish side.

“It was to ensure that the Turkish president heard directly from the European side what are the requests and the expectations of the European Union on a series of subjects,” Mamer said.

“There will be a time for us to assess whether Turkey has taken these requests into account and it will be next European Council in June.”

On the same issue, Nabila Massrali, the European External Action Service (EEAS) spokesperson told CNA that “the EU stands ready to provide whatever assistance both leaders and the UN would find most useful. The Cyprus problem is clearly an EU problem: Cyprus is a member state of the union, now and after reunification; regional stability and prosperity in the Eastern Mediterranean is closely bound to a solution to the Cyprus problem,” she said.

“A future settlement needs in particular to comply with the EU acquis and safeguards, the integrity and decision-making responsibilities and processes of the EU” she added.

Massrali also said  the EU would be an observer at the Geneva conference. “The sooner the EU becomes fully involved in the renewed settlement talks, the better,” she added.

Asked about an official invitation to the talks from the UN Massrali said the EU would be an observer. “The EU has a delegation in Geneva so de facto we are in Geneva,” she said.

Minister urges House to press ahead with justice reform