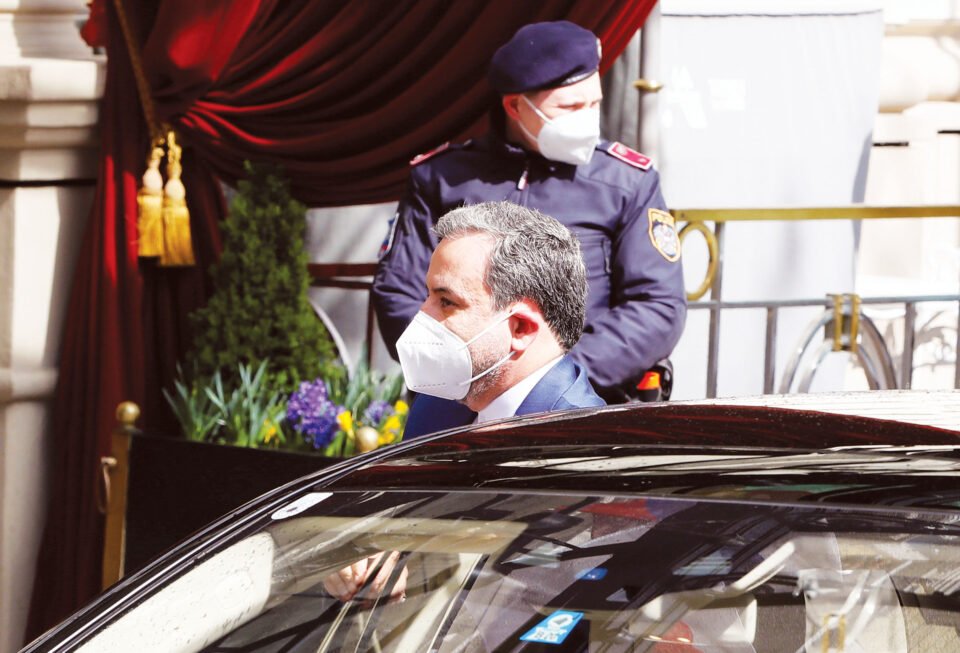 Iranian Deputy at Ministry of Foreign Affairs Abbas Araghchi arrives at a meeting of the JCPOA Joint Commission, in Vienna

We’re safe from Iran’s nuclear weapons which never existed anyway, but what about the others?

First, the good news. The United States and Iran had talks in Vienna on Tuesday, and the nuclear deal they and all the other great powers signed in 2015 is coming back.

It’s not exactly back yet. After Donald Trump unilaterally pulled out of the treaty in 2018 and reimposed harsh sanctions on Iran, the Iranians retaliated by slowly deviating from their own commitments under the deal one baby step at a time. So now there has to be agreement on a timetable for unwinding those steps as well as cancelling the US sanctions.

On a better run planet, the US special envoy for Iran, Rob Malloy, would just declare that all the US sanctions on Iran wrongly put in place by the discredited previous administration are cancelled as of today.

The Iranian delegation, led by deputy foreign minister Abbas Araghchi, a veteran of the 2015 talks, would reply that Iran will immediately return to compliance with all the terms of the treaty, and invite UN inspectors to verify that all its temporary deviations from treaty obligations over the past three years have been reversed.

And we would all live happily ever after. However, in the real world….

The negotiators in Vienna are not even in the same hotel. All the countries that are still observing the treaty (China, France, Germany, Iran, Russia and the United Kingdom) are in one hotel, and the American mission is in another, with messages going back and forth between the two parties. Porcupines mate with less difficulty, but there has already been some progress.

“The United States knows that, in order to get back into compliance, it’s going to have to lift those sanctions that are inconsistent with the deal that was reached with Iran,” said Rob Malloy.  Iranian government spokesman Ali Rabiei replied that he “saluted” Malloy’s remarks. “We find this position realistic and promising,” he added.

Two working groups have been set up that include American representatives, with the task of choreographing reciprocal moves by the United States and Iran to return to the treaty and a target of full compliance by both sides within two months. Just in time for Iranian moderates to claim credit for ending the US sanctions a week or so before the June election.

So that’s probably sorted, but what about all the countries that actually do have nuclear weapons? Iran originally got into trouble because it signed the Nuclear Non-Proliferation Treaty in 1970 and later tried to get nuclear weapons anyway, but the countries that already had nukes when they signed the NPT have obligations too. How are they doing?

The NPT states that “nuclear-weapons states agree to…pursue nuclear disarmament aimed at the ultimate elimination of their nuclear arsenals.” But it has been a long pursuit: fifty years later not one of them has actually managed to catch the damn thing.

The United States has got turned around somehow and is pursuing in the wrong direction. It’s in the midst of a trillion-dollar-plus ‘upgrade’ of its nuclear forces, including a new generation of land-based intercontinental ballistic missiles (ICBMs) and new submarine-launched cruise missiles.

According to President Vladimir Putin, Russia has developed nuclear-powered cruise missiles and torpedoes with unlimited range, a hypersonic vehicle called Avangard to deliver nuclear weapons at low level and ultra-high speed, and a new ultra-heavy ICBM called Sarmat able to carry even more and bigger warheads (10-15) over a longer range (18,000 km.).

There have also been reports of a new nuclear-powered drone torpedo able to deliver a 100-megaton warhead (biggest ever tested was 50 megatons) over a range of 10,000 km. Then it would explode off an enemy’s coast to create a tsunami wave 500 metres tall to inundate the coastal regions with highly radioactive water. But maybe this one is a fiction.

Then there’s Little Britain with its four submarines that carry nuclear-tipped missiles. Prime Minister Boris Johnson recently announced that he was increasing the number of warheads they carry from 180 to 240, but it doesn’t really make much difference.

Traditional UK strategy is ‘no first use’, which means Britain’s retaliation would be on cities, not on empty silos. So you’re just bouncing the rubble after the first few dozen warheads explode.

That’s probably why Johnson broke with tradition and said that Britain might use nuclear weapons in response to non-nuclear attacks, including even cyber-attacks. One way to compensate for not really being very dangerous is to sound very reckless.

But at least we’re safe from Iran’s nuclear weapons, which never existed and still don’t.