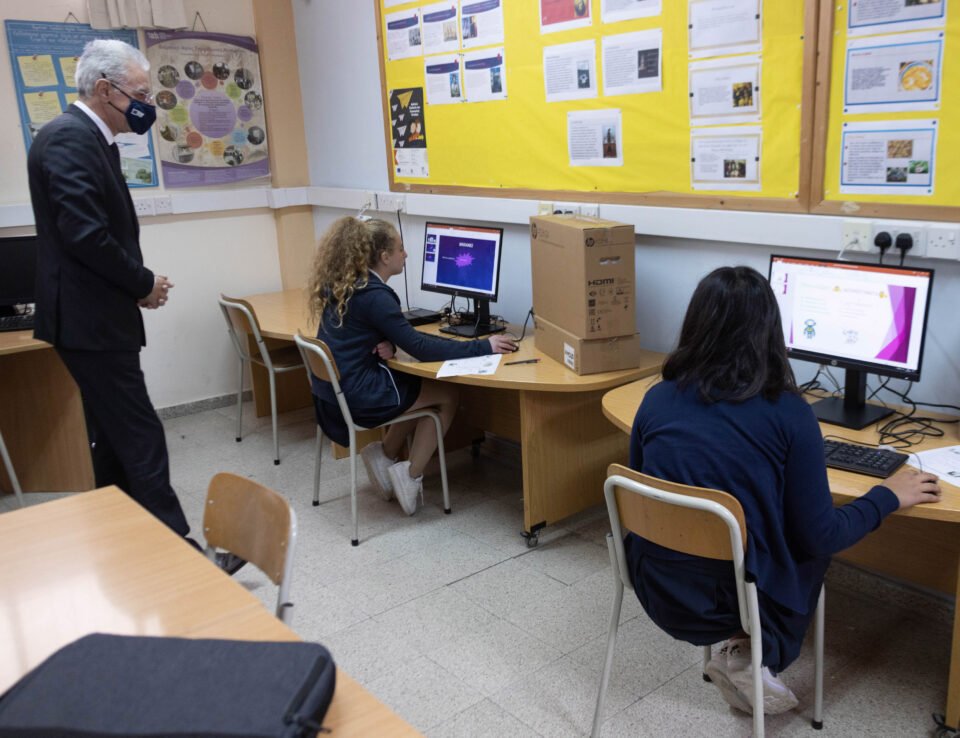 Education Minister Prodromos Prodromou on Monday delivered new computers to a Nicosia primary school with the pledge that all schools will be suitably equipped so as to facilitate the use of digital technology.

He told reporters that the ministry had taken delivery of 3,555 computers which it was distributing to primary and secondary schools. Work was also underway on 6,600 digital classrooms.

“The government has approved and is implementing expenditure of €2.2 million for the 3,555 computers now being distributed to the schools and another €11.4m which were approved in August 2020 for the large scheme to create digital classrooms which we are implementing together with the deputy ministry of research, innovation and digital policy,” he said.

The computers were being distributed to schools of all levels, either as in the case of some primary schools because they do not have a satisfactory number of computers, or to replace older equipment.

Also being implemented is a scheme that was recently approved by the education ministry for teachers who use their personal computers to teach.

The aim is to make the best of digital technology, not only where remote teaching is necessary because of a pandemic, but as permanent aspect of education, the minister said.

Ayios Spyridonas primary school where the minister visited is a small school located in a refugee settlement which participates in a programme for educational and social integration.

“The number of pupils does not change the situation. There must be computers everywhere, they are essential,” he said.

Asked about the protocol for positive cases after tougher proposals were unveiled and then put on ice, as well as what will apply in the Pancyprian exams for school leavers, Prodromou said it was important to give an opportunity to everyone who can to take the exams, even potentially those who may be close contacts.

“This is what we are aiming at, but we have not yet arrived at conclusive solutions. We are discussing with the team of experts, we must, and we will, find the way, as in the previous Pancyprian exams in the summer of 2020.”

Schools are continuing to operate with the previous protocol and contact tracing instructions. The education ministry is in consultations with the health ministry and the experts, and where possible changes that may help will be introduced.

“For the time being, the protocol that was in force previously remains in force, and I hope it is being implemented across the island at all the schools because we do not need any disruptions. These are the final weeks, with considerable effort we managed to resume in-person teaching at the gymnasiums. Not much time is left, and we must make the best of it.”

Get a cool candle and make a difference this Easter