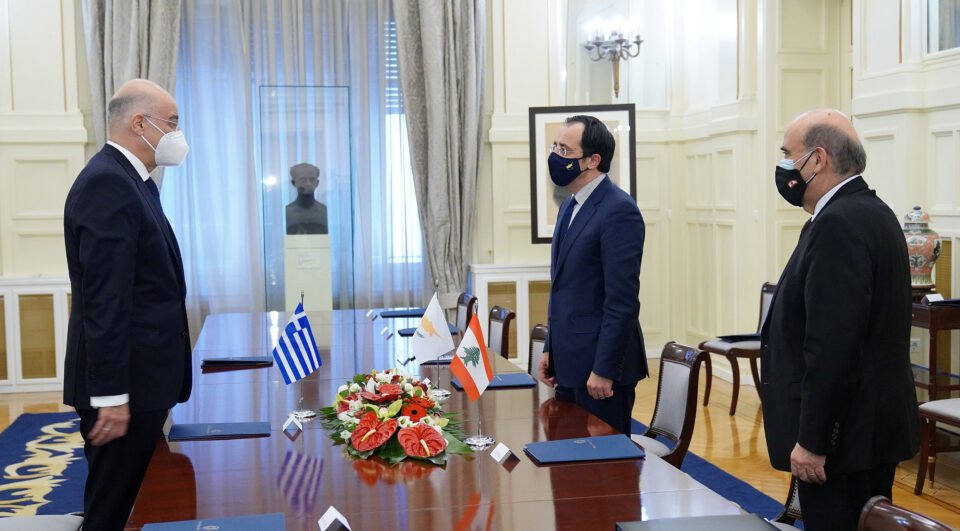 Tripartite, regional cooperation is not just declarations but aim at producing tangible results to the benefit of the peoples concerned, especially the new generation, Foreign Minister Nicos Christodoulides said on Thursday after a meeting in Athens with his Greek and Lebanese counterparts.

Christodoulides told the Cyprus News Agency the tripartite meeting between Greece, Cyprus and Lebanon, was a good opportunity to review the cooperation so far, to exchange views, discuss how to strengthen it, as well as ways to support Lebanon in the current difficult situation it faces.

He added that with his Greek and Lebanese counterparts, Nikos Dendias and Charbel Wehbe respectively, they reaffirmed during the meeting the belief that tripartite cooperation is not just declarative, but the goal was and remains to produce tangible results for the benefit of the three countries’ peoples, mainly the younger generation, and the region in general.

“I sincerely believe that the most important message of our presence in Athens today is clear: Lebanon is going through the most serious crisis of recent decades, but it is not alone,” he said. He referred to the “generous response” for aid by the governments and people of Cyprus and Greece, together with the international community, the day after the tragic explosion in Beirut last summer.

“Both Cyprus and Greece, as EU member states, have expressed our readiness to continue to contribute as and where necessary to support the unity, sovereignty, integrity and stability of Lebanon, as well as the well-being of its people,” he said. He added that Nicosia and Athens have conveyed “these clear messages to our partners in the European Union.”

Christodoulides stressed that no one can impose solutions from outside in a third country, adding that the strong will of the EU and the international community in general to support Lebanon is unquestionable, but in no way can, should it replace actions expected from the Lebanese political leadership, in cooperation with the people of the country.

Priority, he said, is the formation of a credible government in Lebanon, “which will be able to take the – admittedly difficult – decisions required and to proceed with the long-needed structural reforms, which will allow the release of the promised economic and technical aid and will meet the just demands of the Lebanese people.”

For Cyprus and Greece, he added, Lebanon is not just a neighbouring country. “Our peoples are connected with brotherly ties for centuries until today, and our interest in the country and its people is sincere.”

Christodoulides also said that, together with Dendias, they expressed to their Lebanese counterpart the wish that his country actively participates in the Permanent Secretariat of Tripartite Mechanisms, which will operate in Nicosia, and reiterated their readiness to hold the first Cyprus – Greece – Lebanon Summit in Cyprus, as soon as the necessary preparations are completed, and the political conditions allow it.

They also exchanged views on developments in the eastern Mediterranean region and the wider Middle East, with particular emphasis on Syria and Libya, he added. “We reiterated our position for an institutionalised participation of Lebanon in the energy cooperation schemes of the region, which operate in accordance with international law, and in particular the relevant 1982 Convention on the Law of the Sea.”
Prior to the tripartite meeting, Christodoulides had a private meeting with Dendias and discussed issues of preparation for the informal five-party summit on the Cyprus problem, to take place in Geneva later this month They also discussed Dendias’ contacts later on Thursday in Ankara with the Turkish president and foreign minister.