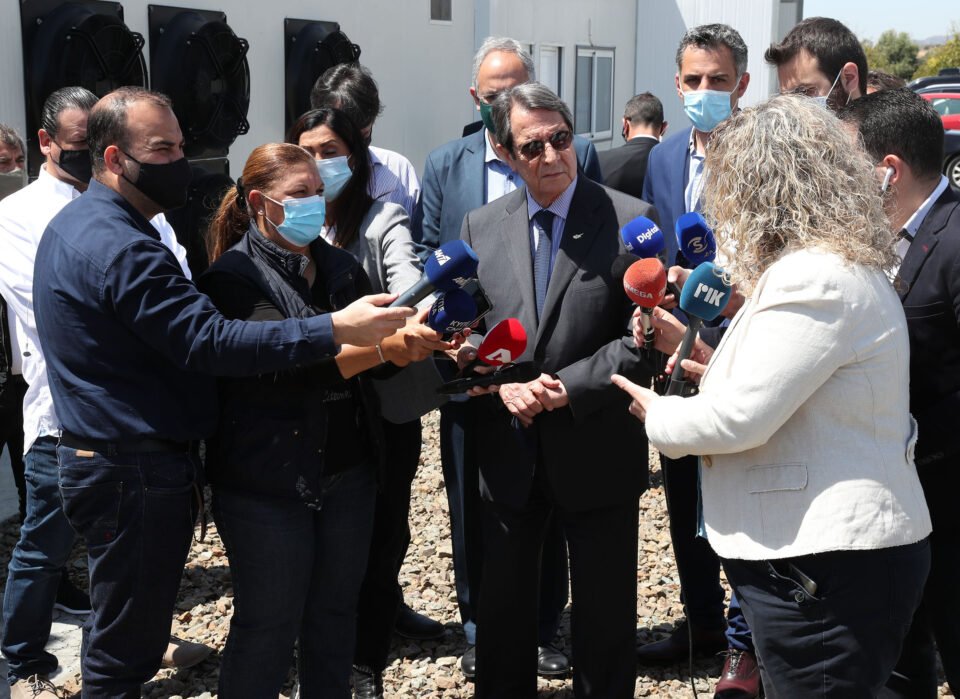 President Nicos Anastasiades speaking to the press on Friday (PIO)

Two separate states and sovereign equality have no place in a Cyprus settlement, President Nicos Anastasiades said on Friday in response to Turkey’s views on the issue, which were reiterated by foreign minister Mevlut Cavusoglu on Thursday.

“Turkey confirmed yesterday in the loudest possible way its unchangeable position on the Cyprus issue, which has been marked even since the establishment of the Republic of Cyprus,” the president said.

On Thursday, Cavusoglu said that a bizonal-bicommunal federation would not be on Turkey’s agenda at the upcoming informal five-party summit in Geneva, reiterating that the Turkish side is set on establishing two separate states in Cyprus.

“There is no sense to negotiate the impossible again, it is a waste of time,” he told Turkish channel NTV.

Later in the day, during a meeting in Ankara, he and his Greek counterpart Nikos Dendias rowed over a number of topics including the Cyprus issue.

Dendias said that “the only solution can be the formation of a bizonal-bicommunal federation,” drawing praise from Cypriot party leaders.

Anastasiades said on Friday he was “sincerely saddened” by Turkey’s stance, “which is not unprecedented as it has been maintained throughout the negotiation process on the Cyprus issue,” he said, blaming the lack of a solution on the Turkish side’s “inflexibility”.

“Our aim is to counteract these unacceptable positions expressed either by the President of Turkey and its foreign minister, or by the leader of the Turkish Cypriot community,” he said.

The creation of two states and sovereign equality is not possible, because it presupposes the existence of sovereignty, he continued. The aim for the Geneva conference is “to find a solution that will transform the Republic of Cyprus into a bicommunal state that will not be a Turkish protectorate and will guarantee the rights of all Cypriots, Turkish and Greek alike, he emphasised.

Responding to concerns that Turkey’s position might be showing that this the last chance for a Cyprus settlement, the president said that the conference, which is set to begin on April 27, is the result of over three years of efforts to restart talks on the issue.

“It is not up to me to say whether the timing is appropriate,” as it came after a slew of negotiations and after “the failure of so many efforts where our side showed a positive attitude. Negative intentions came always from Turkey and the Turkish Cypriot side,” he concluded.

On Friday evening, Cavusoglu met with ‘foreign minister’ Tahsin Ertugruloglu in the north where they discussed the upcoming informal five-party summit.

Ertugruloglu congratulated Cavusoglu on his stance during his meeting with Dendias, commenting that the latter’s behaviour, where he “threatened Cavusoglu with the EU card” justifies the view that the EU should not be in Geneva.

“Obviously, the EU cannot make a positive contribution to the issue, nor is it a neutral and objective union,” he said. “On the contrary, it is a union against us. It has no place at the negotiating table”.

Later on, he met Turkish Cypriot leader Ersin Tatar, who once again reiterated his wish for a permanent partition of the two states, saying that if it is achieved then it would be a “win-win”.

Finally, Cavusoglu clarified that no new negotiations will begin at the Geneva conference, and talks will “under no circumstances” pick up from where the Crans-Montana meetings left off.

Ten Syrian men picked up off boat in Protaras