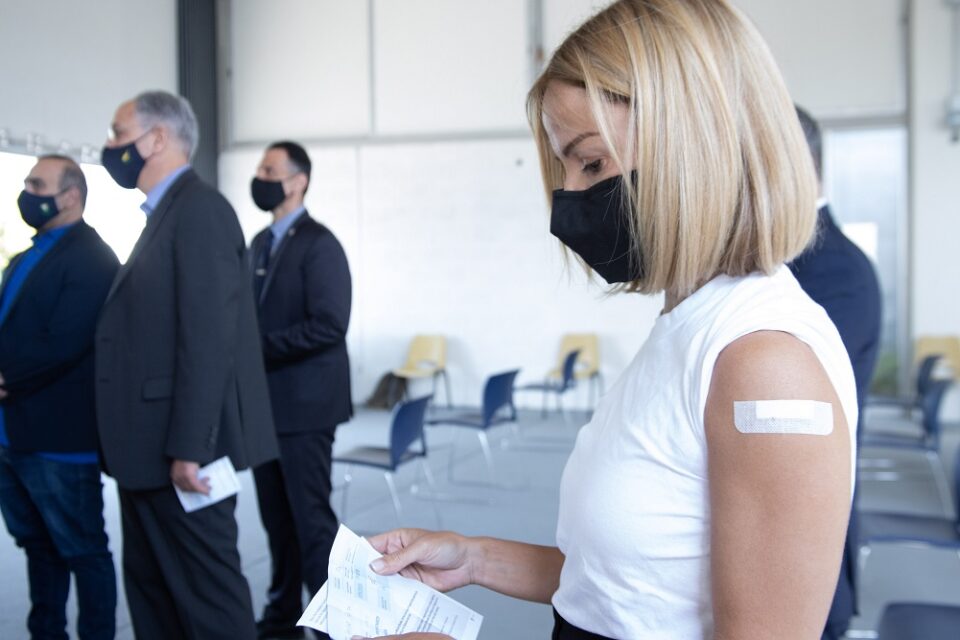 Justice Minister Emily Yiolitis after her vaccination with AZ. (PIO)

It was rather amusing watching the members of the council of ministers arriving at the state fair vaccination centre on Thursday, like a group of tourists on sightseeing visit, so they could all be given the AstraZeneca (Vaxzevria) shot. This was a show for the public, a significant proportion of which refuses to have the AZ vaccine after the negative publicity it had received worldwide over possible risks, and the decision of many EU governments to restrict its use to certain age groups.

The government was obliged to stage this theatre as one way of allaying widespread fears that are threatening the success of the vaccination programme. Disy chief Averof Neophytou had done the same thing on Monday, turning his vaccination into a media event, in the hope it would persuade more people to have the AZ jab. Meanwhile, Health Minister Constantinos Ioannou has been at pains to reassure people that “vaccination saves lives” and that the make of vaccine was irrelevant.

This, however, is not the case for many people who have been following the stories surrounding the vaccine and the bizarre stance taken by the European Medicines Agency (EMA), which last month suspended its use for a few days in order to reassess it. Ten days ago, the EMA reported a possible link between the AZ vaccine and very rare cases of blood clots, while repeating that its benefits far outweighed the risks. If this was meant to reassure people it failed spectacularly. If anything, it reinforced their fears, most ignoring that the proportion of people that had experienced the adverse effects was 0.0005 per cent.

The public’s unwillingness to have the AZ jab had caused the vaccination appointment portal to crash twice in eight days. On Thursday it crashed again within minutes of opening because of a huge number of people trying to book a Pfizer vaccination. Deputy minister for digital policy, Kyriakos Kokkinos, said that while the numbers of people in the eligible age category were estimated to be 26,000, there were 120,000 users attempting to book appointments when the portal opened on Thursday morning. Those eligible had recruited friends and family in the hope one of them would be able to book a non-AZ vaccination.

Others are applying “intense pressure” on their personal doctors to book them a vaccination of their choosing, threatening to change doctor if they did not get an appointment. “Because the quantities of other vaccines are still very small and of AstraZeneca much bigger, we cannot help people get what they want,” said Dr Andreas Polynikis, head of the family doctors’ association.

Although this terrible situation is not of the government’s making, it has been compounded by the decision to offer people a choice of vaccine. Once this was done, it reinforced the idea of ‘consumer sovereignty’ among people, who now believe that choosing the make of vaccine is a consumer right, no different from choosing a brand of cereals in the supermarket. Once created, this impression is extremely difficult to change without people protesting that their ‘rights’ are being violated.

In other countries no choice is offered. People were notified about the time of their appointment and were vaccinated with whatever make of vaccine was available. Of course, in Cyprus this would raise suspicions that people with political or other connections would get their preferred vaccines, even though the health ministry could have put in place safeguards to ensure this did not happen.

Even the way the appointments were made could have been different, with people submitting an application online for their preferred vaccination centre and being subsequently notified about the time and date. This would have underlined the fact that the whole vaccination programme was controlled by a central authority and personal choice was off the agenda. People would have been made to understand that getting a vaccination is different from booking an appointment for a haircut.

It is probably not too late for the health ministry to change the procedures and eliminate personal choice from the programme. If it decides it is too late to do this, it should continue the sensible policy of opening appointments for lower age groups and leaving all those who do not want to have an AZ jab unvaccinated. They are the ones who will be at risk but it will be their personal choice. Herd immunity can still be achieved by continuing the vaccination programme among the willing and the government target of having 70 per cent of the population vaccinated by the end of June can still be met. As for those who believe they deserve a ‘better quality’ vaccine than the one given to the majority of the population, they should be made to wait.

Tales from the coffeeshop: The Pfizer elite – vaccination the latest status symbol