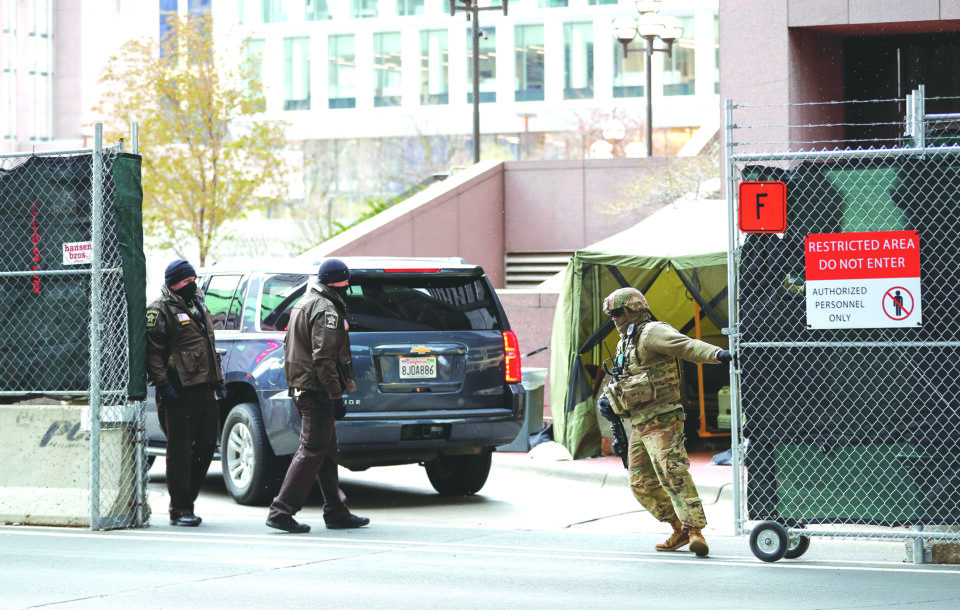 A prosecutor told jurors to “believe your eyes” as he replayed video of George Floyd‘s death last May beneath the knee of Derek Chauvin in closing arguments on Monday in the former police officer’s murder trial.

Chauvin’s lead lawyer, Eric Nelson, later countered that Chauvin behaved as any “reasonable police officer” would, arguing that he followed his training from 19 years on the force.

Over and over again, Steve Schleicher, a prosecutor with the Minnesota attorney general’s office, repeated a phrase: “Nine minutes and 29 seconds,” — the length of time Chauvin was captured on video on May 25, 2020, with his knee pressed into the dying Floyd‘s neck.

Although the jury’s verdict will be seen as a reckoning in the way the United States polices Black people, Schleicher emphasized in remarks that lasted nearly two hours that the jury was weighing the guilt of only one man, not a system.

“This wasn’t policing; this was murder,” Schleicher told jurors. He cited the motto of the Minneapolis Police Department, which fired Chauvin and three other officers after Floyd‘s arrest: “To protect with courage and to serve with compassion.”

Chauvin, who is white, pushed his knee into the neck of Floyd, a 46-year-old handcuffed Black man, for more than nine minutes outside the grocery store where he had been suspected of buying cigarettes with a fake $20 bill.

“He was trapped with the unyielding pavement beneath him, as unyielding as the men who held him down,” Schleicher said, before playing some of the extensive video of Floyd‘s death, which he said showed Chauvin mocking Floyd‘s struggle to breath.

His lead lawyer, Eric Nelson, said prosecutors were wrong to dismiss his theory that carbon monoxide poisoning from the nearby police car’s exhaust may have contributed to Floyd‘s death.

He repeated a single phrase scores of times, saying Chauvin behaved as a “reasonable police office” would in dealing with a man as “large” as Floyd, who was struggling against being put in a police car when Chauvin arrived, responding to a call for back-up.

Chauvin, dressed in a grey suit and dark blue shirt and tie, removed his face mask, worn as part of the coronavirus pandemic’s social-distancing requirements, and watched his lawyer defend him.

The extensive video footage of Floyd‘s death from multiple angles is the heart of the prosecution’s case. Jurors have spent hours rewatching the videos in the courtroom.

“Believe your eyes,” Schleicher said. “This case is exactly what you thought when you saw it first, when you saw that video.” He said it shows Chauvin using unreasonable, and therefore illegal, force in compressing Floyd‘s torso against the road, starving him of oxygen.

But Nelson used the same videos to try to prove the opposite point: The fact that Chauvin continued kneeling on Floyd even as he knew he was being filmed was evidence he believed he was responding to the scene in a reasonable way, Nelson said.

“In this case, the totality of the circumstances that were known to a reasonable police officer in the precise moment the force was used demonstrates that this was an authorized use of force, as unattractive as it may be,” Nelson said. “And this is reasonable doubt.”

National news networks carried live broadcasts of testimony after the first of more than 40 witnesses took the stand three weeks ago, though the coverage was sometimes interrupted by fresh episodes of police violence caught on camera.

The closest instance occurred a few miles from the courthouse in downtown Minneapolis when a white police officer fatally shot a Black motorist, Daunte Wright, on April 11 in a traffic stop in the nearby suburb of Brooklyn Center.

As angry protests swelled, Minneapolis and state officials have ramped up security precautions. The tower in which the courtroom sits is ringed by barbed wire and armed soldiers from the National Guard.

For the second-degree murder charge, 12 jurors will have to agree that prosecutors proved beyond a reasonable doubt that Chauvin committed a felony, in this case assault, that was a substantial cause in Floyd‘s death. They do not have to find that Chauvin intended to kill Floyd.

That crime carries a punishment of up to 40 years in prison, although sentencing guidelines call for a shorter sentence of up to 15 years for someone with no prior convictions.

The jury, along with two alternates, is comprised of six white women, two white men, three Black men, one Black woman and two multiracial women, according to court records. They will be sequestered in a hotel outside of deliberation hours.