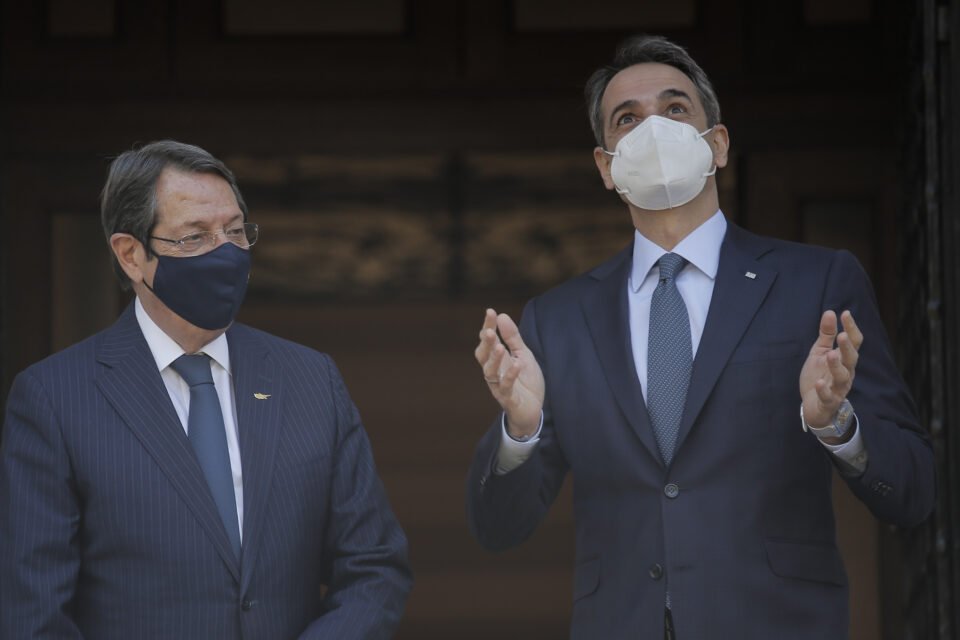 Efforts are focused on finding a way so that both communities on the island feel safe, President Nicos Anastasiades said on Wednesday in Athens upon his arrival at the office of the Greek Prime Minister Kyriacos Mitsotakis to discuss developments on the Cyprus problem.

The president is in Athens for consultations with Mitsotakis and coordination ahead of the five-party summit on the Cyprus problem under UN auspices, slated to take place next week in Geneva.

Greece, along with Turkey and the UK are guarantors of Cyprus’ independence and territorial integrity, as per the 1960 Treaty of Guarantee. As such, they will also take part in the Geneva summit at foreign minister level.

Upon his arrival at the Maximos Mansion, the Greek prime minister’s office and residence, he was welcome by Mitsotakis, who, reiterated Athens’ support of a bizonal bicommunal federal solution in Cyprus.

“The (solution) framework is clear, based on all previous decisions of the Security Council,” Mitsotakis said.

He added that the solution can be found only in the context of the bi-zonal bi-communal federation, and a single sovereignty, citizenship, and international representation. “And of course, with the withdrawal of the occupation troops, but also the abolition of the anachronistic framework of guarantees.”

The Greek premier said that it was important for parties “to be able to determine in these difficult discussions what is the starting point.” He added that this was what he would discuss with Anastasiades.

“We will be given the opportunity to coordinate our actions in view of these demanding discussions to which we always come with a goodwill to find a solution that will be just, functional and sustainable, for the benefit of all Cypriots, Greek Cypriots and Turkish Cypriots,” he said.

Anastasiades said the solution parameters were set at the Berlin meeting in 2019, agreed with the then Turkish Cypriot leader Mustafa Akinci in the UN secretary-general’s presence.

“Our effort is not to usurp anyone’s rights. We are trying to find a way to make both communities feel safe. The human rights of both communities, of the entire Cypriot people, must be guaranteed,” he said.

He added that the aim is the evolution of the Republic of Cyprus to create a functional and viable state, rid of guarantees and occupation troops, “any foreign troops and especially away from dependencies of any third parties.”  He added that, in this respect, Nicosia’s and Athens’ positions coincide.

He also said that Greece’s role in the negotiations will be different from the Greek Cypriot side that will discuss details regarding the internal structure of the state, but that Athens will have an important role to play on the issue of security, guarantees, and so on, as well as in respecting the resolutions of the UN.

How to make a DIY, hands-free stand for your smartphone