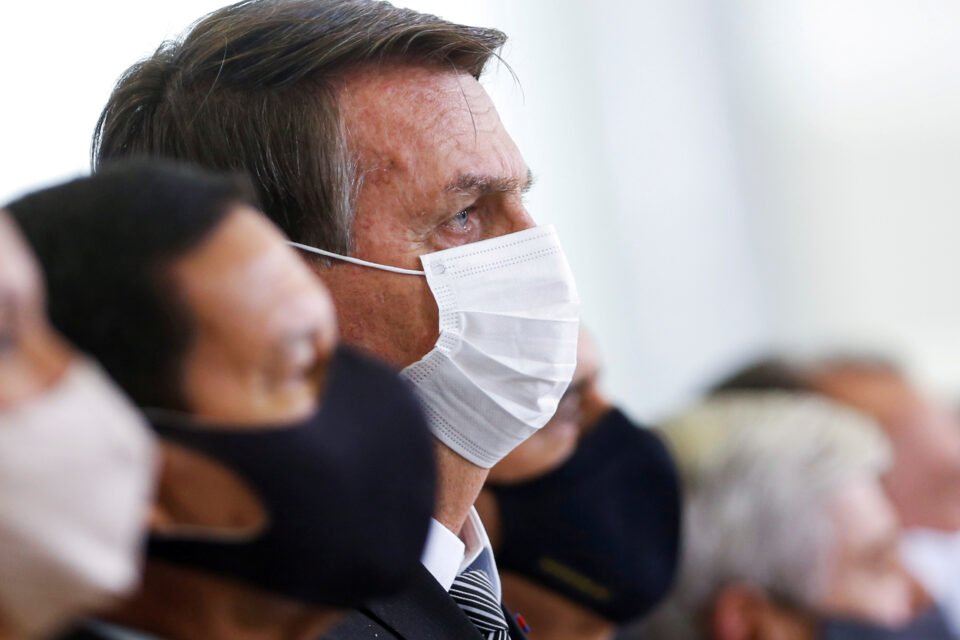 Brazil's President Jair Bolsonaro attends a promotion ceremony for generals of the armed forces, at the Planalto Palace in Brasilia, Brazil April 8

‘Rounding into the home stretch, it’s Italy by a full length, then the United Kingdom, with the United States and Brazil neck and neck…. No, wait. Brazil is making its move. It’s coming up on the outside….’

Is it disrespectful to portray the performance of the leading Covid-stricken countries as a horse-race in which the winner will be the major country with the worst death-rate per million citizens? If so, I apologise, but it certainly looks like that.

Italy led at first, was subsequently overtaken by practically everybody else, and then did a last-quarter sprint that put it back out in front again. But Brazil, the dark horse, overtook the United States on Sunday (Brazil 1,758 deaths per million, US 1,750 per million), and it may catch up with the UK next week. After that only Italy stands in the way of Brazil winning the Covid Booby Prize.

I’m not deliberately neglecting the achievements of the small countries of south-eastern Europe (Bosnia, Bulgaria, the Czech Republic, Hungary, Montenegro, North Macedonia, Slovakia and Slovenia) that occupy eight of the ten top places on the death-rate list. They’re just small, and nobody had particularly high expectations for them.

Nor am I playing this ranking game just to point out that the worst-performing of the major countries all had populists in change, at least until recently (Donald Trump in the US, Jair Bolsonaro in Brazil, Boris Johnson in the UK), except Italy, which had practically no government at all. I’m doing it because Brazil looks like it will win the Booby Prize.

The pandemic is probably going to end the political career of Jair Bolsonaro, Brazil’s egregious president. In fact, his equally unpleasant son Eduardo is already dreaming of a last stand in the Trumpian style. He recently criticised the would-be heroes who stormed the Capitol in Washington on January 6 for being timid and incompetent.

“If they had been organised,” said Eduardo Bolsonaro (who heads the Foreign Affairs Committee in Brazil’s House of Deputies), “they would have taken the Capitol and… killed all the police inside or the congressmen they all hate.” And Eduardo’s father, the president, Jair has gone full Donald, trying to justify a coup in advance by insisting that next year’s election will be rigged against him.

Like Trump, however, Bolsonaro cannot really rely on the support of his nation’s senior military officers to save his bacon if he loses the election. He has just replaced all of Brazil’s military heads of service with generals who he thinks are more loyal, but the genuinely fascist officers who might actually back him in a coup are almost all of much lower rank.

If Bolsonaro has to depend on winning the popular vote next year, however, his chances of a second term are shrinking by the day. The latest opinion poll (mid-April) finds 55 per cent of the voters see his presidency as ‘terrible’, while only 26 per cent think it is ‘good’ or ‘excellent’. What has undone Bolsonaro, just like his hero Trump, is Covid-19.

The pandemic is so bad in Brazil now that most hospitals are rationing care, turning away Covid-stricken people whose age or underlying conditions make them less likely to survive and saving scarce beds and oxygen for those with a better chance.

The death-rate has been truly shocking. Most days last week it was in the high three thousands per day, which is about a third of the world total in a country with only 2.5 per cent of the world’s people.

It’s especially horrifying in a middle-income country with a free national health service which, although it is underfunded, normally provides reasonably good care. Only 11 per cent of the population have received at least one dose of a vaccine, and the latest forecast is for half a million deaths by July.

Even Bolsonaro sometimes wears a mask now, although he continues to take legal action against states that impose stronger anti-pandemic measures like stay-at-home orders. He is a prisoner of his own ideology, even when it is clearly hurting his popular support. And to make matters worse for him, ‘Lula’ is out of jail and free to run against him next year.

Brazil was never more prosperous, especially for the less privileged half of the population, than during Luiz Inacio ‘Lula’ da Silva’s two terms as president in 2003-2011. He then withdrew because of the two-consecutive-term limit, but he would have been free to run against Bolsonaro in 2018 – and he would have won – if he had not been in jail by then.

The judge who sent him to jail later became a member of Bolsonaro’s cabinet, but the Supreme Court has now annulled Lula’s corruption convictions and he’s free to run for president in 2022. Nobody knows how many Brazilians will have died needlessly by then, but probably enough to write Bolsonaro’s political epitaph.