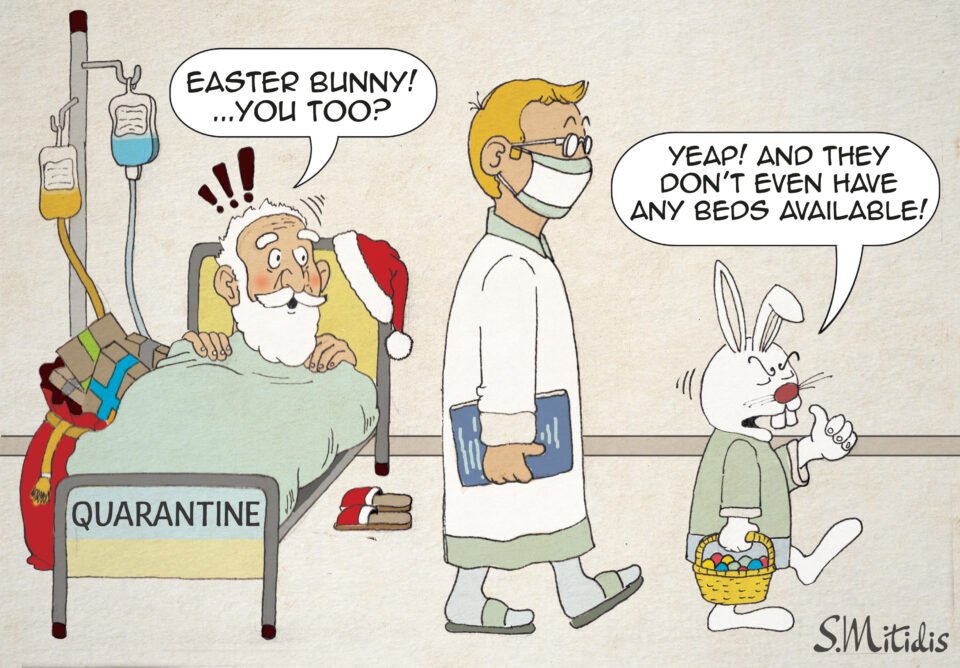 IN KEEPING with the traditions of authoritarianism, supreme leader Prez Nik overruled his government’s decree prohibiting people from attending church services during Holy Week just a few hours after it was announced and published in the Official Gazette of the police state, together with all other lockdown rules.

We can only speculate that the specific decree was declared null and void by our Fuhrer to appease the country’s alternative authority, the Church. Rather than having the priests defying the state authority and ignoring the decree, Nik decided it would be easier to cancel it. He would get some stick but it would be nothing compared to having the priests and churchgoing fanatics on his case.

As Orwell wrote, “some animals are more equal than others”, even though in our case the animals were not pigs but churchgoers, who are the only people allowed to congregate in public places, both inside and outside. We are banned from going for a walk on a nature trail, on which we are likely to encounter nobody, but we can go into a church or gather in its grounds where there will dozens of people.

According to the presidential diktat, up to 50 people will be allowed into church as long as they provide a certificate that they have been vaccinated with at least the first dose a minimum of three weeks earlier. No restrictions are placed on the faithful that follow the service outside the church. They could have tested positive in the morning but as long as they wear a face mask and keep their distance they are allowed to attend.

THE CONCESSIONS made by Nik were not enough for the Church hierarchy. On Saturday the dour bishop Georgios of Paphos repeated the views of Archbishop Chrys, declaring that “we consider the restrictions on Holy Week services do not apply to us because we have in place all the protective measures for our people inside the churches so the services will be held as normal.”

So, there will be no security guard at the Church entrance to check whether the faithful entering have a vaccination certificate? Bishop Georgios avoided saying this directly but it was implied from his assertion that the restrictions did not apply to the churches. Nik is smart enough to have known no church would ask for a vaccination certificate but he had to say it to justify his decision to exempt the faithful from the lockdown rules.

I would not be surprised if the church courtyards are packed with people, including many non-believers, desperate for a little social interaction, which is as much of a human need as believing in God. Of course, there could be a new decree requiring people going to the Holy Week services provide a state certificate that they believe in God.

NON-BELIEVERS, meanwhile, will be under house arrest again for two weeks, allowed out just once a day for a maximum of three hours. The decree specified that ‘reasonable amount of time’ is ‘no longer than three hours’.

The police state has taken away our right to two SMS messages per day for the next two weeks and nobody should be surprised if it is kept in force long after the lockdown ends. They may as well lock us up and throw away the key.

Of course the single SMS per day does not apply to churchgoers, because during Holy Week there are services morning and evening. And as some Holy Week services last longer than three hours, churchgoers are also entitled to ignore the ‘reasonable amount of time’ stipulation as well.

In the end, the only people benefiting from the latest lockdown, apart from the devout, are the public parasites who will be able not to work from home. Only 20 per cent of public parasites at non-essential government offices will be required to show up for work for the next two weeks. Teaching unions could demand being given more days off as they would have been on holiday during the two weeks of the lockdown anyway. 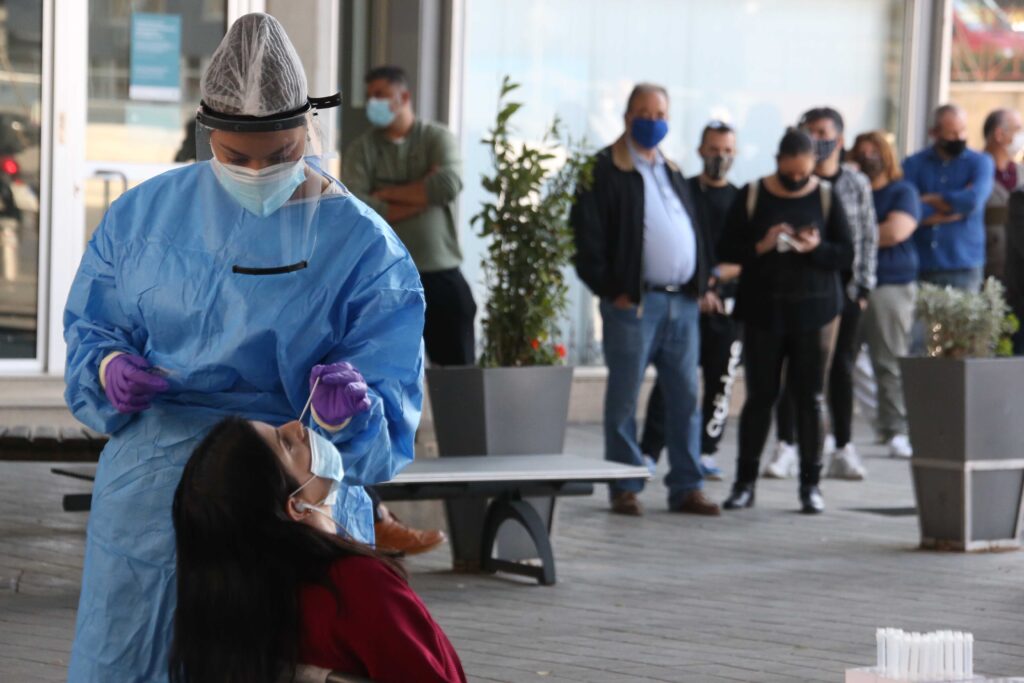 HOW IRONIC that two days after a letter signed by two ministers (foreign affairs and communications) and the deputy minister for tourism was sent to our ‘tourism partners’ informing them that the Covid-19 situation in Kyproulla was under control, the government imposed a full lockdown.

“In addition to our successful vaccination campaign, Cyprus is one of the most successful countries in Europe at controlling the spread of the disease, through consistent, widespread testing of the population,” said the letter.

We are controlling the spread of the disease so successfully we have one of the highest numbers of cases per 100,000 population in Europe and our government has decided to put the country into full lockdown, except the churches in the hope it will boost religious tourism.

THE MANAGER of a big hotel in Larnaca was seething when he heard about the lockdown. “I have 27 rooms booked for tourists arriving from Russia on Saturday and am expecting more arrivals in the week, so what do I tell them,” he asked during a brief visit to our establishment.

“Should I inform them that they are under house arrest and can only leave the hotel once a day? And where would they go when they exercise their right to leave the hotel for three hours? Everything is closed, something they had not been warned about when they booked their holiday.”

They should just be happy they chose one of the most successful countries in Europe at controlling the spread of the disease for their holiday.

THE INTENSIVE rapid testing programme, which the scientific dream team assured us would help control the spread of the disease had an unexpected result. It placed Cyprus in the ‘red category’ of places to visit because of the high number of positive cases it produced.

Our hacks accompanying Prez Nik to Geneva to cover the informal five-party conference have realised what it means to visit Switzerland from a ‘red category’ country. Visitors from red category countries are obliged to isolate for 10 days when they arrive, but as a special favour the hacks will be locked up in their hotel prohibited from leaving at any time.

The hotel will provide them with a conference room at which they will be visited by the Cypriot politicians, who will be staying at a more expensive hotel, for briefings. There was a possibility that the UN would provide a room for them at the UN building to do their work.

MUSTAFA Akinci was less than flattering about Prez Nik’s role in the collapse of the talks at Crans Montana during an internet discussion organised by the Opek think tank. Speaking about the last supper in Crans Montana he quoted what was said about Nik’s behaviour.

The EU’s High Representative Federica Mogherini during the supper said “Anastasiades does not want to proceed,” while the UN Special Envoy Espen Barth Eide said “he is constantly moving the goalposts.” Akinci also said “we went to the supper to reach agreement and Anastasiades had his suitcases ready to leave.”

The Turkish Cypriot politician also confirmed that our Nik had actually spoken to Turkey’s foreign minister Cavusoglu about two states. He warned Cavusoglu, he said, not to believe Anastasiades as this was a tactical move so he could leave the conference and maintain the status quo. Prez Nik has flatly denied ever talking to Cavusoglu about two states, so either Cavusoglu lied to Akinci about it or Akinci is lying, because Nik never lies.

I SEE THE ubiquitous Odysseas – the Odyt office to be more precise – was included in one of the amendments for the law allowing the state to guarantee bank loans. It was a triumph for Diko, which had threatened not pass the bill without the Odyt office participating in the committee that would monitor the implementation of the law.

The committee would be made up of the accountant-general or her deputy as chairperson, a finance ministry officer and two central bank representatives, but because Diko does not trust these officials to do their job properly, it introduced the amendment stipulating that Odysseas will supervise them. The Odyt office has been given observer status by the law.

Shouldn’t other state officials also supervise the committee? For instance, the Commissioner for Data Protection should also observe to ensure against infringements of the personal data of loan applicants, the ombudswoman could ensure human rights were not violated, and the Financial Commissioner could monitor the quality of the loans. And how about an epidemiologist observer to ensure the loans were given only to companies that complied with the Covid decrees?

SPEAKING of loans, the House of Representatives, which had its final session on Thursday, has become an agency promoting the non-payment of loans and protecting all debt defaulters.

The government was forced to withdraw a law on the courts that would have speeded up the resolving of differences between delinquent debtors and banks or asset companies after deputies made amendments that would in effect suspend the foreclosures procedures. As Solidarity said the amendments were aimed at making “justice operate in favour of debtors and not ensure express foreclosures.”

On Thursday however the parties voted through a law freezing foreclosures on mortgaged houses, valued up to €500,000, until the end of July. For deputies, people that do not repay their loans are victims of the banks that must be protected. This philosophy was also incorporated as an amendment in the law on state guarantees.

The amendment gave the power to the finance minister to tell the banks to suspend the payment of loan instalments by borrowers for a year. You would expect deputies to come up with ways to help borrowers not repay the loans, especially as it is the taxpayer that will pick up the bill.

I HAD intended to write a celebratory piece about Akel’s 80th anniversary but I have run out of space so my tribute will have to wait until after Easter. Speaking of anniversaries, the Coffeeshop completed 30 years of life on April 21, sharing its birthday with the Queen and the coup of the colonels in Greece.

Freedom of religion and judicial independence in the north

Our View: Geneva meeting unlikely to be genuine ‘last chance’ for a deal