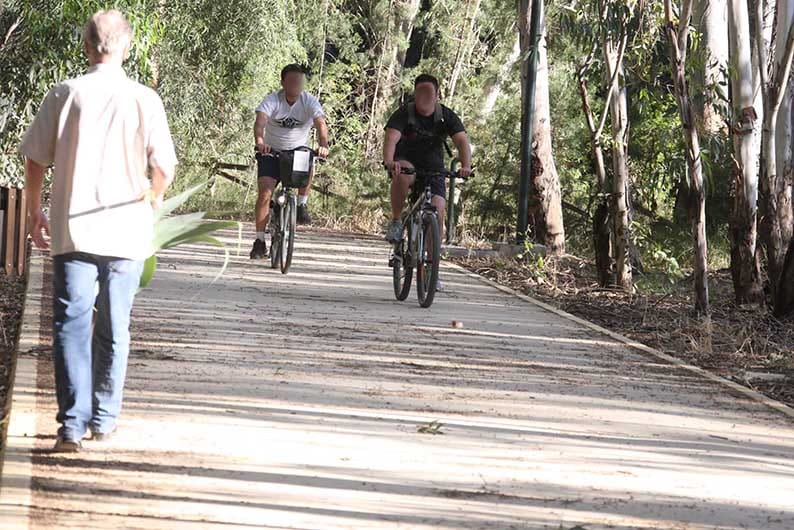 The Pedieos park is popular with joggers cyclists and walkers

The Pedieos linear path is one of the greatest achievements of local government in the Nicosia district – a nature sanctuary that stretches for miles through the urban concrete. Its traffic has soared during the lockdowns and pandemic-related restrictions on movement, although it was out of bounds during the first lockdown of last year. Since it reopened last May, it has been heaving with people all hours of the day.

There is, however, one thing about the linear park that needs to be tackled, even though we have not heard many complaints. Allowing cyclists to use the entire length of the path, that runs along the riverbed, from Lakatamia all the way to the old Nicosia general hospital, is a bad decision and shows scant regard for the rights of pedestrians and joggers.

Since it reopened, especially during the second lockdown, it became very popular with people that wanted to get out of the house and go for a walk in a natural setting without having to wear a face mask as this qualified as physical exercise. But apart from walkers, the path also attracted cyclists, some in Tour de France outfits, others as part of a nuclear family on a bike outing, all of them making those on foot feel they were in the way.

A large stretch of the path has separate lanes, keeping pedestrians out of the path of cyclists, but near the presidential palace the lanes merge into one and this is where the problems begin. After this point, the experience of a relaxing walk in nature is completely ruined because you constantly have to get out of the way of the cyclists, many moving in pairs or fours in the case of the cycling families.

Perish the thought of wearing headphones while walking, because you will not hear the cyclists approaching behind you, or, alternatively, you will spend the walk looking behind you all the time. It is not even as if the path is wide enough for everyone – pedestrians, dogs and bikes. In fact some sections of the single lane are very narrow and those on foot have to get off the path to make way for those on bikes.

We do not know who is in charge of the path. It starts in Lakatamia municipality, goes through all of Strovolos and ends in Nicosia so which municipality has the authority to ban bicycles from the part of the path that is a single lane? They should take a joint decision, to ban bicycles from this part of the path, as a show of respect to disenfranchised pedestrians, who always have to make way. The Pedieos linear path must be the one place in Nicosia in which the pedestrian is king, and where they can walk freely without having to make way for anyone.

Coronavirus: tourists ‘living it up’ sparks ire of locked-down residents