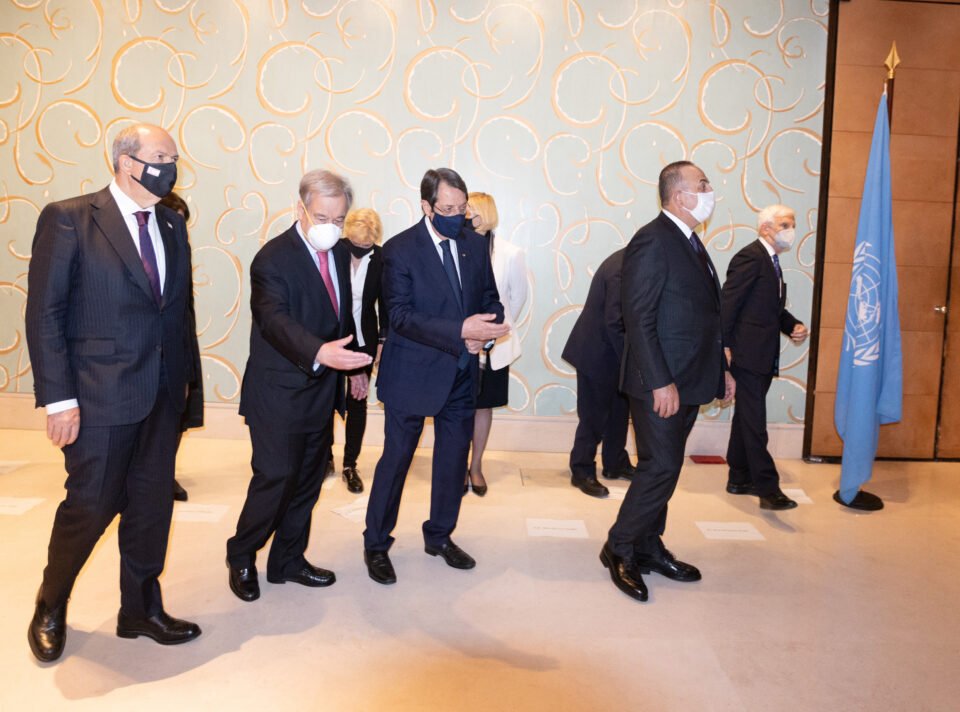 The main players at the talks in Geneva last month

The third and final day of the informal summit on the Cyprus issue will start with a plenary session in the morning following news that no progress was achieved so far.

According to sources, UN Secretary-Antonio Guterres called last night on all five parties  – the two community leaders Nicos Anastasiades and Ersin Tatar and the foreign ministers of guarantors Greece, Turkey and the UK – to reflect on the situation and get back to him in the morning with the final positions so that he can decide what to do next.

This was during the extraordinary second plenary he convened on Wednesday evening. He also called off bilateral meetings that were scheduled for Thursday.

The issue appears not to be with any particular person, but the position itself, as Tatar wishes to instead focus on his six-point proposal.

His proposal, submitted in writing, calls for recognition by the UN Security Council of the northern part of Cyprus as an independent state which will then negotiate with the other state on the island, the Republic of Cyprus, “their future relationship.”

According to sources, Guterres had suggested that the special envoy would be assisted by five negotiators, representatives of each of the five parties (the two communities and the three guarantors).

The UN chief had also told the parties there were three options: appointment of the special envoy, a new informal summit in a couple of months or him returning his mandate.

Guterres who, sources said this week stressed his commitment about helping achieving progress on the Cyprus issue, reportedly said he was not in favour of the last two options and called on the parties to reflect on the situation and get back to him.

Study skills for kids: how to take effective notes