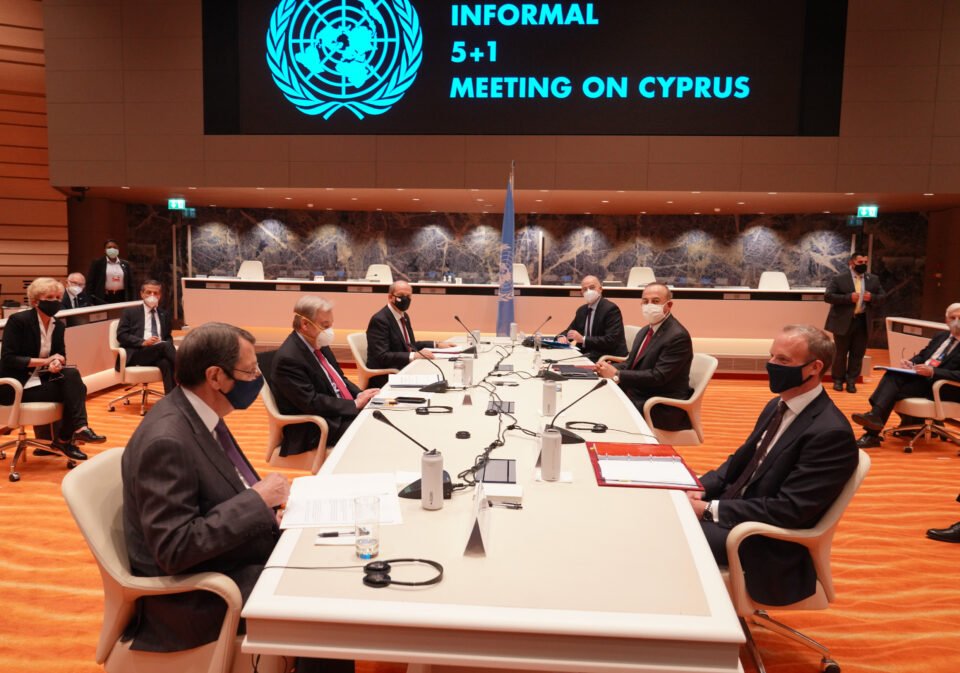 The two leaders, the UN Secretary-General Antonio Guterres and the foreign ministers of Greece, Turkey and the UK at the plenary session on Wednesday morning

After a very long second day at the Geneva talks on Wednesday there were strong signs that the process was unravelling fast, after the UN secretary-general called off any more bilateral meetings, sources said.

They added that no developments were reached on Wednesday and Antonio Guterres had called on all parties to reflect on their positions before presenting them at the plenary session scheduled for Thursday morning.

News that UN Secretary-General Antonio Guterres decided to convene a second, extraordinary plenary in the evening had raised hopes for some developments especially after it became apparent that the Turkish side would not go back down on its position on a two-state solution.

Speaking after that meeting had ended, President Nicos Anastasiades expressed his disappointment over the Turkish Cypriot side’s insistence on its call for recognition of the north as an independent state.

He said the Greek Cypriot side remains firm that there should be respect for the UN resolutions, the high-level agreements on Cyprus, the work that has been produced so far, and his joint declaration of November 25, 2019 with former Turkish Cypriot leader Mustafa Akinci.

Anastasiades said he was “very disappointed” by the Turkish Cypriots’ positions.

Earlier, during the scheduled plenary session in the morning, Turkish Cypriot leader Ersin Tatar, submitted in writing his six-point proposal that calls for recognition by the UN Security Council of the northern part of Cyprus as an independent state which will then negotiate with the other state on the island, the Republic of Cyprus, “their future relationship”.

Anastasiades said in the evening that the Greek Cypriot side would submit its own positions to Tatar’s suggestions “with scientific documentation and not only the political view of things”.

“I have told the secretary-general that our effort was to create a positive atmosphere, without provocation, without references to all the unacceptable things we heard,” Anastasiades said.

After a more than a one-hour second plenary, the two leaders and the foreign minister of guarantors Greece, Turkey and the UK went for a late dinner where sources said continued consultations had no breakthrough.

After the dinner, Anastasiades briefed the National Council.

Another plenary session was scheduled for Thursday morning, the last day of the summit.

While Tatar proposed talks between two sovereign states on the island, Anastasiades, after a long overview of the convergences achieved so far in the Cyprus problem process confirmed that the Greek Cypriot side’s proposals as submitted in Crans-Montana in 2017, are still on table.

Tatar, in his positions, said that once the Security Council adopts a resolution in which the equal international status and sovereign equality of the two sides is secured, the two states will negotiate, on a new basis, under the auspices of the UN secretary-general, on their future relationship and for an agreement on property, security and border adjustment, and relations with the EU.

He said that these negotiations will be supported by Turkey, Greece, and the UK and when appropriate, the EU as an observer. He also suggests the continuation of the system of guarantees arguing that the two states will mutually recognise each other, and the three guarantors will support this. Tatar also suggested that any agreement reached during these negotiations will be submitted for approval in separate referenda in the two states.

Anastasiades, on the other hand, during the first plenary session, confirmed that that the Greek Cypriot side’s proposals as submitted in Crans-Montana in 2017, were still up for discussion. According to sources, Anastasiades said in his own intervention at the plenary that he was not interested in engaging in a blame game but on focusing on the essence of the Cyprus problem.

He said it was important to reach an agreement that addresses the concerns of both communities through conditions of peaceful coexistence. He recalled that the sides had reached a historic compromise after the Turkish invasion on the evolvement of the internal structure of the Republic of Cyprus into a bizonal bicommunal federation. 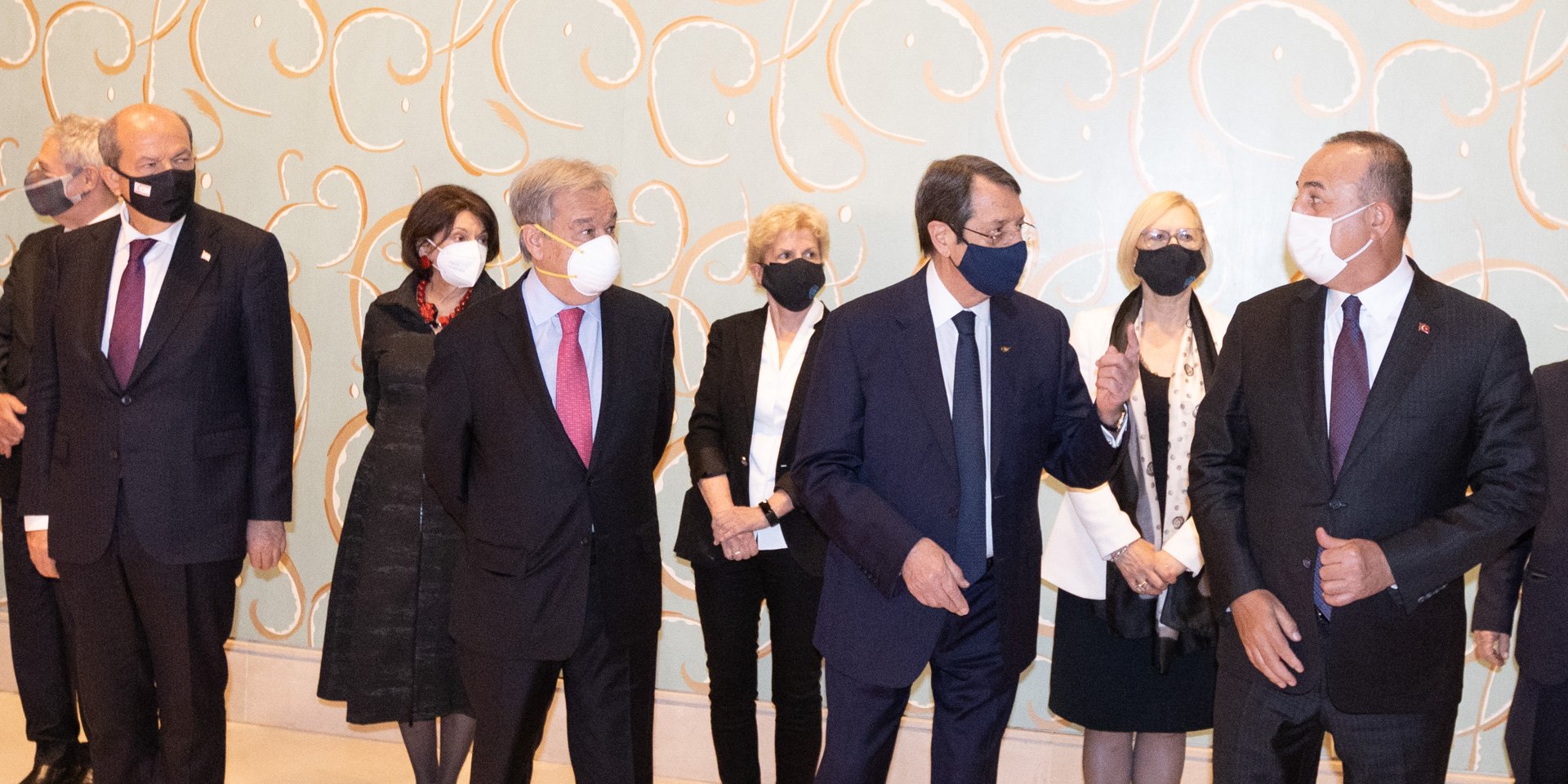 The president also said that the status quo is not in anyone’s interest. He reiterated his position that he does not deny the right of the Turkish Cypriots to a positive vote as long it is on issues that affect their community.

Anastasiades also said there are safeguards for both communities post-solution, through the ratification of the solution by the Security Council and the EU and the establishment of a council of emergencies and a friendship pact between Cyprus, Greece and Turkey.

He also said that all problems can be overcome through the convergences and the Guterres Framework. The president did not submit anything in writing.

Guterres held during the day separate meetings with Anastasiades and Tatar and the three foreign ministers to discuss their views.

Greek Foreign Minister Nikos Dendias reiterated his country’s wishes for the restart of the talks within a framework fully in line with the UN Charter, the relevant decisions of the UN Security Council for a bicommunal, bizonal federation as well as the European acquis.

He also said, according to diplomatic sources during the first plenary, that any solution should ensure the continued participation of Cyprus in decision-making within the EU, without external interference and called for the abolition of the “anachronistic” system of guarantees and full withdrawal of the Turkish occupying forces from the island.

His Turkish counterpart, Mevlut Cavusoglu, tweeted on several occasions throughout the day in favour of the two-state solution. After a meeting with UK Foreign Secretary Dominic Raab, he tweeted that the only realistic solution is negotiations between two states rather than two communities.

“Confirmed our full support to new solution vision of the Turkish Cypriot side,” he added which raised eyebrows as to the UK’s intentions.

Raab tweeted after the same meeting: “I urged flexibility on all sides to secure progress towards a just and lasting Cyprus settlement.”

There was no information on what the UK minister said during the morning plenary.

Raab also held separate meetings with Anastasiades and Dendias. He said his and Anastasiades’ was a “good meeting” and diplomatically added that “with trust and compromise, the parties can find a solution to  #CyprusSettlement that meets the objectives of all sides.”

Sources said Guterres told Anastasiades on Tuesday that he was committed to this process and he wanted a result. He said if there is no result, they will have to see what the next steps are.

Responding to talk about what happens in the case of an impasse, diplomatic sources said that Guterres will submit his report to the Security Council with his conclusions and will be waiting for guidance by them. Sources said this is standard procedure followed after all such summits, regardless of the results and that the UN secretary-general cannot decide on his own if his mandate will change and pursue a different form of solution.