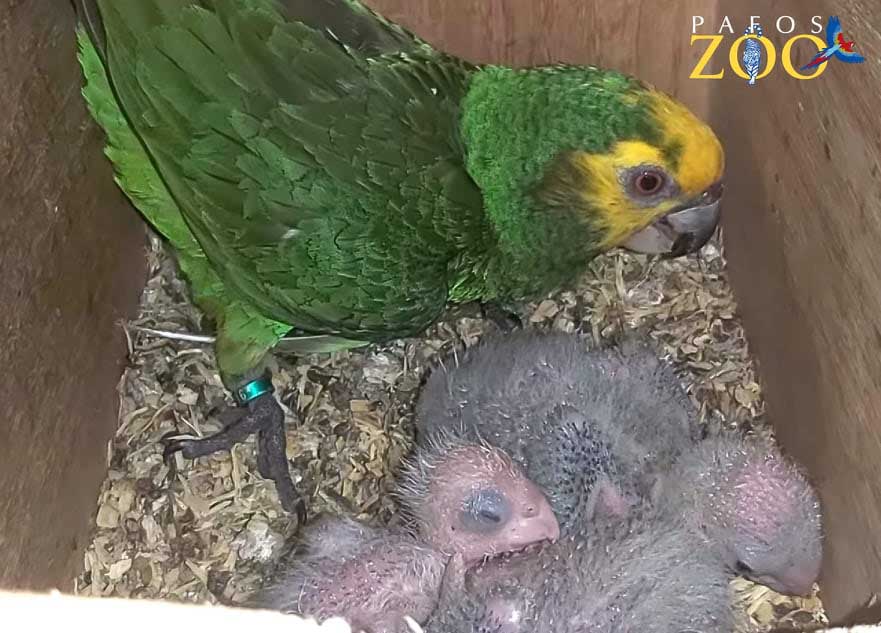 ‘Pafos Zoo’ has welcomed the successful breeding of a rare parrot.

In 2018, the zoo brought four pairs of the birds, ‘yellow-fronted parrots,’ (Poicephalus flavifrons) from Ethiopia in Africa with the hope that they would breed.

In 2020, one of the pairs produced two unfertilised eggs, so their habitat and diet were modified, the zoo’s Ioulios Christoforou told the Cyprus Mail.

“With these changes in their care we have now had a very good result, three beautiful, strong young babies,” he said.

Around one month ago, the chicks cries were heard from one of the breeding cages, the smallest, he said, but staff decided not to disturb the birds and give them privacy.

However, there was a small concern as to the mother’s heath and so a couple of days ago, Christoforou took a look and filmed a short video at the same time.

“The mother has adapted well and protected her chicks, she is a very good mother and it seems that she will raise the young herself with no help from us, which is great,” he said.

The chicks all look strong and healthy, he added.

These parrots are mostly green with a yellow head. Relatively little is known about this bird, especially in captivity, said Christoforou.

“They don’t really exist in collections or zoos, but there is a renewed interest in them.”

The birds are being fed the best quality food, a special seed mixture for African parrots, as well as fresh vegetables and fruit twice a day and a legume mixture which the zoo cooks to supply extra vitamins, such as calcium and iron, he said.

When spring comes around, all of the animals and birds are given extra boosts to their food as this is the time they usually breed, Christoforou said.

The zoo has been facing difficult times due to the pandemic and has only been permitted to open for one month, which was last year, since they were forced to close in September due to the restrictions.

“We are hoping that we might be able to open on May 15, we will wait and see. It’s hard to survive as we can’t stop feeding or caring for the animals, especially now, as this is the peak of the year for them and breeding,” he said.

The zoo is hoping the good news will spread as they aim for their recently acquired African wild dogs, a male and two females, to breed in the future.

‘Pafos Zoo’ opened in 2003 and was created by Christos Christoforou. It sprung from his love of birds and wildlife and was originally going to house his private bird collection.

However, he decided to establish and open a zoo for the public to enjoy the animals and birds and it took around three years to build.  The zoo also aims to provide education and preserve wildlife species.

The zoo covers more than 100,000 square metres and is home to all sorts of animals and birds including: giraffes, monkeys, meerkats, crocodiles, kangaroos, wallabies, mouflon, white lions, tigers, bats, camels, donkeys and many species of birds.