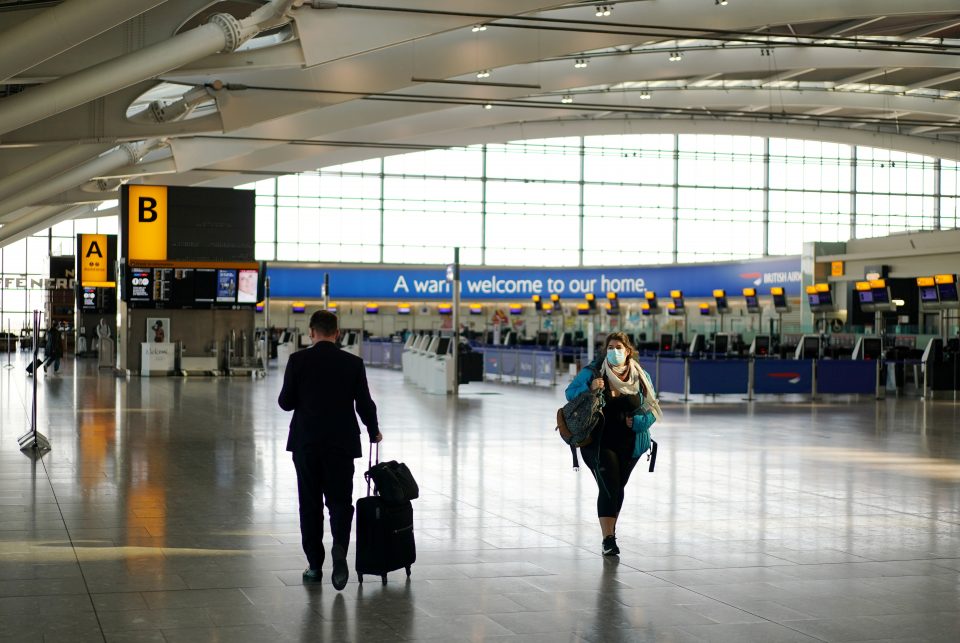 A near empty Heathrow check-in area

Britain on Friday announced that just 12 countries qualified for its ‘green’ travel list, with Cyprus being placed in the ‘amber’ category.

The tourism industry in Cyprus is set for another major blow as it will miss out, for the time being, on the big-spending Britons.

Britain has long been the strongest market and source of tourists for Cyprus, as seen in 2018 when Britons made up 30 per cent of the 3,938,625 visitors for that year – while Russia accounted for 9.4 per cent and Israel 8.7 per cent.

Three countries – Turkey, the Maldives and Nepal – were added to the ‘red’ list.

Those on neither the red nor green list, most countries, have been placed in the amber list – which the British government has “strongly advised people not to travel to”.

Britons that do travel to amber countries – which right now includes Cyprus – will incur the requirement for 10 days of self-isolation on return and to take two PCR tests.

“This was mostly expected as the cases and the numbers generally in Cyprus remain quite high,” Lakis Avraamides, of the Famagusta Tourism Board, told the Cyprus Mail on Friday night.

“Perhaps with the ‘safetypass’ which is being introduced we can lower the numbers, but those three weeks until the categories are revised is a lost three weeks for us – and there’s no certainty we will be ‘green’,” he said.

There has been some hope that the Russian and Israeli market can partially sustain the battered local tourism market.

Despite the two-week lockdown, which ends on Monday, Russian and Israeli tourists travelled to Cyprus – staying in few dozen hotels across the Republic.

“We hope that they can keep arriving at the numbers we are seeing, and a rise of course, but no; that will not cover the hole left by the British market,” Avraamides told us.

Britain has promised to reassess its travel plans before June 28 and said that the allocation of countries will be reviewed every three weeks.

Green list travel will involve people taking two Covid-19 tests, one before arrival back into the UK and one within two days of returning.

Airlines and travel companies have complained that the high cost of tests – at around £100 each (€115) – will dampen demand, but testing prices are falling as competition picks up.

The decision was not wholly unexpected as Cyprus has by far the highest number of cases per 100,000 in the EU – with 1145, according to the ECDC’s weekly report, published on May 6.

But Cyprus’ also has the second highest testing rate in the EU, as it carries out about 50,000 rapid tests a day – which has led some senior Cypriot officials to say that the positivity rate should be factored in.

The British government on Friday also warned that queues at airports are expected to be very long and time-consuming, as additional health checks will be carried out.

“Today marks the first step in our cautious return to international travel, with measures designed above all else to protect public health and ensure we don’t throw away the hard-fought gains we’ve all strived to earn this year,” UK Transport Minister Grant Shapps said.

The travel industry had argued that Britain’s rapid vaccination programme should enable the country to open up more quickly but the government has prioritised efforts to prevent variances of the coronavirus from entering the country.

Shapps told the media that Britain had managed to create a “fortress against the virus” and did not want to undermine the sacrifices people have made towards that effort.

He also said the list is not curated to think about “where people want to lie on beaches” and then twist the science to fit.

He says that would “betray what everyone has gone through over the last year”.

Shapps says he thinks we will gradually see an opening up of travel but “we just need to give other places the chance to catch up”.