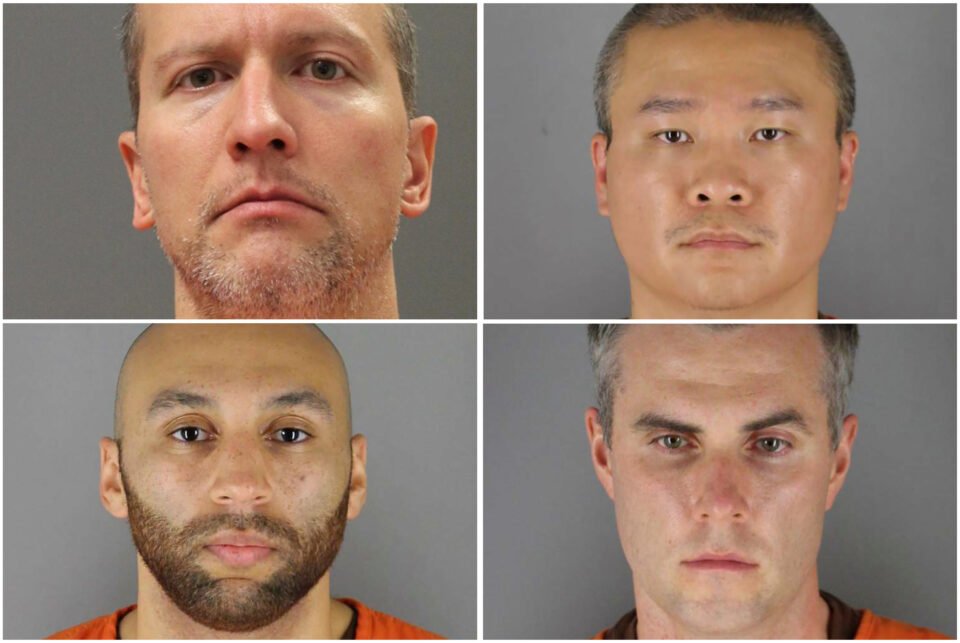 Four former Minneapolis police officers face federal civil rights charges for their role in the arrest and murder of George Floyd, according to court documents unsealed on Friday, showing the Justice Department’s tougher stance in such cases.

A federal grand jury in Minneapolis on Thursday issued a three-count indictment charging Derek Chauvin – the white former officer convicted in Minnesota state court of murdering Floyd – and three fellow former officers of violating his constitutional rights, including his right to have his medical needs attended to.

“The defendants saw George Floyd lying on the ground in clear need of medical care, and willfully failed to aid Floyd,” the indictment says.

Attorneys for the four men did not respond to messages seeking comment on the charges.

Thao, Kueng and Lane appeared with their lawyers in federal court in Minneapolis on Friday by video. All three were released on $25,000 bond. Chauvin, who is awaiting a June 25 sentencing hearing on his state convictions, remains in custody.

In a separate federal indictment unsealed on Friday, Chauvin was also charged with violating the rights of a 14-year-old boy during an arrest in September 2017. Chauvin is accused of holding the teen by the neck and hitting him with a flashlight.

The charges were the latest sign the Department of Justice under new Democratic President Joe Biden is taking a harder line against police abuses, a role that civil rights advocates say the department neglected during Republican Donald Trump’s administration.

In a confrontation captured on video, Chauvin pushed his knee into Floyd’s neck for more than nine minutes on May 25, 2020, as he and the three other officers arrested the 46-year-old Black man. Floyd, who was in handcuffs, had been accused of using a fake $20 bill to buy cigarettes at a grocery store.

His death prompted protests against racism and police brutality last year in many cities across the United States and around the world, and reinvigorated the Black Lives Matter movement.

Chauvin was convicted of state murder charges last month. His lawyers on Tuesday requested a new trial, saying there was prosecutorial and jury misconduct and errors of law at trial and that the verdict was contrary to the law.

The federal indictment against the four former officers charged them with depriving Floyd of his liberty and showing “deliberate indifference to his serious medical needs.”

Thao, Kueng and Lane – all of whom were fired and arrested days after Floyd’s death – also face state charges at a trial set for Aug. 23 that they aided and abetted the second-degree murder and second-degree manslaughter of Floyd.

U.S. Attorney General Merrick Garland has prioritized cracking down on police misconduct since being confirmed as the nation’s top law enforcement official in March. He has launched investigations into policing practices in Minneapolis and Louisville, Kentucky, where Breonna Taylor, 26, was shot to death by police in her home during a botched raid in March 2020.

“The indictments, while certainly not convictions, send an important message to the public that the legal system does provide avenues of recourse for the actions the former officers took that led to the death of Floyd,” said Jessica Levinson, a professor at Loyola Law School in Los Angeles.

The former officers were charged under a federal statute that provides for a maximum sentence of 10 years in prison, but are likely to face less severe sentences if convicted.

The attorneys representing Floyd’s family said in a statement that they are “encouraged by these charges and eager to see continued justice in this historic case that will impact Black citizens and all Americans for generations to come.”

“It is a reminder, as was the verdict in the Chauvin case just a few weeks ago, that there is still more that needs to be done,” Psaki said at a news briefing. “It is a reminder of the need to put police reform in place.”