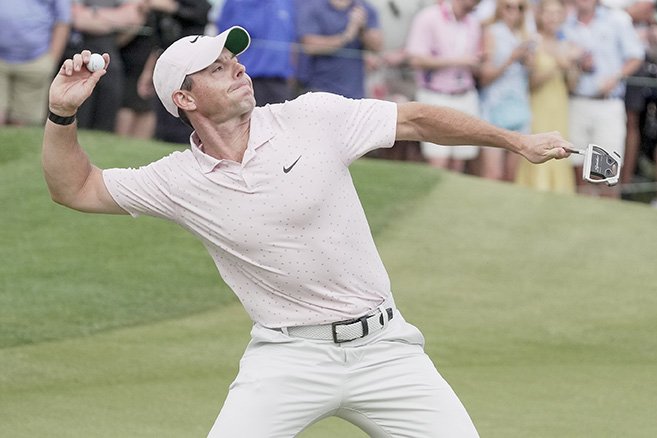 Rory McIlroy tosses his ball in celebration on the 18th green

Rory McIlroy shot 3-under-par 68 to win his first PGA tournament in more than 18 months on Sunday, finishing at 10-under 274 in capturing the Wells Fargo Championship at Quail Hollow Country Club in Charlotte, N.C.

McIlroy finished one shot ahead of Abraham Ancer, who shot a 5-under 66.

McIlroy overtook 54-hold leader Keith Mitchell, who shot 72 and finished tied for third with Viktor Hovland (67) at 8-under par. Gary Woodland, the 2019 U.S. Open champion, rounded out the top-five at 7 under after carding a 71.

The victory is the first for the Northern Irishman since 2019, marking the second-longest drought of his career. It is his 19th career tournament win and third at the Wells Fargo, which was the site of his first victory back in 2010.

McIlroy entered the day in second place, but birdied No. 3 and 7 on his way out, and came back in with birdies on 14 and 15 to gain the upper hand. He was in comfortable position by the 18th when he carded his only bogey of the day.

“It’s never easy. It’s never easy to win out here,” he said. “It’s felt like a long time since that victory in China back in 2019. The world is a completely different place than it is today — everyone getting through a pandemic … life’s changed a lot for me being a dad, winning on Mother’s Day, thinking of Erica (his wife, Erica Stoll), thinking of my mom back home. It just feels awesome.”

In 10 career starts at the Wells Fargo, the 32-year-old McIlroy has three wins, a share of second, and eight top-10 finishes.

“This is one of my favorite places in the world and to break the drought and to win here again, that’s awesome,” he said.

McIlroy’s last victory was in November, 2019, at the WGC-HSBC Champions in Shanghai.

He earned $1.458 million for Sunday’s victory in the $8.1-million tournament, which was played in front of significant numbers of spectators, as 30 percent capacity was allowed in Charlotte.

“It’s just awesome to play in front of these people again,” McIlroy said. “You know when we came back from the pandemic, I thought I’d enjoy the peace and quiet a little bit, but I soon realized that to bring the best out of myself I needed this.

“I feel off the energy so much — maybe here more so than anywhere else just because it’s the first place I’ve won three times, so the crowd has just been awesome all week and they really carried me through today.”

Mitchell had extended his overnight lead to three shots with a birdie on the first hole, but then bogeyed No. 5 and 6, opening the door for McIlroy and Woodland, who strode to the lead. Woodland eventually fell back due to bogeys on the 12th and 13th holes, while McIlroy didn’t falter until the tournament was in hand.

Coronavirus: Slovakia gets upgrade from Red to Orange