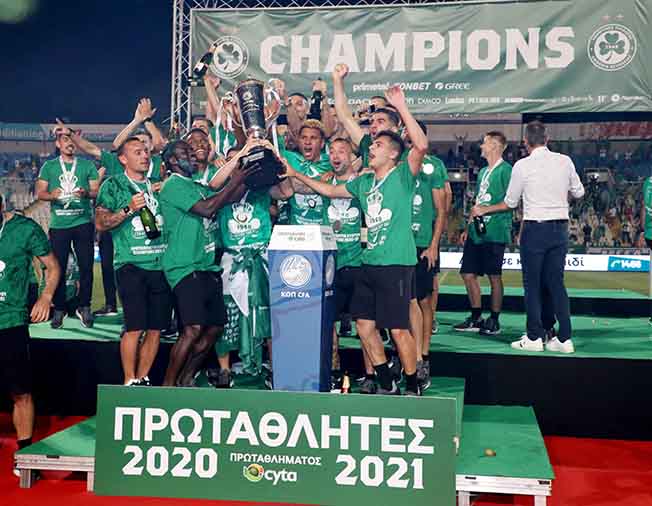 Omonia were presented with the championship trophy on Monday night at the GSP stadium in Nicosia as the Greens ended the season with a 1-1 draw against Apollon.

The match had a festive feel to it, with about 3,400 partying fans allowed into the stadium (15% of the capacity).

After a goalless first half, the champions went ahead through Kakoullis in the 62nd minute, but Apollon equalised with a penalty by Matei six minutes from time.

After 36 games, Omonia finished in first place with 79 points, followed by Apollon with 74. AEL are third with 68 points, with Anorthosis fourth with 57 points. AEK finished fifth with 40 points and in sixth are Olympiacos with 47 points.

Omonia will now play in the Champions League qualifiers, Apollon and AEL in the Europa League qualifiers, while the island’s fourth representative in European competitions will be the winners of the Coca-Cola Cup final between Anorthosis and Olympiakos.

There was one other game on Monday night, with Apoel ending a tough season on a high note with a 6-1 thrashing of Karmiotissa.