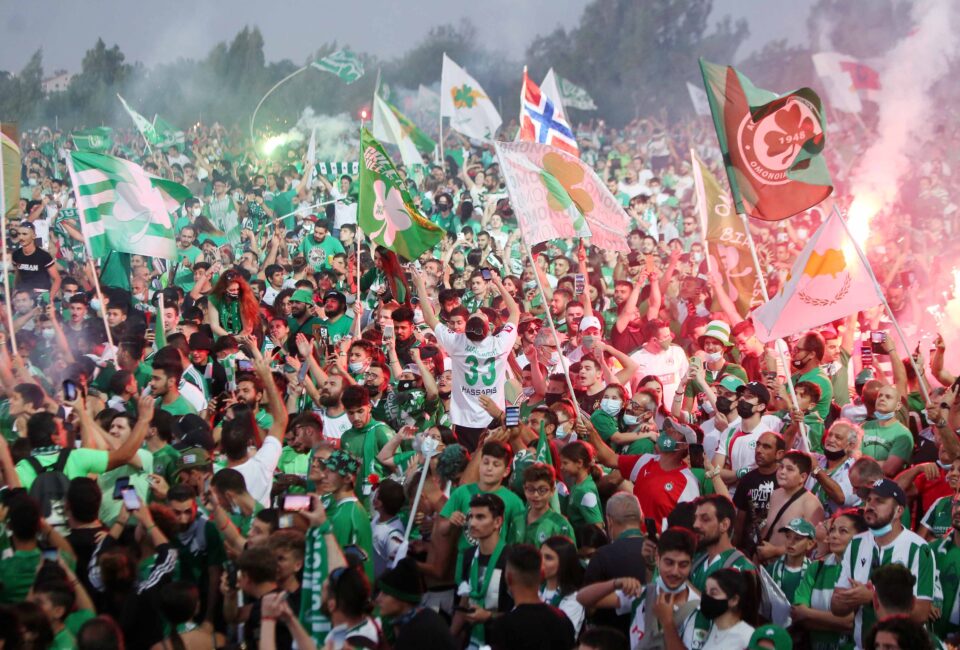 Thousands of Nicosia side Omonia fans defied health and safety protocols and the danger from the coronavirus, as they celebrated winning the championship on Monday

Thousands of Nicosia side Omonia fans defied health and safety protocols and the danger from the coronavirus, as they celebrated winning the championship on Monday, potentially jeopardising the improving epidemiological condition.

Police estimate that around 20,000 people took part in the celebrations at Omonia’s training ground in the Yeri area.

The fans lit flares and fireworks, sang and shouted slogans, but there was no physical distancing and most did not wear protective masks.

It was Omonia’s 21st championship, won after 11 turbulent years during which the popular club came close to bankruptcy.

Asked whether the government had a double standards approach, President Nicos Anastasiades said it was wrong that the measures were violated but showed understanding towards the fans’ sentiments.

Anastasiades said no one wanted, club included, for people to get out of line.

“But at the same time, let us consider the feelings of fans whose team wins after 11 years.”

The president said if the police had intervened there would have been trouble, something which no one wanted.

The plan was to allow around 3,000 supporters, or 15 per cent of the GSP stadium’s capacity to attend the club’s final game against Apollonas, which would have been followed by the award ceremony.

Those attending had to present a Safe Pass before entering. Meanwhile, a celebration had been organised at the club’s training ground, with tables set on one of the pitches for the supporters to sit and watch the game on a jumbo screen.

A Safe Pass was also needed to enter the grounds.

Though things appeared to go as planned at the stadium, the situation at the training ground did not seem to be under control, as thousands of people who also came from other towns, packed inside in anticipation of the team’s arrival.

Police said there was not much they could do, as an intervention would have probably led to violence.

Spokesman Christos Andreou said they expected around 4,000 people to attend the event at the training ground but in the end, over 20,000 turned up.

“We could not intervene. We do not want to reach the stage where police use violence to disperse crowds,” he told Alpha television.

He agreed the event was violating the law, adding that the force would decide on Tuesday on whether they would try to identify people who attended and issue them with fines.

Health Minister Constantinos Ioannou said the event could have effects on the island’s epidemiological situation.

“Unfortunately, the scenes we saw yesterday were very saddening,” he said. “Even with the low positivity rate we have at the moment, it is a given that some among so many thousands were positive.”

The health minister said such behaviour only served to make the authorities’ task harder, as they have been trying for months to convince people to comply with the measures and cooperate.