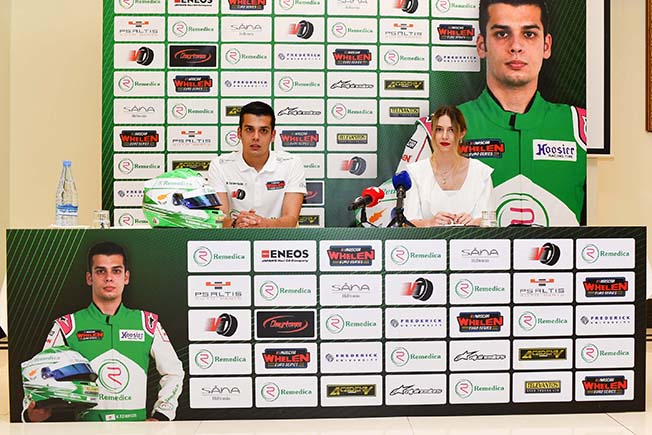 Vladimiros Tziortzis at the press conference ahead of the new season

Cypriot race driver Vladimiros Tziortzis will get his Nascar Whelen Euro Series campaign underway in Valencia on May 15-16.

In a press conference this week, the driver, who is backed by Cypriot pharmaceutical company REMEDICA, analysed his goals for 2021.

“The tests with the team went very well and I feel ready. The goal is to score as many points as possible in each round and race, as this is a championship that – as we saw last year – will be up for grabs up until the last turn. Last year was my first year and we were one of the claimants of the championship. I believe that this year we can do it,” says Tziortzis who competes in the EURONASCAR 2 category where last year he was fourth overall and the second-placed rookie.

Tziortzis competes with Academy Motorsport which is a development of Alex Caffi Motosports of the former Formula 1 driver Alessandro Caffi, with whom he participated last year. This year the team also includes the 1997 F1 World Champion Jacques Villeneuve.

“The presence of two former F1 drivers in the team is very important. Villeneuve and my team worked a lot during the test to adjust the car and it has already helped us a lot,” explains the Cypriot driver, who will race again this year with the No.1 on the doors of his Ford Mustang.

“We hope to inspire others.”

With a vision of a healthier world, REMEDICA is focusing a lot of its attention on sport.

”Vladimiros is an athlete who, with his presence and performance, manages to represent our country abroad with dignity,” Niovi Konstantinidou said on behalf of REMEDICA.

“We are very happy that our company has the honour to support such an athlete, who with his ethos, effort and skills is a shining example for young people. We hope that with our support we will be able to inspire other children and young people to get involved in sports.”

For the past two weeks, Tziortzis took part in pre-season tests, first at the Tazio Nuvolari track in Italy and then at the Circuit Fontenay Le Comte in France. In Italy, the first acquaintance with the team took place, and it was dedicated to the adjustments of the car and the tire pressures, while the weather gave the opportunity for tests in dry and wet conditions, a scene that prevailed during the two days in France.

In France, the car was prepared for Valencia as the track is quite similar to the Circuit Ricardo Tormo, while tests were performed in more extreme conditions, such as driving with strong winds or dry tyres (slicks) on a wet track. “We moved very fast all day, even when we tested our strength with few PRO drivers. “I am very happy and optimistic,” said Tziortzis.

This season includes seven rounds in Europe, each of which consists of two races. The opener will take place at the Circuit Ricardo Tormo in Valencia and the final – where the points are double – at the Autodromo di Vallelunga in Italy, in the autumn (dates have not been set yet).

* The date will be announced later.