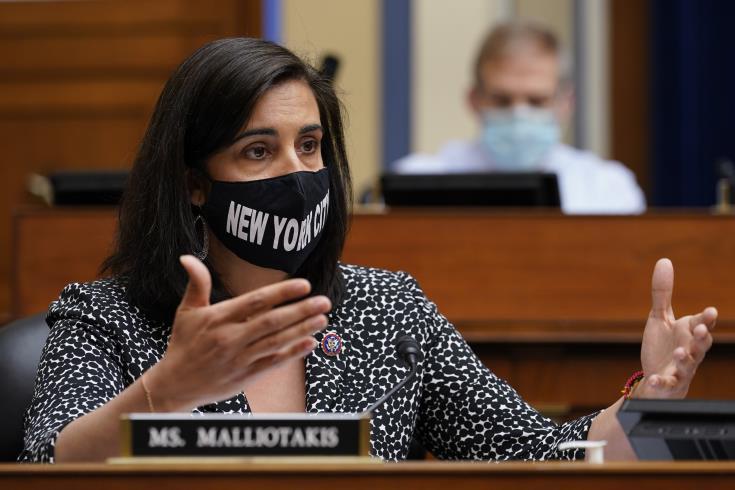 US Republican Congresswoman Nicole Malliotakis (NY-11) leads a bipartisan resolution calling on the Biden Administration to condemn Turkey for its illegal occupation of Cyprus and encourage the administration to make the resolution of this problem a top foreign policy priority.

“Turkey has been illegally occupying Cyprus for nearly 50 years, violating several international treaties, including the North Atlantic Treaty and the Treaty of Guarantee, which established and guaranteed Cyprus’ independence,” said Congresswoman Malliotakis in a written statement.

She adds that “as a Senator, President Biden strongly supported solving the Cyprus problem. We now urge his Administration to make this a top foreign policy priority by condemning Turkey’s illegal occupation of Cyprus and demand its cooperation in recovering the four American citizens who are missing as a result of its 1974 invasion.”

The call is also signed by Congressmen Gus Bilirakis (R-FL), Chris Smith (R-NJ), Brian Fitzpatrick (R-PA), Chris Pappas (D-NH) and Congresswoman Dina Titus (D-NV). Although bipartisan the call faces serious difficulty in securing the support of leading Democrat members of the House of Representatives, known for their strong support in the Cyprus issue, as Malliotakis is among the 140 who voted against the ratification of  the US election result, on January 6, and Democrats  avoid taking joint initiatives with these members.

Although the resolution makes reference to the two-state policy promoted for Cyprus by Turkish President Erdogan, which is contrary to the solution of a bizonal bicommunal federation, which is supported by the USA, there is no reference in the informal meeting 5+ 1 that took place in Geneva end of April.

Philip Christopher, President of the International Coordination Committee “Justice for Cyprus,” said that “the UN-sponsored informal meeting on the Cyprus issue came to an inconclusive end in Geneva on April 29, 2021,” adding that the meeting ended up “giving Turkey a platform to make aggressive demands for a two-state solution. The Republic of Cyprus is a full member of the United Nations, Council of Europe, European Union and a close reliable strategic partner of the United States. We call on the Biden Administration to condemn Turkey and exert all efforts to end the illegal occupation of Northern Cyprus.”

“As such, we commend Rep. Nicole Malliotakis for introducing a resolution that clearly articulates Turkey’s violations of the rule of law regarding Cyprus and advocates for the correct legal solutions needed to put an end to Turkey’s violations. Critically, the resolution also highlights President Biden’s decades-long engagement with the Cyprus issue and calls upon the Administration to make Cyprus a top foreign policy priority. In the wake of President Erdogan’s push for an unacceptable ‘two-state’ solution for Cyprus, it is essential at this moment to have a strong and bipartisan response from Congress. This legislation meets this need.”

AHEPA Supreme President George G. Horiates said that “the near 47-year illegal invasion and subsequent occupation of the Republic of Cyprus, a U.S. strategic partner and EU-member nation, by Turkey, a failed NATO-member country under the Erdogan regime, remains to this day an unacceptable act; one that is a gross violation of the rule of law, human rights, and democratic ideals.”

“We commend Congresswoman Malliotakis for her leadership as the sponsor of this important and timely bipartisan-backed resolution that calls for the Administration to prioritize ending Turkey’s illegal occupation of Cyprus. We also thank the legislation’s original co-sponsors, and we call for its swift passage. It is time for the Turkish government’s intransigence, and its antiquated and objectionable positions on the Cyprus issue, to come to an end.” he said.